Last year, the first MLS edition of the Cascadia Cup worked out quite nicely for the Seattle Sounders. Two early home draws — thanks consecutively to a late Futty Danso goal for the Portland Timbers in the pissing rain and an incredible stoppage-time goal of the year candidate for the Vancouver Whitecaps from Eric Hassli — created early drama. But then Seattle claimed the Cup emphatically with two away wins, including a competing goal of the year candidate from Fredy Montero in Vancouver to seal the deal.

Unfortunately, last season might have been both the first and last Cascadia Cup competition with a balanced schedule, as MLS' new leaguewide unbalanced schedule has tossed all of the smaller Cup competitions that rely on balanced league play like yachts in a storm. This season the Sounders play each of their Cascadia rivals twice away and only once at home, so the degree of difficulty is high for holding the Cup another season. And yet, based on last year's results and the history of the Sounders overall, playing on the road is not an insurmountable challenge.

For Vancouver, this season is less about Cup glory and more about recovering from a very disappointing year one in MLS. At the end of last season, the divergent courses of the two Cascadia expansion teams were clear to everyone. Vancouver, focused on long-term success and continuity with its existing club and academy structure, was doomed to years of irrelevance, so the narrative went. And the Timbers, with a willingness to load the roster with foreign attacking talent, was more competitive out of the gate, coming close to a playoff berth in year one.

But it only took one offseason for the script to flip. Now it's the Timbers who are approaching midseason at the bottom of the table and the Whitecaps who flew out of the gate, not giving up a goal in 4 and a half games to start the season.

While the Whitecaps couldn't maintain that early season pace indefinitely and they eventually succumbed to Chris Wondolowski, as so many teams do, there's no question the team is playing better in year 2 under Martin Rennie than they did in year 1 under Teitur Thordarson and Tom Soehn. That change in leadership has been accompanied by both tactical changes and a significant change in personnel.

The attack has become a three-headed beast led by Hassli and supported by the additions of last season's first overall draft pick Omar Salgado and Cascadia's favored son Sebastien Le Toux, who was cast off by the Philadelphia Union in Peter Nowak's apparent plan to turn the Union into a U-23 team.

The right side of the defense was replaced with ferocious Argentine Martin Bonjour in the middle to pair with US international Jay DeMerit and savvy Korean Y.P. Lee — veteran of top European leagues — at right back. And in the midfield Jun Davidson returns from Japan to reunite with Rennie — his old Railhawks coach — to solidify the defensive mid role.

One of the major outcomes of that roster overhaul is that the Whitecaps are a defensively stout team despite playing a nominal 4-3-3. That's largely because all 3 of their attacking players have significant defensive presence. Hassli is a player so determined to get the ball back that he picks up a central defender's quota of yellow (and red) cards every season. Le Toux is legendary for his relentless effort and work rate. And the young Salgado seems to be learning from the examples of those two as he tracks back on the left side. Here's an average position map from Vancouver's home win over San Jose last week: 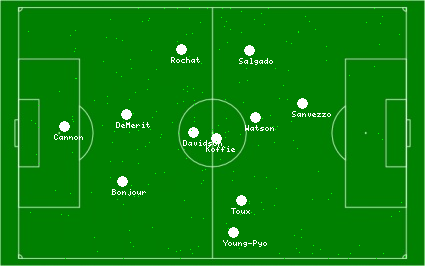 Note that in this match Camilo was filling in for Hassli in a similar role up top, but Hassli is much more likely to drop back than Camilo. Meanwhile Salgado and Le Toux both drop back on the left and right wings respectively to often function as wingers or even midfielders. This gives Lee on the right (and to a lesser extent Alain Rochat on the left) license to overlap forward and participate in the attack. It's a defensively stout 'attacking' formation and its effects can be seen in the fact that Vancouver has lost only 3 of their 10 games this season despite having scored more than 1 goal in a game only once.

That's an offensive record that is not likely to improve against the Sounders, who have by far the best defense in the league by Goals Against. As long as Seattle stays composed and organized in defense, the Vancouver forwards will have to come out of their shell and press much further forward than Salgado and especially Le Toux are accustomed to if they are to provide consistent threat. For that reason I wouldn't be surprised to see Camilo, Davide Chiumiento, or even rookie forward Darren Mattocks in the starting lineup to provide more pressure on Seattle's defense.

At the other end, Bonjour and DeMerit compare favorably to Jamison Olave and Nat Borchers, the two Real Salt Lake centerbacks who successfully stymied the Seattle attack in their last match. The return of Alvaro Fernandez from injury will hopefully provide some creative spark which has been missing in recent matches, and probably even more importantly the week of rest for a team that hadn't had any for almost a month should reinvigorate Fredy Montero and Eddie Johnson, who both looked gassed early in the second half last weekend.

Fernandez playing could be particularly effective against Vancouver, who rely on Lee on the right flank to generate attack. If he's kept under pressure by Fernandez on the wing, he can be snuffed out of the Vancouver attack. Without any significant speed (assuming Mattocks doesn't start) that will leave Vancouver to rely on relatively ponderous counterattacks from LeToux and Salgado, set piece attacks (which Seattle has been effective against all season, when the wind is below hurricane speed), and the glowing, pearlescent right boot of Eric Hassli, which can send a scorching ball on frame from anywhere on the pitch when he isn't using it to stomp on an opposing defender.

Dealing with those balls will be the young Bryan Meredith, but so far the dropoff from injured starter Michael Gspurning to Meredith has been negligible, as last year's Kitsap Pumas starter has shown maturity and confidence in managing balls in the box as well as lightning reflexes in what should have been at least a save of the week nominee against Dallas.

Leo Gonzalez may also be out, but Marc Burch is arguably the starter at left back now anyway. The only other significant injury question is Brad Evans. Andy Rose has settled right into Evans' role of winning midfield balls in the air and providing occasional offense in the middle, but the veteran clearly has more experience and composure there and the team plays noticeably better when he's on the pitch to manage the central midfield.

The Whitecaps look almost completely injury free, and so this is likely to be a matchup of starting roster against starting roster, on a full week of rest, and with only a short haul for the road team. No excuses with this match. The team with the better players and the better breaks will win.