Stats: Shot Rates and the Outliers in New York and Toronto

Share All sharing options for: Stats: Shot Rates and the Outliers in New York and Toronto

Last week I started work on our crunchy power rankings and I noted that the biggest difference from what you'll see in a typical power rankings at this point in the season is that I had Toronto FC being an average team, rather than the hapless, impotent basement team that they are in the standings and pretty much every other list of teams in order of not-terribleness. Another team that was a bit of a surprise in the reverse direction was the New York Red Bulls, who are a hot team at the top of the Eastern Conference in the standings, but the crunchy power rankings have them as one of the worst teams in the league.

Now I want to go into some detail on why those two teams differ so much from where the stats-based rankings would have them and what it says about shot rates. First, without looking, guess which of those two teams has taken more shots this season, considering that Toronto has scored 7 goals and New York 25. Given the context of the question, you might guess something was up, but I think most people would guess New York. Actually, Toronto has taken 141 shots to New York's 134. We've talked a lot on the site over the years about shots, and about how the rate of shots that are on goal and the rate of shots on goal that become goals generally regress to the mean, and so using shots as a measure of chance creation is a fine approximation. Here's an article I wrote on the topic last year.

But Toronto and New York have become extreme opposite outliers on the rates of shots that are on goal (and become goals) to the point that I'm not sure it's tenable anymore to assume that they will regress. A useful rule of thumb is that around 1/3 of shots are on goal and about 1/10 shots becomes a goal. These guidelines are close enough in MLS this season, which as seen a total of 2729 shots, 942 shots on goal, and 266 goals. So about 1 in 2.9 shots are on goal and about 1 in 10.3 shots goes in. 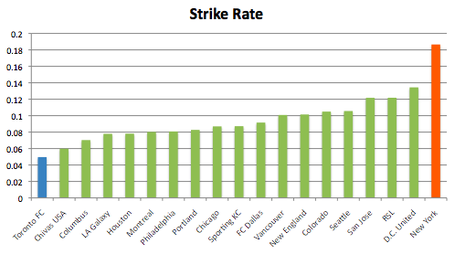 One thing about goal scoring statistics is that they can be dominated by just a few players. Let's start with New York. Of their 134 shots, 69 — over half — have been taken by two players: Kenny Cooper and Thierry Henry. Henry has scored 9 goals on 34 shots (26% strike rate) and Cooper has scored 10 on 35 (29%). Those are absurd strike rates. For comparison, last year's golden boot co-winners Dwayne de Rosario and Chris Wondolowski finished with strike rates of 17% and 15% respectively. But is it just luck that's getting so many balls into the net? After all, last season with the Portland Timbers Cooper had a strike rate of 10.3% — bog-average. Henry's? 21.5%. Whoa. So why did he only score 14 goals last season? Because he only took 65 shots. This season he's nearly doubled his shot rate without compromising his accuracy. And is it possible that Henry's quality is at least partly responsible for Cooper's newfound scoring ability? Here's a piece of evidence. In the 5 games that Henry has completely or mostly missed with injury, Cooper has scored 3 goals in 17 shots for a strike rate of 17.6%. Still good, but half what it is in games when Henry plays alongside him.

Now let's look at Toronto. They've spread it around a little more, but 98 of their 141 shots have come from 6 players. The leader in shots is Ryan Johnson, who's scored 1 goal in league play on 28 shots, for a comically bad strike rate of 3.6%. The moment I saw Johnson's name, an alarm went off in my head, because he's shown up in our stats articles in the past. For example, in this article I use him as an example of a player with an unusually low strike rate and therefore someone who might be due to rebound. He even got top billing in the accompanying photo and caption. Well, it turns out that he was not due for a rebound year. In 2011 for San Jose and Toronto he scored 3 goals in 46 shots for a strike rate of 6.5%. Better than his 2010 year of 2.7%, but not good. With three years of stats to look at, I'm comfortable coming to the conclusion that Ryan Johnson isn't unlucky. He's just a really bad striker. Consider how good San Jose has become now that he's been replaced by Steven Lenhart. And consider how bad Toronto has become now that he's the offensive focus. My apologies to the Johnson family, but facts are facts.

And how about the rest of Toronto? Their player with the second-most shots is young firecracker Joao Plata. He's a player a lot of people (including myself) like, but this season he's scored 0 goals on 19 shots. Obviously, that's a 0% strike rate. And even if he had got one of those in, he'd be at 5%. Next is Danny Koevermans with 2 in 16 for a fine 13%, but then Julian de Guzman is 0 for 12. The only player on the team with a decent strike rate is Reggie Lambe with 2 goals in 12 for 17%, but his meager contribution can't come close to making up for the incredible number of wasted shots from the other Toronto attackers.

So I think we have to rethink some conclusions about shot rates. It's true that for a vast majority of MLS players, shot rates will regress to a similar level. But some players — like Thierry Henry — so outclass the rest of the league that expected shot rate should be substantially higher than league average. And some players — like Ryan Johnson — are demonstrably such profligate shooters that they should never be expected to rise to league average. I'll be revising the algorithm for the crunchy power rankings based on these data, and in general I'll be carefully looking at strike rates to see how common these significant outliers are.