When certain teams appear on the upcoming schedule, you feel a sense of — if not dread, then at least caution. There are teams that seem to always play Seattle tough and create an anxious, frustrating game. Perhaps for you that's the Los Angeles Galaxy or Real Salt Lake. Or even a team not as recently dominant, but who can still stymie the Sounders, like the San Jose Earthquakes.

The Columbus Crew are not one of those teams. Their name showing up on the schedule is like a breath of fresh spring air and a promise of fun for the whole family. Not only have we never lost to them in competitive play, but the wins have been some of the most memorable and joyous games in Seattle's short MLS history. It's like Christmas in summer.

Our first win against the Crew was in 2009, when we broke their 22 game home unbeaten streak thanks to Roger Levesque's first ever MLS goal and Schelotto's missed penalty. They went on to win the Supporters Shield that season, but we left a big thorn in their side. Then there was 2010, when we were all wondering whether newly acquired veteran European forward Blaise Nkufo was going to handle MLS play well enough to produce, and then he goes and scores a hat trick on Columbus in a 4-0 beatdown on the road. And last season I had to sneak away from a wedding to pick up the home match at half only to find that we'd already dropped 4 goals on them en route to a 6-2 thrashing, our most potent MLS match in history.

But even those pale to the US Open Cup final in 2010, just a couple of weeks after the Nkufo match, when Sanna Nyassi's implausible brace (including a deflected goal off of his knee) in front of both of my kids and my in-laws in the southeast corner meant that we'd be repeat Cup champions.

So you can understand that I get a little excited when the Crew come to town, or when we go to their town. Sure, we'll lose to them eventually. Just like we'll lose to the Chicago Fire eventually. But it'd take a lot of losing to make up for the joy that we've extracted from Columbus so far.

This season the Crew continue the slow decline they've suffered ever since Sigi Schmid left for Seattle after their MLS Cup and Supporters Shield double in 2008. In 2009, they repeated the Shield, but lost to eventualy champion RSL in the first round of the playoffs. In 2010, they were an above average Eastern Conference team who once again lost to the eventual champions in the first round. In 2011, they barely made the playoffs and then lost in the newly invented wild card round. And thus far in 2012 they're a below average team even in the weak East.

Much of that can be chalked up to injury. Their list of injured players is large enough to impress even Seattle fans, who are very familiar with the look of a gameday injury report the length of a short story. Out are starting keeper Will Hesmer, Lenhart replacement (and lookalike) Tommy Heinemann, onetime perennial defender of the year Chad Marshall, and solid young defender Rich Balchan, along with a handful of others. That leaves a team composed of Eddie Gaven and a bunch of players you've never heard of unless you watch MLS closely. Even their big offseason signing Milovan Mirosevic may be out this match with a groin pull.

But for all that, they haven't played poorly. Other than a 4-0 pounding at the hands of the New York Red Bulls (who are pounding everyone these days), they haven't given up more than 2 goals in a game all season. And despite the long travel, they've never been overly troubled playing in the Pacific Northwest. For all of those memorable wins I talked about, they've picked up draws in Seattle before. 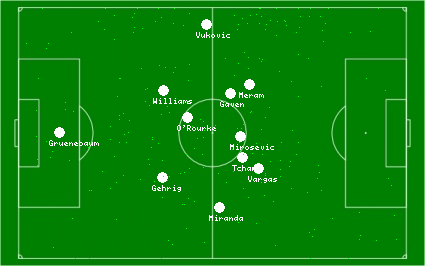 The Crew are, in theory, playing a diamond, with Danny O'Rourke in defensive midfield, Gaven and Tony Tchani on the sides, and Mirosevic in the hole as playmaker behind forwards Justin Meram and Olman Vargas. As you can see from the average position map against the Earthquakes in midweek, Vargas and Meram drop pretty deep (keeping in mind this was a road match). That may help account for their offensive struggles, as they've only scored 2 road goals all season (for comparison, Seattle has scored 2 goals in every road game, save for the shutout in DC).

So I think you can expect a similar game to the one Columbus played in Portland earlier in the month, when they packed it in, tried for a set piece or counter goal, and ended up settling for a scoreless draw. Of course, Seattle is much less likely to suffer a scoreless draw as Portland this season, but the earlier the Sounders can score, the less the Crew can rely on settling into a bunker.

If Mirosevic is indeed out, the Crew will be leaning heavily on Gaven to create chances and Meram to finish them. The second year player had a goal of the week candidate when he curled a shot from a ridiculous angle around John Bush.

On defense, the Crew have been relying heavily on backup keeper Andy Gruenebaum to make big saves and clean up after a defense that's become somewhat porous without Marshall in the mix. That should increase pressure on the fullbacks to stay at home, especially on the road, and further limit them to a bunker and counter strategy.

For Seattle, the injury situation continues to slowly improve. But this is another midweek game between two weekend matches in a long, dense stretch of matches that finally comes to an end next week in US Open Cup play. So don't be surprised to see some healthy scratches on the offensive end. Mauro Rosales, in particular, has been banged up despite playing and seems likely for a rest, or at least a substitute appearance. It's even more likely given that a home game against the Crew shouldn't be the stiffest test of the season. And Alvaro Fernandez is still recovering from a thigh injury that may argue for both of the wingers to be given time off.

On the other hand, I think improving the chemistry between Eddie Johnson and the rest of the offense is important enough that it's probably worth running him out there for another start. Johnson has shown he can be very dangerous when he's connecting well (see the flick on for the game-tying goal in Vancouver, for example), but he can also be out of the game for long stretches or wasting chances if he's not connecting well.

So I'll take a flyer and guess David Estrada or Cordell Cato starting on the right, Alex Caskey on the left, and Johnson and Fredy Montero up top. Brad Evans is still doubtful, so based on that I'd have to slot Andy Rose in, who's played well enough in Evans' absence thus far. Also, Michael Gspurning is still out, but Bryan Meredith has been a capable replacement (though the 2 goals in Vancouver were the first where you could argue that a different keeper could have made a difference).

This is a team we play well against, and even with a few offensive subs, we match up with them very impressively, especially at home. It's also our last home game (at least at CenturyLink) for nearly a month, when Sporting KC come to visit on June 20. Given that and the 2 week break the team will get after next week's US Open Cup match, there's no reason not to play aggressively and break through the Crew bunker as early as possible, like a child rushing for the stocking on Christmas morning.