Seattle's run of games over the last 4 weeks has been epic. Since a two week break in April, at the end of the day the team will have played 8 games in 29 days. Seven games played just in the month of May. That run started off well with home wins against the Los Angeles Galaxy and Philadelphia Union, but since then the team has sputtered.

We saw it in the first half at FC Dallas, when the team played poorly against an awful team, but Fredy Montero came in as a halftime sub to turn it around. Then we saw it in a home loss to Real Salt Lake, in which the team had the better play but couldn't score. Then in Vancouver another terrible first half saved in a rejuvenated second half. And then at home against Columbus, we showed little offensive creativity and despite at times dominating, we gave up 2 goals on 2 shots on goal and couldn't find a way to score.

The run ends tonight at Chivas USA. Sure, we have a home match against the Atlanta Silverbacks in US Open Cup play next week, but we should absolutely not be saving players for a home match against one of the worst teams in the second division. Losing this match, or just playing poorly, would leave a bad taste in our mouths until we pick up MLS play again in mid-June against Montreal. That's a long time to have to stew over a loss.

And unfortunately, Chivas is a team that's inexplicably played the Sounders well. Despite only being a playoff team once in the three years that Seattle's been in the league, we have a drawn record at 2-2-3. That's a better record than a lot of very good teams have against Seattle. They've been especially tough in Carson, where we finally beat them for the first time in 4 tries in the last regular season match of 2011 (in which Mauro Rosales reinjured his knee before the playoff matchup with RSL and. . anyway, moving on..)

This season they're once again scuffling around the bottom half of the Western Conference trying to scratch into the playoffs, but may have been rejuvenated by a recent flurry of moves that netted them two out of favor players in Danny Califf from the Philadelphia Union and Juan Agudelo from the New York Red Bulls.

There's also the addition of onetime Seattle stalwart James Riley at right back in the offseason and Juan Pablo Angel, one of the best strikers in MLS history, who joined the team late last season after the Galaxy jettisoned him to make room for Robbie Keane. This is now a formidable roster, and they showed it in their last three matches, when they earned road draws against the Red Bulls and San Jose Earthquakes, the two teams at the top of each Conference, and then won at home against the Galaxy for the first time since 2007. Now they invite Seattle to their own last game before a long break and no doubt will give their best match. 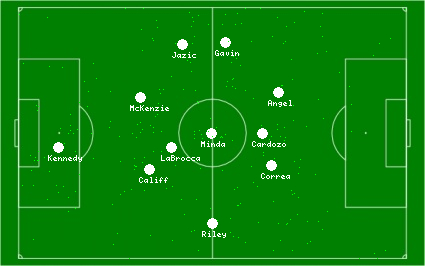 In the New York match, Chivas played a sort of skewed 4-1-3-2, with Nick LaBrocca as holding midfielder, Oswaldo Minda in front of him, Blair Gavin on the left, and Paolo Cardozo as advanced midfielder behind Angel and the second striker (who in this match we expect to be Agudelo). The weird thing here is that there's no right midfielder. In the official lineups on the MLS site, LaBrocca is the right midfielder, but that's not where he played. They're effectively playing a sort of diamond, except with a central midfielder (Minda) instead of a right midfielder, and that right midfield space was covered by Riley (who we know likes to get forward). Against the Galaxy, with Alejandro Moreno back in the lineup, LaBrocca was on the right. So we seem some willingness on the part of Robin Fraser to be tactically flexible and deploy players (especially LaBrocca) where he sees a need.

The Seattle roster situation has degraded a bit since we got most of our short-term injuries resolved. Osvaldo Alonso is out serving a two game suspension for his studs up tackle late in the Columbus match. Adam Johansson suffered a hamstring injury in the same match and is out. With Patrick Ianni still out with a back injury, our defensive depth will be sorely tested. Zach Scott is essentially a lock for right back, leaving Jeff Parke and Jhon Kennedy Hurtado in the center. That's certainly not a bad back line, but there are no quality backups, so any injuries in warmups or the game could put us in a bad position. And replacing Alonso will be difficult. Andy Rose has shown flashes of being a solid defensive presence in midfield in filling in for Brad Evans. He may well do the same for Alonso, but over the last season it's been Servando Carrasco who's deputized for the Honey Badger and we haven't seen much of him this season.

On offense, there are fewer injury concerns. Mauro Rosales is still banged up, but doesn't seem acutely injured. Alvaro Fernandez seems largely recovered. Neither has played particularly well in the last few weeks, but hopefully we can chalk that up to injury recovery and a dense stretch of games. Fredy Montero has been very durable and is sure to be in there. Eddie Johnson also didn't have a good game against Columbus, but I'm sure the team wants to continue improving the chemistry with the rest of the team. If he does sit out, you could see a return to the Montero/David Estrada pairing that featured a bit early in the season.

Tactically, Seattle has become a bit predictable. You're going to see a lot of balls to the right wing where Rosales will duel Ante Jazic to try to get crosses into the two forwards. Less often it'll go left, where Fernandez will try to get by James Riley to create opportunities. If those don't work, we'll punt it directly into Montero and Johnson and hope for a good bounce.

For the Chivas attack, there will have to be some chemistry developed between Angel and Agudelo. They're similar players — both poachers who rely on good service to get them the ball in the box where they can work some magic — and it may take a while for them to figure out how to play together. Providing that service will be Cardozo or Moreno, and usually it'd be Alonso tasked with suffocating that supply. Hopefully his replacement can do the same job. LaBrocca provides an Evans-like ability to provide trailing offense from the midfield and he has a decent long shot that we'll have to respect.

Overall, this is yet another game where Seattle should be favored based purely on talent and long-term consistency, and yet we've seen week after week that the Sounders haven't been able to translate that talent into results, either offensively or defensively. With this being the last MLS game in a long while, this one is as much about digging deep and maintaing some pride than it is about x's and o's. I think we'll know within the first 10 minutes whether the team is mentally prepared for this one or not. Another slow start could doom us to stewing over a 4 game winless streak for the next three weeks.