Seattle Sounders vs Philadelphia Union Scouting Report: For Me to Doop On!

Share All sharing options for: Seattle Sounders vs Philadelphia Union Scouting Report: For Me to Doop On!

The Philadelphia Union followed a pretty typical expansion team trajectory. In their first season, they had a lot of talent but were really bad, because nobody knew how to play together. Then in their second season they gelled as a team and made the playoffs with a Goal Differential as good as Real Salt Lake's. And then, for some reason, they veered wildly off script and into a ditch as they decided in Year 3 they would go into rebuilding mode.

Just look at the roster from last year ordered by appearances and compare it to the team that started their last match against the San Jose Earthquakes. Ranked first is Sebastien Le Toux — also their leading scorer by a good margin — who was shipped to Vancouver for cash after he was shopped to Bolton in the EPL. Then begins a run of defenders in 2nd-4th (Danny Califf, Sheanon Williams, and Carlos Valdes) who started on Saturday. Fifth in 2011 appearances was Brian Carroll — out injured versus San Jose. Sixth: Justin Mapp, now in Montreal. Seventh: Danny Mwanga, started on the bench. Eighth: Faryd Mondragon, back to Colombia. Ninth: Roger Torres, injured. And so on.

Obviously the Union can't do anything about injuries (a truth the Sounders understand well), but the rotation of previous starters to the bench and out of the team has created a massive overhaul in the offense and midfield. With the relative stability in defense and the rebuilt offense, it's probably not a coincidence that their defense has been fine this year — with barely over a goal a game allowed — but they've struggled to score goals. They haven't scored more than 1 goal in a game all season.

If they do manage to right the ship offensively, they'll have to do it without their coach on the sidelines. Peter Nowak will be serving the last game of his suspension for involving himself in a post-game scrum against Chivas (and honestly, if you had to pick one coach who'd do that...) and Gabriel Farfan remains out for red card he picked up in the same game. That plus the general fluidity of the roster and the returns from injury means that your guess is as good as mine when it comes to the Union midfield and forwards. I think we can be confident Freddy Adu will be there. It sounds like Carroll will be available again. And I suspect Danny Mwanga will get a start as they try to find a way around Osvaldo Alonso. 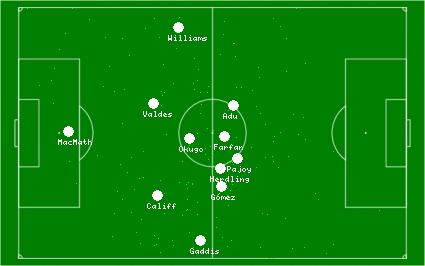 You can see that the Union are definitely not a wing team. Their attacks come through the middle, where Alonso and two of the better central defenders in the league are stationed. Behind them will be the young Bryan Meredith filling in for the injured Michael Gspurning. But the Union don't really have an advantage there either, as the other net will be minded by Zach MacMath, who was taken 24 spots ahead of Meredith in the 2011 SuperDraft. Rarely do you see a goalkeeper starting in MLS a year after being drafted, and even more rarely do you see two such players facing off.

The Sounders' lineup is largely set. Alvaro Fernandez is the only usual starter facing injury, and it's still unclear whether he'll be able to play tomorrow. Otherwise only fatigue after a Wednesday game would affect the lineup decisions. After a game off, Adam Johansson should be good to go at right back again. Mauro Rosales will have to play 3 games in quick succession if he starts tomorrow, but he was pulled fairly early from the previous two, perhaps to save him for this game. Fredy Montero is an iron man and Eddie Johnson seems to be developing a rapport with the rest of the team — a process you don't want to interrupt by benching him unless he really can't go.

So I expect the Seattle roster will look a lot like Wednesday's, but with Meredith in goal and I suppose I wouldn't be shocked if it was Alex Caskey over Rosales with another game on Wednesday in Dallas. So the Union have to face a mostly intact team that's only given up 3 goals this year with an offense that's struggling to score. Sure, they might boot a fortunate one in, but it's unlikely we'll see the 2-0 result that they got last season in Seattle.

At the other end, Valdes and Califf might be the best center back combo in the league. Johnson will have a very tough time trying to hover between them and post them up. Better to go around them by attacking the flanks (made much easier if Johansson plays) or pulling them into a high line with shots from distance. Hopefully now that Montero got off the schneid with a goal of the year candidate, he'll be reliably homing shots on frame, which will put the young MacMath under enough pressure to force a young keeper mistake, and then let the defense do its thing.