The Seattle Sounders have deservedly risen to the top most of the power rankings floating around the MLS media world after winning 3 games in 8 days, but with that honor comes the significant caveat that 6 of their 8 games (and all but one of their wins) have come at home. And their two road games were at D.C United and Chicago Fire, two teams not playing well even in the relatively weak East. So FC Dallas, who jostled with the Sounders and LA Galaxy for top of the table through most of 2011, should be prepared to be Seattle's first significant road test.

Except they're conspiring to downgrade that test from a midterm to a pop quiz. First, Dallas is playing on even shorter rest than Seattle after playing on Sunday night, and their players should be even more fatigued given that they had to do extra running playing 9 on 11.

But fatigue isn't their only problem. If you asked knowledgeable fans who Dallas' most important field players are this season, you'd probably get, in some order, Brek Shea, David Ferreira, newly signed striker Blas Perez, team leader Daniel Hernandez in the midfield, and George John and captain Ugo Ihemelu on the back line. But when the match kicks off under the lights of what was once Pizza Hut Park, few if any of those players will be on the pitch.

Ferreira is out at least for a few more weeks after foot surgery in April. Perez and Hernandez were both red carded in that debacle of a match against the Colorado Rapids on Sunday and will be suspended for at least this match. Ihemelu is out with a concussion. And Brek Shea is questionable attempting to return from turf toe, a notoriously nagging injury that he suffered a couple of weeks ago. And any depth they'd hope to draw on has been compromised by injuries to Ricardo Villar, Andrew Wiederman, Carlos Rodriguez, and Bobby Warshaw. The matchday roster may have to be built by inserting whatever warm body comes along, which might be why they're likely starting Portland Timbers castoff midfielder James Marcelin after only a week on the club.

Given the ramshackle nature of the Hoops' lineup, it'd be hard to try to tease out any tactical nuggets from past games, but we'll give it a shot anyway. 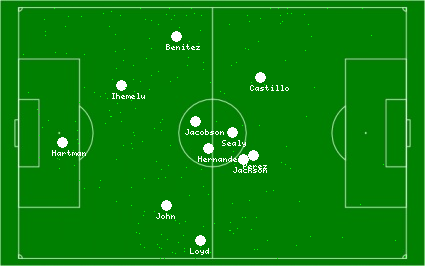 Against Colorado they played a cramped, defensive game in the middle even before the sendings off, and once they went down it was bunker and counter all the way. Even at home we may see a bunker and counter style given the jury-rigged roster (and Seattle's history of being susceptible to counterattack goals). The speedy outlet for that counterattack would be Colombian Fabian Castillo. A midfield tandem of Marcelin and Andrew Jacobson offers little pace to supplement Castillo, so he may be a man alone on the counter.

Another source of offense would be fullbacks Zach Lloyd and Jair Benitez, who are both capable of pushing forward into the gaping wing areas left in the Dallas attack if Seattle lets them. On that note..

The Sounders roster, in stark contrast to Dallas', is as healthy as it's been in a long time. Mauro Rosales seems fully recovered from his injury and Sigi's consistent pattern of substituting him in the second half of recent games should mean he's available to start again and pin back the 33-year-old Benitez. Alvaro Fernandez isn't even listed on the injury report after missing the last few games with a quad injury and he'd be a welcome sight on the other wing. If he can start and Rosales, Fredy Montero, and Eddie Johnson do as well, it'd be the first time all season that the intended starting four in the attack actually start.

At the defensive end, Leo Gonzalez will be missing the game after MLS suspended him for a two-footed stomp on Sheanon Williams (while only Leo will ever know for sure, it looked pretty intentional to me). But Marc Burch has been an entirely capable left back and there shouldn't be any defensive drop off. On the other side, Zach Scott has been so effective at shutting down Brek Shea he got his own Sounder at Heart meme out of it. But Adam Johansson is the more likely starter if he's fit. Gspurning remains out and we've yet to see whether Bryan Meredith can be relied on to back him up since he was barely tested against the Philadelphia Union.

But unless Dallas can find a way to cobble a group of mostly substitutes into a dangerous force, we may have to wait until Real Salt Lake comes to town on Saturday before we know whether Meredith is or needs to be a capable backup.