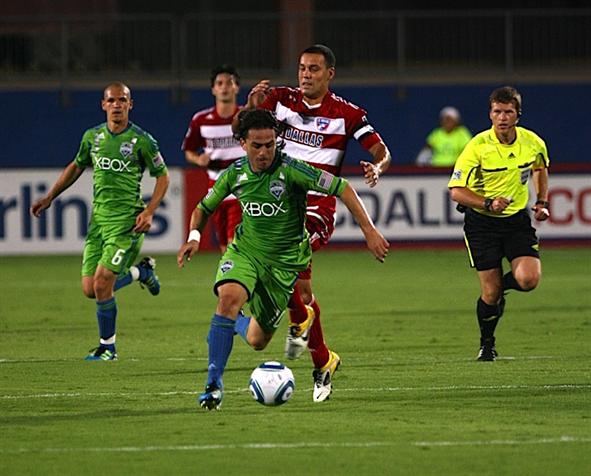 For the second week in a row, the Sounders have been gifted with a mid-week match against a team missing some of its core players. Last week saw the Galaxy travel to Seattle without the help of its Euro-DPs Beckham and Keane. This week, Seattle travels to Texas to face off against a FC Dallas squad that will be missing Daniel Hernandez, Blas Perez, and Ugo Ihemulu. While Hernandez and Perez are both suspended for red cards, Ihemulu was put on the injury report with concussion symptoms. As if that wasn’t enough, Brek Shea is still listed as questionable due to a nagging injury.

Until Sunday, I thought I would target two players in this preview. First, I wanted to take a look at Sounders Public Enemy #2 Daniel Hernandez (obviously Brian Mullan is #1). While not an impact player himself, Hernandez made an impression on Mike Fucito with his elbow and Seattle supporters via twitter last season. Although his absence will likely mean fewer bumps and bruises for Fredy and Mauro, it will also remove some emotion from the game. I would love to see the Sounder hang a big number against a lineup including Hernandez.

The other angle I wanted to explore was new striker Blas Perez. For the last few years, Perez has been bouncing between various clubs on short term loans. However, now that he has signed for Dallas, Perez has settled well. With three goals in six games, Perez has shown that he has what it takes to find the back of the net. If Brek Shea can find the form he displayed last year, this combination could be very effective. Unfortunately for Dallas, at least one of these players and possibly both will be missing tomorrow evening.

While these were the story lines I wanted to write about, I feel like I could almost re-post last week’s Galaxy preview. FC Dallas will be featuring a significantly weakened lineup. They will be missing three players from the spine of their team: a striker, a holding midfielder, and a center back. And while the Sounders have displayed their depth this year, Dallas has struggled even at full strength.

The statistics in this matchup all favor the Sounders. Even though the Sounders have two games in hand against Dallas, they have more goals, assists, and shots. While Dallas has given up fourteen goals in its ten games, the Sounders have surrendered just three goals in their eight games.

When you factor in the players that Dallas will be missing, the Sounders cannot afford to let these points slip. And while I can always make the case that the Sounders should win the game in front of them, I’m not being overly optimistic in this case. The Sounders are a far superior team to FC Dallas even if Dallas was full strength. With the weakened lineup Dallas will feature, there can be no excuses this week.