Tomorrow's match against the Impact marks the beginning of the second dense stretch of games the Sounders will have to play this season. If Seattle manages to make the US Open Cup semifinal by beating the San Jose Earthquakes, they won't have a full week between games until after the July 18 friendly with Chelsea — a run of 10 matches in one month. And while the last dense stretch was evenly split between home and away games, only 2 or 3 of the 9 competitive games in this run will be at home, depending on whether Seattle hosts that potential Cup semifinal. It's fortunate that Seattle is such a strong road team. If the Sounders make it to the Chelsea friendly still in playoff position in MLS and still alive in the US Open Cup, I'd consider that a successful first half of the season.

So maybe it's a good thing we start off with something of an intramural scrimmage. The Impact aren't quite as Sounders-dominated as they were when Mike Fucito was on the team, but they're still worthy of the Sounders East name, with Sanna Nyassi and Tyson Wahl getting significant minutes and Lamar Neagle and Miguel Montano in reserve. And of course Preston Burpo as goalkeeping coach.

It also keeps alive Seattle's run of attending expansion team stadium transitions. After opening Qwest in 2009, we were the first guests to expansion Philadelphia's PPL Park. Then in 2010 were were the last team to play in expansion Vancouver's Empire Stadium before moving to BC Place. And now we open up Saputo Stadium with expansion Montreal. 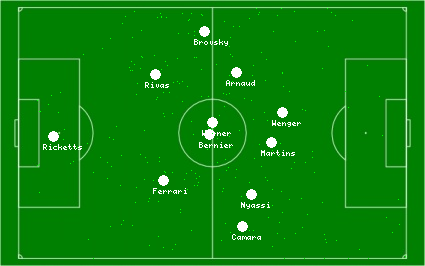 This average position map from their most recent match against Colorado shows Montreal playing a pretty standard 4-4-2 with little positional switching, showing a clean division of player responsibility. Both Nyassi and Davy Arnaud on the wings suck inside to the middle, relying on the fullbacks to provide width. Two holding midfielders provide enough additional defense to allow those fullback runs, though the fact that the Impact have shut out only two opponents all season and have given up more goals a game than every team but Toronto suggests that event that hasn't solidified the defense. On offense, rookie Andrew Wenger occupies the box and draws defensive attention while Nyassi does what Nyassi does. . using his speed to get open and then sending the ball somewhere — occasionally on frame.

The Seattle roster will finally be well rested and should see this as an opportunity to pick up points before fatigue again becomes a factor later in the month, as it clearly did when the last dense section of games petered out into a winless stretch. Unfortunately, the loss of David Estrada to a training injury reduces attacking depth, but the emergence of Alex Caskey and the continuing recovery of Steve Zakuani should be able to offset that loss. And a rested Mauro Rosales will hopefully revert to the MVP candidate he was last season.

On defense the break gave Patrick Ianni and Adam Johansson time to heal, which means Seattle's defense should be able to remain the stout wall that has given up the fewest goals of any team this season, though they may not yet be available for tomorrow's match. Still, the Parke/Hurtado/Burch/Scott line is perfectly capable of keeping the Montreal attack under control, even without the services of Osvaldo Alonso, who will be serving a suspension.

The Alonso loss will be an opportunity for either Andy Rose or Servando Carrasco. Rose has emerged in the last month or so as a promising backup for Brad Evans, but Carrasco was Alonso's deputy last season.

There won't be many matches during this stretch when Seattle will feel like they have a significant advantage, thanks to the frequency of away matches, the tough home matchups with the Sporks and Rapids, and the sheer density of matches. But this match is one of them and it would be disappointing if we can't take full advantage.