Sporting KC Scouting Report: A Spork I See Before Me, the Handle Towards My Hand

Share All sharing options for: Sporting KC Scouting Report: A Spork I See Before Me, the Handle Towards My Hand

As we know, MLS is a parity league. And this season has been particularly paritous (yes, that's a word, spellcheck), especially at the top. Real Salt Lake is the current top team in the standings (as well as our power rankings), but they only won 5 of their first 9 games and at one point had a 3 game winless streak. In fact, the 3 game winless streak seems to be the thing the cool kids all want this season. D.C. United, next in the standings, began their season with one. The San Jose Earthquakes are in 4th and they had a 3 game winless run in May that's taken much of the luster off of their impressive start to the season. The Sounders, of course, are never content to just follow the crowd, so we recently invented the 5 game winless streak.

Sporting Kansas City opened the season on an absolute tear, roaring to the top of the standings and ruining all of our jokes about the weak Eastern Conference by winning their first 7 matches. Then they went on their own winless streak (4 games, not 3, because they're also not a team to follow the crowd) and it seems the national media went to sleep on them, looking instead to New York or RSL. But this team is still that team that was crushing opponents both East and West. In two of the four non-wins they outshot their opponents by massive margins and were mainly the victims of bad luck. And now they're on a two game winning streak that they're looking to extend against a team that's looking very vulnerable.

Their reputation is that they do it with offense, and with a deep rotating cast of forwards and wingers and an offensive minded central midfielder in Graham Zusi, it's easy to see why. But they also happen to have given up the fewest goals in the league — an honor held by Seattle until the Sounders laid a huge egg in Montreal. Aurelien Collin has become a force at the back and Julio Cesar is a solid defensive presence either at central defense or as a defensive midfielder. Chance Myers is one of the best fullbacks in the league at making attacking contributions without compromising his defense.

And on top of all that, this is a team that must really want to get one over on Seattle. Because our legacy of scoring injury time winners on Kansas City is ridiculous and hilarious. Starting with the Mike Fucito winner in 2010, then a Jeff Parke header on almost the last play in Seattle last season, followed by TWO injury time goals to steal a game in Kansas City in August. No Kansas City lead is safe against Seattle and you can be sure they'll want to rack up a lead too big to overcome in the final seconds. 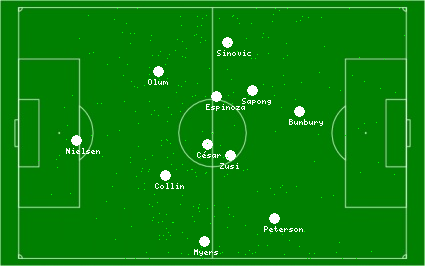 In this average position map from the game against Toronto FC, it was C.J. Sapong on the left wing and Jacob Peterson on the right. Typically that's Bobby Convey and Kei Kamara, but Convey is out with injury and Kamara just returned from playing for Sierra Leone. If he can't play that'll be a small mercy for Seattle, as Kamara is an important offensive presence for Kansas City when he's on the pitch.

The midfield is now anchored by Cesar, who's moved there from the back to help solidify the defense. Roger Espinoza plays slightly forward of him, but is a defensive presence as well and a ferocious tackler who's picked up a healthy share of yellow and red cards. They give Graham Zusi license to roam forward from the middle to generate long shots and create opportunities for Teal Bunbury and Sapong in front.

It's a 4-3-3 that can just as well shift to a 3-4-3 when Myers pushes forward into the attack, as he may try to do more often if Kamara can't play. Especially when Kansas City has possession, which they do a lot, it can seem like an endless wave of attackers that individually are some of the best in the league and collectively can be almost impossible to fully contain.

The Seattle defense will be bolstered by the return of Osvaldo Alsono, whose absence was sorely felt last weekend when Montreal Impact players were allowed to wander around the top of Seattle's box to create attacking opportunities. The extra rest and the morale boost of having just become a US citizen should hopefully spur Alonso to top Honey Badger form, which could help shut down Zusi and Espinoza in the middle.

That would shunt the Kansas City attack to the wings, which would normally be a bit of a Faustian bargain as Kamara and Convey are both dangerous players coming in from the corner, but that's not the best use of Sapong and Peterson is a serviceable MLS midfielder, but is not Kamara. Containing both the middle and the wings would encourage Myers to come further forward which could create opportunities for the Seattle attack.

That's an attack that has sputtered in recent games despite the fact that it's a largely healthy group. Mauro Rosales and Alvaro Fernandez have both been putting in plenty of healthy minutes on the wings, but have very little to show for it. Rosales in particular has suffered a significant drop in form from his near MVP season last season. Some have speculated that playing Zach Scott on the right over the departed James Riley and the injured Adam Johansson has overly isolated the team captain and stunted his game. Johansson remains doubtful for the match, so if that's the problem Rosales is going to have to find a way to fight through it.

The forward pairing of Fredy Montero and Eddie Johnson has also been healthy, yet underwhelming. The flashes of ability from Johnson are apparent, but he has yet to develop the chemistry with Montero or the wingers that leads to flowing, dangerous attacks. And his obvious frustrations with officials and little tics like refusing to close down the keeper to force him to pick up the ball are unnecessary distractions.

Still, for all that, Seattle is one of the best teams in the league. And even a disjointed, banged up Sounders squad is good enough to beat all but the best opposition. Unfortunately, Sporting Kansas City is the best opposition. I hate to see the winless streak continue, but a draw here would be nothing to be ashamed about. Then again, if we are drawing it just means that the goal we score in the last few seconds will be the winner. Sorry, Nielsen.