Share All sharing options for: War Metaphors And Sports

The longer readers of Sounder at Heart know there are certain supporters songs I don't like due to their use of certain war metaphors. Even new readers will notice that there is very little imagery around battles and violence in our posts about soccer. This is by choice and captures much of how I feel about sports and why I discovered a passion for the game.

These aren't battles. They aren't war. They are merely contests. The participants often see each other postgame and enjoy their time together. A Sounder has participated in a Timber's wedding party. During the break Jeremiah saw Mike Fucito with former teammate now foe Roger Levesque.

My feelings are probably why I'm upset that ESPN, MLS and the Portland Timbers used an illustration that evokes violent images in our collective consciousness as an advertisement for a game. Yes, there is some justification for it. There was a brilliant tifo in the Timbers USL era where they had a giant lumberjack cut down a Space Needle. Still, you would never see ESPN and MLS co-opt imagery of falling building in New York City or Washington DC in a marketing campaign. You would not see it because of the horrible images of the attacks on Sept. 11.

Here's the thing: OBL and al-Qaeda targeted other cities, other buildings. At one point the Space Needle was targeted to be dropped during a New Year's Eve celebration. That attack failed due to a combination of luck and intel. But that potential for violence was there. It happened. The scars aren't as deep, nor should they be.

As with any use of violence to sell things or events, they must be carefully chosen. The poster produced from Seattle's side is simpler, less evocative and about pride of place. 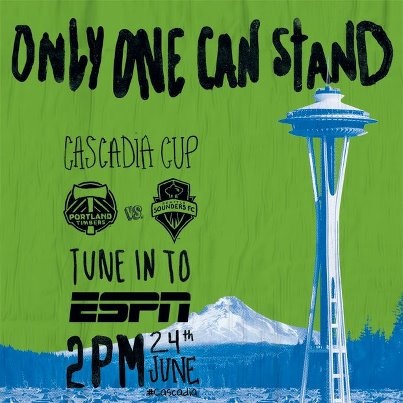 It is hard to associate violence, except perhaps in the words "Only One Can Stand." Though that phraseology is fairly common in how we talk about sporting contests.

A building being forced down is a much more powerful image. It is one that would not be used concerning many cities. Some may respond about how this makes me, or even Seattle fans, soft.

I would say that their equating sporting contests with brutal wars and terrorism shows a clearly misplaced priority in life. The scars my friends carry the rest of their lives from time in Iraq, Afghanistan, Haiti, Somalia and Bosnia will never go away. The "wounds" of Timbers fans from losing the Cascadia Cup match at home in 2011 are gone already.

Sports is an escape from reality. And at certain times powerful imagery can be used to sell sports. This wasn't one of those times, as the New York metro based elements of the decision process would not do it with their own icons. As someone who crafts stories with words, it can be difficult to manage to share the importance of a contest without the war metaphor (sometimes I fail), still it can be done. You see it in ESPN's coverage of the Euros, where the war metaphor is actively avoided, even though some of the banners in the stadia do not (see "This is Russia").

It would have been better if ESPN had avoided it in this case as well.