The diamond is a fairly common formation in soccer. For many, particularly those of the EA Sports FIFA generation, it is seen as the epitome of formations. It's ability to focus offense through the singular point of the number ten (or CAM) means that highlight reel passes from these 10s to the two forwards in front are prolific. It can have issues. The biggest challenge is that when a diamond faces a great defensive midfielder play stagnates. The one CDM can take the CAM out. There are ways around this, but the basics of the diamond are such that limits channels forward unless the fullbacks are quite good or the shuttling duel box-to-box mids can play overly wide (see the New York Red Bulls of 2011).

Seattle's diamond chose a different route in its deployment as an anti-4-3-3. Much of how it deployed had to do with the Sounders #10 and captain Mauro Rosales. The traditional winger tends to run the show from wide positions. He will work small plays with a forward, his right back and Brad Evans and/or he will boom crosses towards the heads of Eddie Johnson and Alvaro Fernandez. None of these work particularly well if he's at the point of the diamond.

While there are still two forwards ahead, as a standard there is no longer the option of the square pass to the CM. There will also be longer passes back towards the shuttlers than to the rightback in the standard shape. Rosales passing numbers were relatively poor as he completed only 75%. His crossing was much less effective. Maybe more interesting though is that he had 4 key passes and an assist.

But he didn't do this in the conventional fashion. 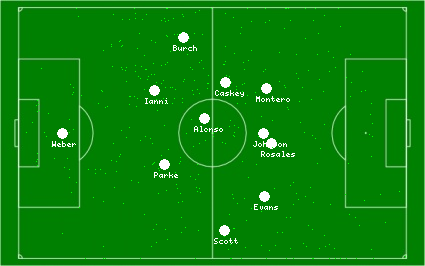 Sidereal's average position map for the match shows Mauro in a very high position, ahead of the forwards even. This is both a demonstration of a flaw in APMs (see the heat map and Mauro was quite high but almost always wide) and a look at how Seattle had empty spaces defensively where Evans would usually be.

If Opta had been out back in 2009 we might see that Seattle used a similar version of the Diamond back then. For a few matches one Freddie Ljungberg lined up as the CAM. His press conference and announcement led many to believe this would be a permanent solution. It wasn't. MLS teams learned that to stop Seattle's Ljungberg as CAM he merely needed to be hacked down. Ljungberg and the team learned that he was better in space beating one defender rather than two.

A similar situation will come soon. Rosales wasn't as good as he typically is. And against KC he wasn't facing off against Kyle Beckerman, Diego Charra and Jeff Larentowicz. All three are primarily defensive mids faced by the Sounders in the next couple of weeks. The left backs of MLS aren't as good as those men are. After Mauro beats that collection of All Stars and National Teamers he still has to thread the ball past centerbacks.

That may be why Rosales flashed out wide quite a bit. There are less defenders out wide. While the Diamond made sense against Sporting Kansas City, one should not expect it often. Seattle's best two attacking players are Fredy Montero and Mauro Rosales. The Diamond nearly elimiated one of them as an option.