Share All sharing options for: Scouting Report: Sounders at Timbers - I'm A Lumberjack And I'm OK

The Portland Timbers are not a good MLS team right now. Sure, they have the nobility of support (as Seattle fans we've been through that with the Seahawks, Sonics and Mariners), but the team itself is poor. John Spencer and those above him are trying to rebuild on the fly. They recently added Danny Mwanga and Mike Fucito to add to the offense. But things down in Stumptown are poor. Heading into one of their biggest matches of the year, things got worse when they found out centerback Hanyer Mosquera is suspended for three matches. Their ability to reinvigorate the season will depend on a defense using their 3rd and 4th best CBs (Brunner is out as well), the ability to intergrate the new forwards into their diamond and using Darlington Nagbe at the point.

If things in this game of soccer are spinal, Portland's is broken. Only Diego Chara is clearly capable in the middle right now. At forward Kris Boyd has struggled to get service; Mwanga didn't practice most of the week due to an injury; Fucito is returning to fitness after being ignored in Montreal; and Nagbe's central shift is recent. For all of Seattle's recent struggles, things are worse down South.

With weather supposed to be relatively warm and wet one could think back to the May 14th "Excuses" game and think that the Timbers are better off. That would ignore that to this point of the season the Sounders are a better dead ball team than Portland. Seattle is net three goals and Portland only net one on set pieces. Run of play numbers are also in Seattle's favor (net 0 for SEA to net -4 for PDX). Weather won't be an advantage.

In many ways for Portland this is like Seattle's game against KC last Wednesday. The road team is statistically better by any measure. Only home field should make up the difference. That and the possibility that Sigi Schmid focuses his lineup on the upcoming US Open Cup match. 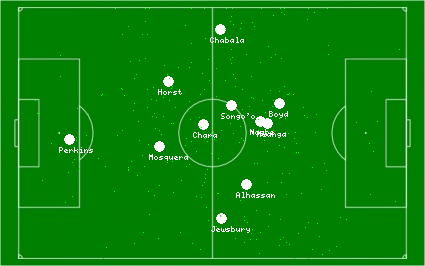 Our good friend that normally does these scouting reports is away, but he did provide the average positions map. That's good. Making me pay attention to the Timbers though? That's not so good.

You'll notice that their diamond is a bit different. It is poorly cut. Who would pay for such unbalance? Their CAM and WF are in the same space (familiar refrain?) while the left mid Songo'o takes a very central position and Alhassan plays much wider than in a typical diamond. Lack of balance will put more pressure on Chara, while also forcing forward action from the two fullbacks.

A team with experienced CBs can afford that. But Portland does not have that luxury. Their CBs will be matching up with MLS vet Eddie Johnson with Fredy Montero confusing them by being in places a forward should not be. One should expect Seattle's wingers to press high often to force compensation from Jewsbury and Chalaba.

Defensively, Seattle's CDM/CM pairing should be able to deal well with the flood in the central third. While there will be more numbers, they are typically quite close to each other. The passes available to the Timbers will be short and ineffective. If Adam Johansson is back at right back he will be freed to get forward a bit. If it is Zach Scott he will be able to add some help defense on Boyd, since there shouldn't be much pressure from his side.

Again, the numbers are good.

And so are the tactics and shapes. But, it is a rivalry match just a bare two days before an Open Cup match. Spirits will be high, as will the energy in the stands. No matter what the paperwork says this will be a game for the ages. Or it won't--it could be just like most Seattle-Portland games with three points in Seattle's favor.

Aside: Lumberjacks cut down Timbers, so why is that their mascot?