New England Revolution Scouting Report: You Tell Me That It's Evolution

Share All sharing options for: New England Revolution Scouting Report: You Tell Me That It's Evolution

The New England Revolution — one of the original MLS dynasties — were good for so long that it took a while to sink in that they were bad. Though they never won the final prize of an MLS Cup, they won the Supporters Shield in 2005 and made three consecutive finals from 2005 to 2007. They still made the playoffs in 2008-2009 and so the non-playoff finish in 2010 could be seen as an aberration. Until an abject 2011 made it clear that the current plan wasn't working and lost coaching institution Steve Nicol his job.

In the same vein, it might be taking a little while to sink in that the Revolution are now good. In our Crunchy Power Rankings, which rank teams based on stats correlated with long-term success, they rank second behind only the San Jose Earthquakes and are first in the most important stat — net shots on goal. The fact that they're in the bottom half of the Eastern Conference standings obscures the play of a team that's doing a very good job on the field, especially at home.

The main spark of that transformation has been Frenchman Saer Sene, a Bayern Munich reserve player who's emerged quickly as one of the best attackers in MLS. With US international Benny Feilhaber providing service and another attacking option the Revs have scored as many goals as Sporting Kansas City and one more than the Seattle Sounders. The midfield has also been bolstered by the addition of Lee Nguyen, who was ejected by the Vancouver Whitecaps and is understandably playing with a chip on his shoulder. They're supported by onetime perennial All Star holding midfielder Shalrie Joseph, who may be thriving in Jay Heaps' more possession-oriented system. Joseph also solidifies a defense which is young and may look like a weakness, but which is disciplined and strengthened by the rapid development of AJ Soares. 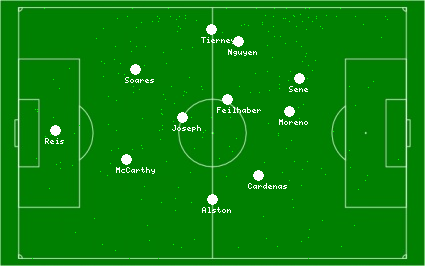 This average position map from their home draw against the Columbus Crew shows a well-defined formation which you'd probably call a 4-1-3-2, with Joseph behind a bank of three midfielders including Feilhaber and the two side midfielders, and Sene and Colombian Jose Moreno in a forward band of two. Their next match — a 2-2 draw with Toronto — was very similar (with Clyde Simms filling in for the absent Joseph) but with Federal Way native Kelyn Rowe at right mid and with teen sensation Diego Fagundez paired up top with Sene.

That seems to be the major open question in the Revs lineup — who to pair with Sene at forward. Fagundez and Moreno have been joined by Blake Brettschneider in a rotation that suggests they haven't found an answer yet. The three players bring very distinct skill sets and it may be a case of Heaps selecting a player based on the opposition.

That may be a bit difficult in this match because the Sounders' roster continues to be unstable. In fact, the only two players who will reliably start in definite positions every match are Fredy Montero and Osvaldo Alonso, and Montero is suspended for this match thanks to his late red card against Portland. So besides Alonso, who could we see?

In defense, Adam Johansson may be able to make a welcome comeback from injury. Zach Scott has been a decent backup at right back, but a decent backup shouldn't be starting every match, as he has for a long time now. At left back, Leo Gonzalez made a return from injury for the Open Cup quarterfinal on Tuesday, but that's a short turnaround from a recovering player, so it may be Marc Burch.

In central defense, Jeff Parke is questionable with 'dizziness', which may be related to migraines which have bothered him occasionally through his career. That would recommend a central defense of Patrick Ianni and Jhon Kennedy Hurtado, though Ianni also played on Tuesday.

Brad Evans was in that match as well, though as a right back to free Scott for central defense. If he doesn't play, the usual deputy would be Andy Rose, but he started that match as well. I would expect Evans even on the short turnaround, just to help stabilize the midfield against Feilhaber and Joseph. Alvaro Fernandez also played on Tuesday, and if he doesn't go left wing would probably go to Alex Caskey, who played well early in the season but has tailed off recently. It could also be available to Steve Zakuani, though almost certainly not as a starter.

If Sigi continues with the experiment of Mauro Rosales as a CAM, that would push Evans to the right. Otherwise Rosales on the right makes sense. Then again, with Montero suspended we're short of attacking options, and Rosales in Montero's usual Treq/WF position could make sense. In which case right wing is probably Cordell Cato's. And the second forward would presumably be Eddie Johnson, or maybe Sammy Ochoa.

So in short, who knows? It'll be yet another juggling act by Sigi and company.

Tactically, the left wing may be the focus of attack if Fernandez can trouble whoever subs in for the injured Revs right back Kevin Alston. That would argue for Rosales to play centrally to help provide services to that channel, and for a fast player on the right to pull defenders, which argues for Cato. That combination would leave Evans on the bench.

Sene is a very dangerous player, with good footwork and the ability to shoot from anywhere in the box. The central defense will have to communicate well to keep him covered and I suspect the best matchup might be Ianni and Parke, if he can go.

This is not the easy match that some Sounders fans are hoping for it to be, based on the Revolution's 2011 results. This is a much better team than that team, and with the cross-country travel and short rest, it's every bit as tough a match as the others that Seattle has played in this tough stretch. A draw here would be very unsatisfying for a team desperate for a win, but it shouldn't be considered a huge disappointment either.