Share All sharing options for: Consistent Rosters Are Winning Rosters

On a recent episode of Nos Audietis I mentioned that earlier in the season I had compared MLS teams' number of different starters to their points per game and found a pretty strong correlation, and that the Sounders were off the charts in defying that correlation. And that recently they've simply regressed to what you'd expect based on that amount of roster churn. Since there was some interest, I'll actually share that data and the results.

I originally ran the comparison in early May, just after Seattle had won at FC Dallas and were looking unstoppable despite a significant amount of roster instability due to injuries. Here's the total number of unique starters each MLS team had fielded up to that point: 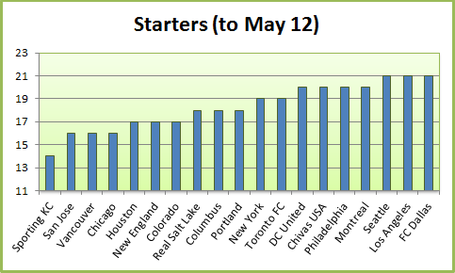 If you'll remember back to mid-May, Sporting Kansas City had just gone on a losing streak, but had won their first 7 matches of the season in one of the hottest starts in MLS history. Probably not coincidentally, they did so fielding only 14 different starters, the fewest in MLS up to that point. The second fewest was a tie between San Jose (hovering near the top of the West), Vancouver (who were fourth in the West and rising), and Chicago (who were fourth in the East). At the other end of the chart, you have FC Dallas, who have been one of the worst teams all season, and Los Angeles, who started out incredibly disappointingly after a championship season. Next to them Montreal, Chivas USA, and Philadelphia. Nothing more to say really. But sticking out like a sore thumb, tied for the most starters, was Seattle with the best PPG in the league.

Here's a scatter plot to help visualize the difference. The horizontal axis is the number of starters to that point and the vertical is points per game: 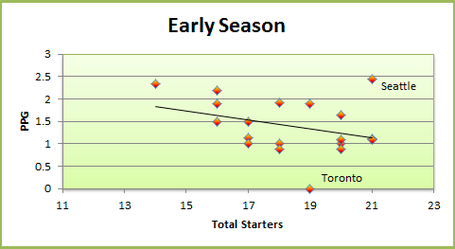 You can see the trend line and the points clustered fairly close around it. There are two significant outliers. One is Toronto, who were still on 0 points. And no matter how many players you start, 0 points in 8 games is an epic amount of awful. And the other major outlier is Seattle, even further from the line than Toronto, but in the good direction.

It's important to note that I'm not implying causality in either direction. It's possible that teams that lose do a lot of roster rotation to right the ship. It's possible that teams that do a lot of rotation for other reasons (most notably injuries, but also international absences, etc) lose a lot. It's possible (even likely) that it's both to some degree. But whichever way the causality goes, the correlation is strong. Consistent rosters are winning rosters and winning rosters are consistent rosters. Except the Sounders by mid-May.

Here's the same scatter based on the data through yesterday's matches: 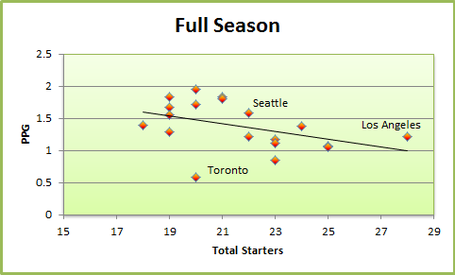 Toronto remains a significant outlier in the bad direction, but Seattle has simply moved back towards the line. They're still above it, but not by much. And they did it pretty precipitously, by both stopping the adding of players and by dropping a lot of points. You can see that Seattle's now played 22 starters, only 1 more (Andrew Weber) than the 21 they had played by May 12.

So on the one hand you could argue that Seattle's drop in form occurred when they weren't integrating any new players, but it's important to keep in mind that they were still churning the roster, just with players who'd already made their debut. So here's a different look. It's the average number of players per match who didn't play in the previous match — which I'll call gameday roster churn: 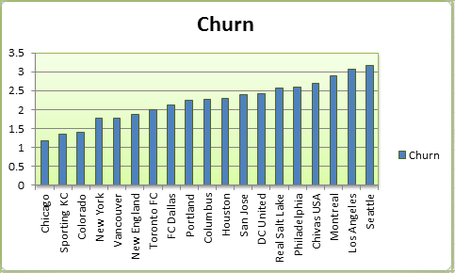 Once again Seattle is number one, among a lot of teams that aren't very good. So even if Seattle no longer leads the league in number of distinct starters, we're still the league leaders in number of changes from game to game, and are one of the very few teams that can maintain a winning record while dealing with a high level of roster churn.