Cross country trips are never good for MLS teams. At one point last season coastal teams were completely winless playing on the opposite coast through some amazing amount of games and I started referring to it as the Coast To Coast Curse. That eventually ended, but those 3,000 mile trips remain brutal for teams.

One upside of the new unbalanced MLS schedule is that it reduces the amount of opposite coast travel. And tomorrow's match against New York will mark the last time Seattle has to travel to the East Coast in the MLS regular season, which will be a welcome milestone. Counting Montreal as an East Coast team thanks to the travel distance even though it's not technically on the Atlantic, Seattle has played 3 opposite coast matches so far — a draw against DC United, a big loss to Montreal, and a draw with New England. That record suggests that maybe a draw tomorrow would be a reasonable result — something we've been saying a lot these past few weeks.

But if it is a draw, it's very unlikely to be a scoreless one. The New York Red Bulls haven't been involved in a scoreless draw all season. And in only 5 of their 18 matches this season has even one of the two teams been shut out — twice for New York and three times for their opponent. This is a team with a potent offense and a very questionable defense — a combination that promises fireworks.

Their offense was even more potent early in the season when Thierry Henry and Kenny Cooper were clicking on all cylinders and in one stretch the team scored 15 goals in 4 matches. But when Henry went down with a knee injury they looked significantly less dangerous, and even though the French DP has been back since May, he's clearly not 100% healthy and he hasn't scored in MLS play since the original injury.

Seemingly to help boost the offense, they traded for beloved ex-Sounder Sebastien Le Toux, but to get him they traded away Dane Richards — their fastest offensive player, so it sounds like a wash offensively. Their real problems are in the defense, where Rafa Marquez has struggled to stay healthy, motivated, and relevant.

Here's an average position map from their 1-1 draw with Toronto, the last match that Henry played: 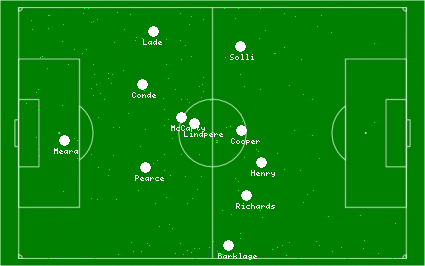 One interesting thing to note here is that Joel Lindpere is playing at the same level as Dax McCarty. Effectively, they're playing as two holding midfielders even though both — especially Lindpere — have shown that they can be effective attacking midfielders. This is likely Backe's attempt to shore up the porous defense, though it comes at a significant cost to those players' ability to participate in the attack. It's effectively the Empty Bucket formation that the US played under Bob Bradley with two holding midfielders and two attacking wingers. But New York just traded away one of their attacking wingers. And Jan Gunnar Solli on the other side is out with a hamstring injury. Instead the offense would seem to come from Brandon Barklage bombing forward from the right back position to create crosses, and from sitting around hoping that Henry does something magical.

Seattle is no stranger to injuries, but they go into this match as healthy as they've been in some time. Fitness remains an issue as they're still stuck in a dense stretch of games that's gone on since the international break. But there's really little reason to save any energy for next week's friendly against Chelsea, so this can be treated as the last match for a week and a good opportunity to stretch the team's fitness.

Eddie Johnson's contributions up top have exceeded the expectations of all but the most optimistic preseason Johnson supporters. As his chemistry and timing with the rest of the team — especially Mauro Rosales — has developed, he's become a deadly attacker. Fredy Montero, while still having a hard time scoring goals, remains a dangerous player who can shoot accurately from anywhere at any time, meaning defenses can't focus on Johnson without giving up huge opportunities.

The return of Adam Johansson to right back and Leo Gonzalez to left seems to have shored up the defense a little and we remain three deep at quality center backs. Really, the Sounders have their ideal starting lineup available for selection, except for at keeper, where Michael Gspurning is either just healthy enough to make this match or just unfit enough to barely miss it after months out with a hip injury.

The key to scoring goals on New York will be to just continue creating the opportunities that Seattle usually creates and waiting for the Red Bulls defense to make a mistake that seems almost inevitable at this point. The withdrawn role of their central midfielders should give Osvaldo Alonso opportunity to become more a part of the attack, which is always a good sign for Seattle.

At the other end, stopping the Red Bulls attack is a question of stopping the service to Henry and Cooper. Consistent threat from the left wing, either from Alvaro Fernandez or Alex Caskey, can keep Barklage at home and unable to provide crosses, and an aggressive Alonso, Rosales, and Montero can keep the two central midfielders pinned back or at least wary of a counterattack. That forces Henry to drop deep to pick up the ball and leaves Cooper isolated in the box and a manageable threat for a center-back double team to handle.

All that said, it's worth repeating that East Coast games are very hard, are rarely won (Seattle only won 1 of 4 last season), and that a draw here would put Seattle on firm footing as third team in the West heading into the friendly break and a second half that's much less dense and more travel friendly (at least until we start talking about CCL matches).