Seattle Sounders fans are understandably tired of the team's 8 game winless streak, especially after snatching a draw from the jaws of victory against the New England Revolution. But any hopes that the run will stop at 8 will have to deal with the very daunting fact that the next match is at Real Salt Lake.

If you piled up all of the factors that make this a tough match, the resulting stack would be taller than Michael Gspurning. In fact, Gspurning not being able to play is one of them, though by no means the biggest. The biggest is that Real Salt Lake is a very good team. Since 2009 only they and the Los Angeles Galaxy have been as consistently good as the Sounders. Then there's the fact that the match is in Sandy, Utah. It's a place where Seattle has won in the past, but it's one of the best home field advantages in MLS, and Seattle's last visit was the very painful 0-3 humbling in the 2011 playoffs.

Then there's the fact that it's a match on short rest after a cross-country flight, though that applies as well to the Lakers, who are returning from Columbus. There's the fact that it'll be a large, boisterous 4th of July holiday crowd; that we'll be without our most important defensive player in Osvaldo Alonso, who is out with yellow card accumulation; that we'll be playing our 3rd or 4th keeper (depending on how you rank them). And, critically, we'll be facing a team that is on a three game losing streak of their own and will be frustrated and hungry for a result.

Add all of that up and asking for a win sounds like irrational exuberance. Even though it would continue our winless grind to nine games, a draw would have to be considered a great result here. Then again, soccer's a funny game. It was a loss to RSL that begun the current winless streak. It would be fitting if a win over Salt Lake ended it.

The basic structure of RSL's formation is as reliable as any in the league. They'll be playing, as they have for many years, a 4-diamond-2 with Kyle Beckerman as holding midfielder and Javier Morales as CAM behind Fabian Espindola and Alvaro Saborio. That tactical consistency is a big part of their success, but that doesn't mean they don't make adjustments. Here are two average position maps. The first is from last match — an away loss to the Columbus Crew: 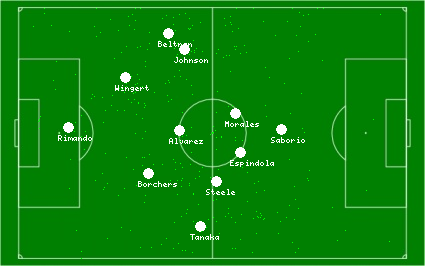 The second is from the previous — a home loss to the San Jose Earthquakes: 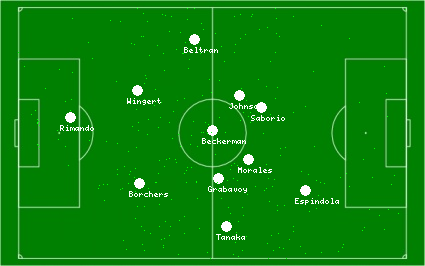 The basic structure is there (with Yordany Alvarez in for Beckerman against Columbus). But against San Jose Espindola played way up high on the right wing, presumably to trouble the Earthquakes' left back Justin Morrow. And Will Johnson and Ned Grabavoy were sucked in to overload the middle of the field. The object may have been to choke off the supply of balls from the fullback and midfield into Steven Lenhart and Chris Wondolowski.

Against Columbus, Espindola was pulled in behind the more advanced Saborio and Johnson retreated way back to basically co-exist with left back Tony Beltran. That may have been a response to Columbus overloading the right wing with Emilio Renteria, Chris Birchall, and Tony Tchani. Neither set of adjustments worked well enough, since RSL lost both matches, but nevertheless they show the positional flexibility in the basic diamond.

So which Seattle roster will they be gameplanning against? Seattle hasn't used the same lineup in any match this season and with Alonso out that trend is likely to continue. The Honey Badger has only missed three previous matches, twice with David Estrada in the starting 11, so that certainly won't be replicated. The other was the horrid match against the Montreal Impact, and it's possible we'll replicate that lineup if Meredith is in goal and Andy Rose replaces Alonso, but perhaps the lesson of that match is that we shouldn't.

But other than Alonso and Meredith, the lineup is potentially the first choice Seattle eleven. Fredy Montero and the red hot Eddie Johnson will paired again for the 10th time this season. If fitness allows, Mauro Rosales is available on the right wing and Alvaro Fernandez on the left, with Brad Evans between. Or Rosales and Evans could switch in a continuing effort to jump-start Rosales' season by giving him space.

Some have speculated that Rosales is suffering from the lack of Adam Johansson on the right to provide attacking support. The big Swede returned after a long injury in New England and is also potentially available. Jeff Parke has been upgraded to probable and is likely to play after missing the last match. His partner is more a question of matchups than fitness. Jhon Kennedy Hurtado has not been in the best form, most exemplified by getting torched by Kris Boyd in the Portland match, but he may be the best counter to the speedy Espindola.

A tempting strategy here is the bunker. It's not one Seattle employs often, and it will rely on a midfield staying stout without Alonso and a defense staying stout after not being able to do so for over a month. The image of Beckerman being given free reign with the ball to pick out Saborio has to fill you with dread. But the alternative is try to play Seattle style and dominate possession, again without Alonso, and leave the midfield undefended with probing attacks up the wings. That sounds like a recipe for allowing counterattack goals.

Which thorn Seattle wants to grab may be hinted at by the Badger's replacement. If Servando Carrasco starts instead, the team is likely looking to pack it in. If Rose starts, they are probably prepared to do more attacking. Either way, a point will be an important, if unsatisfying, victory.