Share All sharing options for: Colorado Rapids Scouting Report: Back To Attack

Tomorrow's match between the Sounders and Colorado Rapids is ripe with the kind of drama that catches national attention and it's no surprise that NBC dispatched Arlo White and crew to broadcast this one.

Sigi has been coy about the availability of Steve Zakuani, who had a tantalizing appearance on the bench versus Sporting Kansas City but has not appeared on a gameday roster since. Perhaps it's significant that that was the last home match Seattle has played. It could be that the coaches are making a point of returning Zakuani at home, where a massive and massively appreciative crowd can give him his due. If so, a return in this match would take the drama meter to 11, since it was the Rapids who hosted his horrific leg break and there's no reason to think Brian Mullan won't be on the field.

It also has the potential to be a 10th consecutive winless match for Seattle. A road draw at Real Salt Lake continued the streak, but was no embarrassment and was, I think, one of the best games of the season for the defense. But failing to win at home, and in the only MLS home match in July, would be much harder to accept. Especially against a rival for that important 3rd playoff spot in the West. This is a proverbial six-pointer.

And it was almost exactly a year ago that Conor Casey tore his achilles tendon in a match in Seattle. While complaints about Seattle's artificial surface are not rare, in this case the danger was a natural surface slathered on top of the turf in order to attract Manchester United for a friendly. The temporary grass was spongy and loose and likely contributed to Casey's achilles tear, which didn't involve contact with another player.

In a media world where rivalries get blown out of proportion and exploited for promotional purposes, it's fair to say these teams don't like each other. The fans certainly don't like the Rapids. The Rapids don't like the Seattle fans. Their most likeable player may have been Kosuke Kimura, who they just traded away. It will be chippy, which won't be new to Seattle, who have seemingly had to play physical soccer in every match since Kansas City.

The loss of their iconic towering target man didn't seem to faze the Rapids, who went on to lose only 3 of their 13 remaining regular season matches. And his return this season hasn't improved the team's form either, as they've only won 3 of their 8 played since his comeback. Perhaps they are having a hard time adjusting to the two-forward formation after playing so long with a single forward in Casey's absence. But it's hard to argue they aren't a better team with the target man on the field, as he's a massive presence in the box and pulls defenders away from the another C: Omar Cummings, who can exploit that space with lightning quick attacks.

Here's an average position map from their last match — a home loss to Vancouver: 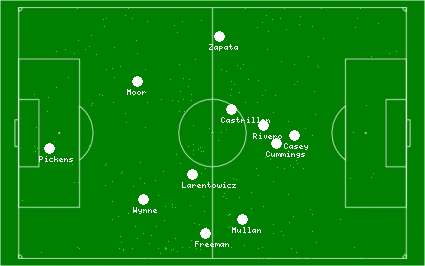 What jumps out immediately is the lack of attacking width. Mullan is a reluctant attacking midfielder barely ahead of the fullback in space. And on the left, Jaime Castillon cuts so far inside it's hard to tell whether he or Martin Rivero is playing centrally. That leaves the attacking flanks to the fullbacks, who have to push up so far to provide attacking width that the defense is in danger of being left exposed.

The defensive center is also left vulnerable, as Rivero likes to get forward and settle into a playmaking role. With an attacking central midfielder, two forwards, and Castrillon as an attacking winger, the center is left entirely to Jeff Larentowicz to control.

Against a team that can maintain possession in the middle of the park and punish roving fullbacks, Colorado seems to have weaknesses to exploit.

The Seattle roster continues to slowly re-assemble itself from the dog days of June and a litany of injuries and suspensions. Osvaldo Alonso returns fresh from his one-match suspension and should help control the Colorado overload in central midfield. Jeff Parke seems fully recovered from his dizziness, and he will be important against the big, athletic Casey. Adam Johansson got a day off against RSL and is no longer on the injury report.

In offense, Mauro Rosales played a lot of minutes in Utah and may be due for a break, which could open up the right wing for Cordell Cato, who could punish Castrillon's tendency to cut inside and leave the veteran left back Zapata isolated. Fredy Montero is evergreen and always ready to play, but his partner Eddie Johnson is the one doing the damage these days. After his two goals against New England, Johnson is now the top scorer on the team, and for all the fretting early in the season about his ability to contribute, he's now tied for 8th in the league. If he can continue to pull defenders away from Fredy, the Colombian may find breathing space in the central attacking midfield again.

Seattle has recently become accustomed to falling back under siege and grinding out results. That's an important skill to have, but at least for this match it's time to return to Seattle's native style: keeping the ball, putting the opponent under siege, and attack, attack, attacking until they give in. And we leave them with nothing.