It's a rare feeling for Seattle Sounders FC; a pause in their near constant action of double game weeks is combined with a rather healthy team. And while there is another player still to join the battle for starting minutes once Mario Martinez joins the team and practices, on Saturday the team could feel an "Ideal XI." Except that this Ideal XI will be different than an MLS Cup Playoff Ideal XI and not just because of Mario Martinez.

While some of the roles seem clear when the team is healthy, others are in near constant flux as Sigi Schmid decides on certain tactical changes. The most obvious of these are the centerback pairing where it is nearly a guess for non-coaches to figure out who is starting. Next most difficult for an outside observer is leftback. One choice is for a more defensive player and the other a more attacking back. The last "battle" is probably at left midfielder where a Honduran national is about to compete with Alex Caskey.

Now with a smattering of All Stars and Designated Players in the rest of the midfield and forward set one could think the Ideal XI is static. That may be a mistake. Sigi has options. The amount of depth on the team means he could put out a more defensive posture and keep a road leg tight. This may have a particular use against high offense teams, or the team could take a more attacking posture.

The Ideal XI is fluid. 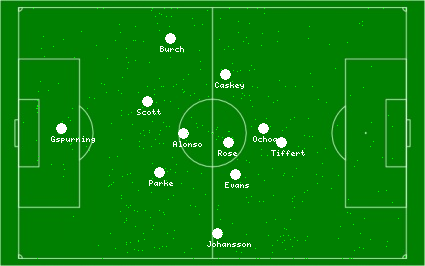 Sidereal's average position map shows a posture that is a different than typical for the team. The wide mids are narrower (there wasn't much switching if any) and the target forward was in a deeper average space than a man who is by nature a box-to-box mid. While the Sounders lost that game, it was quite close to being a point with only a minor set-play defensive error turning a road draw into the 1 goal loss. In the Playoffs a 1-1 road draw has value.

Schmid talked after practice yesterday about how having three non-Alonso midfielders gives him flexibility in lineups;

Evans has shown that he can play in the middle of midfield, he can play wide right, he’s played right back for us, as well. Tiffert, I think can play anywhere—he can play outside midfield, can play inside midfield, can play underneath the striker, as he did in the game against San Jose. He gives us options. Rose is more of a central guy, although we pushed him wide right one game and he did all right there, so I think he’s understanding that better, as well. Him playing wide right or Evans playing wide right is different than [Mauro] Rosales playing wide right. The interpretation of the position is a little bit different, but the tactics—you gain something. Maybe they’re a little bit better defensively there, a little bit less creative offensively. Maybe they are more guys that get on the end of things offensively there, rather than guys that create things offensively there. It changes a bit, but it definitely gives us options having players that can play different positions.

Will there be a "must earn a point game" when the Sounders start a Designated Player on the bench? Maybe. It won't mean that they are giving up on the match. It will mean that Sigi is comfortable starting a wide variety of talent regardless of rest.

Saturday's lineup is likely to be offensive, a near maximum effect. There will be a desire for a show in front of mere 50,000 or so Cascadia fans. Vancouver is also a decent defensive team, maybe more than decent. But next week, on the road at Chivas USA, again with full rest and knock-on-wood health, the lineup could be tweaked and it shouldn't surprise anyone.

Is there an Ideal XI in Schmid's mind? Yes. But that eleven will vary based on game decisions, tactics, rest and the little bit of psychiatry (see Fredy Montero with 5 goals and 2 assists in 208 sub minutes) that any coach has to use. The front six may be the most stable in that ideal, but they aren't permanent. Just as there are tactical decisions along the backline, expect to see those up front too.

That could be the starting lineup. But it isn't the only starting lineup you'll see, even with a fully rested team. Only three of the eight listed as possible bench players haven't regularly started games.