Via press release tonight, Seattle Sounders FC announced that they hired CAA to represent their interests in a new, or renewed kit sponsor after the 2013 season when the current XBox sponsorship ends. To quote the release;

Seattle Sounders FC has hired CAA Sports to explore opportunities in the marketplace for their jersey partnership, beginning with the 2014 MLS season, the club announced this afternoon. CAA Sports will use its expertise and business partnerships to assist Sounders FC in securing the most suitable partner. One year currently remains in the five-year jersey agreement between Sounders FC and Xbox.

But, it's a little complex. Already, the Sounders are one of the larger revenue earners via kit sponsorship, though their sponsorship extends beyond just a front of chest billboard. Only three teams in the EPL clearly earn more annually than the Seattle soccer team. Three teams in the EPL. It goes beyond that. Check the link. Other leagues don't earn tens of millions per team. The 3-5 Million range is pretty typical for teams that aren't in the world's list of HUGE.

Lower down the league, however, teams such as Blackpool and Wolverhampton Wanderers operate on a fraction of these sums. The shirt sponsorship deals for those two clubs are estimated at less than €1 million.

And that's what faces Seattle. Because the rumored challenge to Microsoft is Emirates. The Mid-East based airline is not socially aware (only 50k followers on twitter), but is a huge sponsor of football. Microsoft and the Sounders found a few ways to be more than a billboard. There are Sounders avatars on XBox 360, the Hawk's Nest and center circle are named, and Microsoft is more active on social networks (about 10 times). Both have new offerings to the Seattle market. Microsoft with their next gen game console and Emirates with rapidly expanding service in the United States.

One thing is clear after being around this organization for the four-ish years of its existence is that this is not going to be just some billboard. It will not be a mere gambling website or network marketing program. It will be a shift in how American soccer is sold around the world. While it won't challenge the Deloitte 20, it will be close. Seattle's attendance and local TV ratings are on par with those clubs. It is only their international following that is the challenge. It is more proof that success in the CONCACAF Champions League is as important as ever.

Seattle sent a press release out that they are working with an agency about their next sponsorship. This is not typical in MLS, nor are the Sounders. This is different. This is a brand that has a relationship with the Seahawks and MLS, but bigger than that it is a brand that is its fans. You are why it is valuable.

The full press release follows, but the future is unknowable;

RENTON, Wash. - Seattle Sounders FC has hired CAA Sports to explore opportunities in the marketplace for their jersey partnership, beginning with the 2014 MLS season, the club announced this afternoon. CAA Sports will use its expertise and business partnerships to assist Sounders FC in securing the most suitable partner. One year currently remains in the five-year jersey agreement between Sounders FC and Xbox.

Since entering the league in 2009, Seattle has cemented itself among the elite on the pitch, holding the second-best record in Major League Soccer (MLS) with a 54-29-33 record. Sounders FC is the only expansion team in league history to earn a trip to the postseason each of its first three seasons.

Seattle set an MLS record for attendance with an average of 30,897 during their inaugural season in 2009, only to surpass that mark in 2010 with an average of 36,173 and again in 2011 with an average of 38,498. This season, Sounders FC has continued to set the standard by averaging 41,480. Seattle's current mark would rank fourth in Italian Serie A, and fifth in Spanish La Liga, sixth in the English Premier League, 13th in German Bundesliga.

Seattle's 2012 attendance average would also currently rank fifth in MLB and first in the NBA and NHL. Last season, Sounders FC drew 654,431 fans for MLS matches and is on pace for more than 700,000 fans this season.

Sounders FC television ratings have raised the bar for MLS, ranking first in the league, and would rank in the top third in the NHL and top half in the NBA, according to CAA.

Sounders FC has set the bench mark off the field as well. Seattle has led MLS in merchandise sales each of its first three full seasons. The team's website, SoundersFC.com, is the most visited club website in MLS with more than 48 million page views and six million visitors since the club's launch in 2009. The team has nearly 270,000 likes on Facebook and has more than 50,000 followers on twitter.

CAA Sports is a division of Creative Artists Agency (CAA), the world's leading entertainment and sports agency. CAA Sports has extensive presence in the soccer marketplace, as the agency represents top European clubs Chelsea Football Club and FC Barcelona and also owns and operates the Herbalife World Football Challenge, an annual North American tour of friendly matches between top international teams, which this year included the Sounders FC vs. Chelsea on July 18 at Seattle's CenturyLink Field.

CAA Sports represents more than 650 of the world's best athletes in such sports as baseball, football, hockey, basketball, soccer, tennis, and golf, in addition to coaches, on-air broadcasters, and sports personalities. 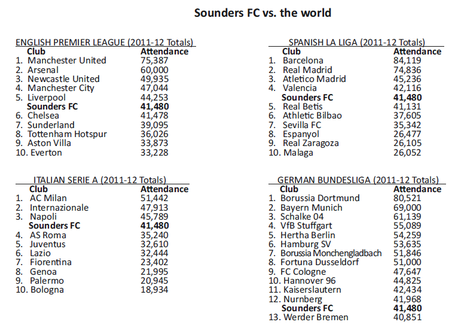