Vancouver Whitecaps Scouting Report: No Excuses Not To Dominate

Share All sharing options for: Vancouver Whitecaps Scouting Report: No Excuses Not To Dominate

As the Seattle Sounders prepare for this weekend's match with the Whitecaps, it feels as if we've transitioned into a new phase of the season. For one thing, the team is coming back from the first full week break since after the Chelsea friendly in mid-July. The relatively long rest has given the team and the fans time to mentally prepare for the stretch run.

For another, the new roster has taken shape. New DP Christian Tiffert has played with the team already, but this is the first match we go into assuming that he'll be a starter. And newly signed Mario Martinez has arrived from international duty and Sigi hinted that he may be available for the senior squad on Saturday. And not least, Steve Zakuani is no longer even listed on injury reports. His return is now all about getting game fitness and technique back, and we should expect to see him take the field for the team increasingly as the season goes on.

And finally, our goals for the season have suddenly and dramatically refocused. Seattle starts every season with five trophies on the to-do list. In the span of just a few days, we lost the US Open Cup in the final and lost any reasonable shot at the Supporters Shield against San Jose. Now we focus on the three remaining. The CONCACAF Champions League is on hold for a couple of weeks, but tomorrow's match has significant implications for the MLS and Cascadia Cups. The rivalry Cup for obvious reasons, but it's just as important for the league championship.

Earning a top 3 spot effectively doubles your chances of winning the league, as playing an extra playoff round takes its toll both in the likelihood of simply losing it and going home and in the extra fatigue compared to the other playoff teams. Right now, by PPG, Vancouver is the team most likely to steal our top 3 spot, and if we let them get any points tomorrow — especially three points — we've made our lives much, much harder than they need to be.

The Whitecaps are a team having a hard time finding an identity this season. After starting off the year on a tear and looking like one of the best teams in the league through the first three months, they started a slow slide that has them barely ahead of the Galaxy for fifth. If the rest of the Western Conference weren't so completely awful, they'd be concerned about a playoff spot slipping away completely. That slide spurred a flurry of roster changes in July, with Sebastian Le Toux, Davide Chiumiento, and Eric Hassli — three of the cornerstone players in the offense — being shipped out and Kenny Miller, Barry Robson, and Dane Richards being shipped in. That's a good chunk of talent, but I'm not sure we can be positive it's a net gain over the outgoing players. And in the interim there's going to be a rough transition as the players get a feel for each other.

The transition looked like it might not be so bad when they beat Real Salt Lake at home 2-1 (though the Lakers have themselves been having a rough time on the road), but a follow-up 2-0 home loss to woeful FC Dallas suggested all is not healthy yet. And tactically. . well just look at this average position map from the Dallas game: 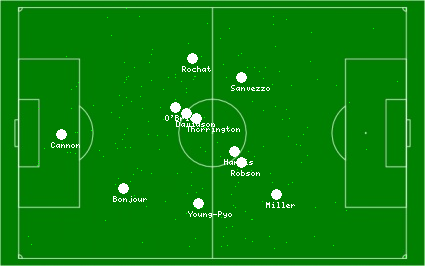 If you know what formation that is, you're a more astute tactician than me. Center back Martin Bonjour was camped out just forward and to the right of Joe Cannon, perhaps to act as a stopper for Brek Shea. Meanwhile his partner Andy O'Brien was hanging out with Jun Davidson and John Thorrington in the defensive midfield. Kenny Miller basically played as a right winger and the rest of the attacking contingent pinched into the attacking central midfield. And it played like just as much of a mess as it looked. Through the entire match they were plagued by missed connections on easy passes. Their entire offense consisted of looking up to find Miller and lumping the ball towards him.

Much to their relief, Darren Mattocks and Richards will be back from international duty to repopulate the offense, but that means there'll be more fresh introductions and lack of understanding across the frontline as they learn to play with Miller.

And probably even more important, the backline will be new as well. Jay DeMerit is likely still out with a concussion and Bonjour, who's been a rock at the back for the team all season, will sit this one out with yellow card accumulation.

The Sounders are as healthy as they've been all season, despite the recent news of Andrew Duran's season ending injury. With a fresh roster to pick from, Sigi's lineup decisions in this one are all about matchups, not about health and fatigue.

Tiffert and Osvaldo Alonso should be locks for the midfield. Eddie Johnson and Fredy Montero up top and Adam Johansson and Mauro Rosales on the right sideline, with Michael Gspurning in goal. The only questions are at center back — simply because Seattle has three good players for two spots — and on the left sideline. At left back neither Marc Burch nor Leo Gonzalez has made a convincing case to be the de facto starter and left wing is a question in the post-Alvaro Fernandez era.

Alex Caskey has taken over recently and has looked good at time, though at other times he's looked like a young player that may not be as reliable as the team needs in a playoff run. That wing is Zakuani's native position and he has recently said that he doesn't think of himself as a forward, but he's still far away from putting consistent minutes there. Left wing also happens to be a familiar position for Martinez. But with his just joining the team it would seem that that position remains Caskey's.

At center back Patrick Ianni has played very well recently, but you could just as well make a case for Jhon Kennedy Hurtado or Jeff Parke. The matchups against Richards, Mattocks, and Miller probably matter most here and at left back. The first two are speedsters, which might argue for a defense that stays more at home. That's probably good news for Gonzalez and Parke.

There really aren't any excuses for this one. The scorching hot weather will be gone, so it'll be a clear summer day in front of a huge home crowd after extended rest with our best players against a team with little familiarity playing their third game in seven days with reserve center backs. If we can't win, or at the very least dominate to a draw, the Sounders will have made a major mistake and shown a weakness that would give us cause to question whether this team has the talent and character to contend for a title.