Share All sharing options for: Chivas USA Scouting Report: Turning Out the Lights

Last week the Sounders helped keep some playoff hopes alive by beating the Vancouver Whitecaps, and in the coming weeks they have a chance to end those hopes with three consecutive games against the two playoff hopefuls left in the West. Today's is the first of two against Chivas USA, a pretty implausible playoff contender. They've stayed in the hunt almost entirely through defense. Their 26 goals allowed is second only to Seattle's 24 in the Western Conference (though Seattle's played two more games), but their 15 goals scored is worst in the league by a huge margin. No other team has fewer than 24, and those are some awful teams. And at home their offense is at its worst. Shockingly, they've scored 6 home goals all season.

One of those goals was a Juan Agudelo strike that earned them a draw in their first matchup against Seattle in May, but that was a weaker Seattle side. It was only 3 days after a match against Columbus, Michael Gspurning was out with an extended hip injury, and Eddie Johnson only played a few minutes off the bench (and had yet to round into form with the team). This time those players are healthy, the team is well rested, and we've added Designated Player Christian Tiffert.

Chivas hasn't stood pat either, trading for Shalrie Joseph at the beginning of August, but judging by their 4-0 blasting at the hands of the LA Galaxy in their last home match, it hasn't improved them enough. Now they'll hope to get their defense back in form while finding some offense through the veteran Juan Pablo Angel, the inconsistent Agudelo, and a bushel of occasionally dangerous midfielders.

Here's their average position map for their last match, a 1-1 draw away at Colorado: 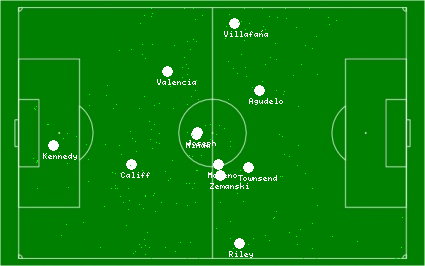 On the one hand it's an aggressive look, with both fullbacks pushed far forward as significant contributors to the offense. On the other hand, it looks like nobody is lined up at forward. Agudelo and Alejandro Moreno were announced as the forwards, but Agudelo barely plays higher than the fullbacks and Moreno averages play behind the midfielders and only barely ahead of the defensive midfield tandem of Joseph and Minda. Chivas didn't have a dangerous attack with this look the entire match until Angel, who definitely has the capability to lurk forward in the box, was subbed into the match. They had two shots on target all match, one of which was the game-tying goal by Angel.

It's a lineup that can be solved by denying service, particularly from the sidelines. That forces Agudelo and Moreno to come deep to pick the ball up from the defensive midfielders, pinning them back as we saw in Colorado. But Alicia from The Goat Parade predicts we'll see a lineup with Angel as a lone striker. That requires a different gameplan, but has its own advantages to the Sounders. Constantly changing the lineup looking for a winning formula denies Chivas rhythm and understanding.

Chivas' greatest asset is Dan Kennedy, who's making a strong case for MLS goalkeeper of the year. His shot stopping ability means that an opponent needs to generate twice as many quality chances as they would have to against an average keeper to score the same number of goals. He may be singlehandedly responsible for Chivas remaining distantly alive for a playoff spot.

The Sounders lineup questions revolve not around finding a winning formula but around how to pack all of their quality options into only 11 places. With a full week of rest and only reserve players injured, a full starting lineup should be available, if only we knew what that was. It should be the first match in which our top 4 offensive threats all start together, with Tiffert in the middle, Fredy Montero and Eddie Johnson up top, and Mauro Rosales on the right. Osvaldo Alonso owns the other central midfield spot. With Adam Johansson available, the rest of the defensive line is a question of picking 3 out of 5 players of roughly similar ability (though Leo Gonzalez has recently staked a claim to be the starter over Marc Burch at left back).

That really leaves only left midfield as a glaring question. If the goal is to shut down the Chivas sidelines, the best option there could be Brad Evans, who's a defensive workhorse even on the wing. If the goal is to overwhelm them with attacking ability, new signing Mario Martinez represents a dangerous option. If the goal is to threaten them with speed, Steve Zakuani is available to play his natural position after scoring twice in the last Reserve match. If the goal is to minimize disruption to the team, Alex Caskey has seen the most minutes there and is a reliable option.

But regardless of who's in the left wing chair when the music stops, this is an offense that should be able to overwhelm Chivas, even with Kennedy at the back. It's an offense that compares favorably to the LA Galaxy's, and they just embarrassed the Goats 4-0 in a game in which Kennedy won man of the match, because without him it would have been 7-0. Two defensive midfielders will shunt attack to the wings, but that's a style Seattle excels at, with Rosales and the overlapping Johansson on the right making life miserable for the opposing left back.

And defensively, the matchup is the best statistical defense in the Western Conference versus the worst scoring team in the league. Agudelo seems to always bring his best game against the Sounders, so complacency will get Seattle in trouble. But just playing consistently and reliably the way they have all season will be enough to force Chivas into desperation to get goals. A desperation that can be punished with skilled counterattacks.

No win is guaranteed, but this is a game Seattle is heavily favored in for good reason. A win draws the Sounders level with Real Salt Lake for second with two games in hand after RSL picked up a scoreless draw in Philadelphia last night. And only 4 points back in the Supporters Shield race to keep us alive for a shot if San Jose (and Sporting KC and New York) stumble.

It would also go a long way to putting the Chivas season to bed, a job we could finish when we meet again in Seattle in two weeks. And that may be a service to MLS. Because a team with only 6 home goals all season still being alive for a playoff spot isn't a good advertisement for the playoff system.