Share All sharing options for: LA Galaxy Scouting Report: The Stars Come Out

Last time the LA Galaxy came to town they were far from full strength. Thanks to a combination of David Beckham's porcelain reticence to play on turf and Bruce Arena's attempt at canny lineup shuffling with another match three days later, the Galaxy's brace of Eurostars stayed home. And they were without Omar Gonzalez, who missed the entire first half of the season with an injury. That left a lineup of Landon Donovan and a patchwork of reserves and out of position defenders.

Arena's strategy backfired — their weakened squad lost here 2-0 and then they lost at home to New York in the following match. And those losses kicked off a run of 5 losses in 6 matches that looked like it would bury any chance at the playoffs this season. But the international break turned out to be a turning point for the team, and starting in June the team went on a tear reminiscent of the Seattle Sounders run in 2010 that brought them back from the brink of disaster into the playoffs. LA has now won 7 of their last 10 and that combined with a total collapse by the Colorado Rapids has suddenly gotten them into comfortable playoff position. And they even have an outside shot at a top 3 finish, which would let them skip the dreaded play-in round. But for that to happen, they'd likely have to pass Seattle. And for that to happen, they'd likely have to win this match.

It's no surprise then that the Galaxy that takes the field in the rematch is expected to be at full strength. Gonzalez is back. Their full complement of 3 DPs are available. And they'll be matched up against Seattle's 3 DPs, thanks to Christian Tiffert getting his visa squared away. Though he won't start, he'll be in the 18 and should he play there's a good likelihood of 6 Designated Players being on the field at once — a confluence of talent rarely seen in MLS.

Here's an average position map from their 3-1 home victory over Chivas USA — the last match to feature all 3 of their DPs. 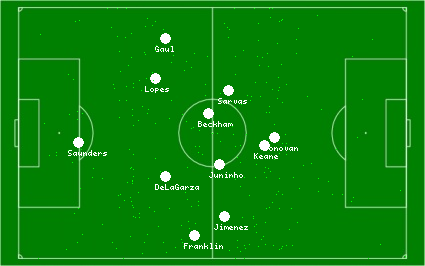 A few things stand out about that formation. The first is that Donovan is playing up top as a forward alongside Keane. The Galaxy have had a hard time finding an effective partner for Robbie Keane, with Edson Buddle disappointing after his return from lower division German football and Chad Barrett being so effective that he was loaned to Norway. Mike Magee's been a decent contributor (and occasionally a decent goalkeeper) and teenager Jose Villareal still seems best situated as a sub, so evidently Arena has decided to fill that gap with one of his best attacking players and worry about replacing the wing instead.

Similarly, Beckham has also moved to the middle. He's probably reached the limit of what his legs can do playing on the wing, so he's tucked into a holding central midfield role where he can wander forward and spray passes into the opposing end.

Those shifts have created openings on the wings for Brazilian Marcelo Sarvas and Superdraft pick Hector Jimenez, who've played well enough so far. Gonzalez didn't play in the Chivas match, but we can expect him tomorrow and a return of the big/small center back pairing with AJ DeLaGarza that so effectively controlled the Sounders in the 2010 playoffs.

At the other end, Seattle doesn't have any significant health problems, but they do have congestion problems. This game isn't necessarily a must win, but it's pretty close to a must not lose. And three days later we have the US Open Cup final, which is obviously a must win. And three days after that the Sounders travel to play league leaders San Jose Earthquakes. A loss there would kill off whatever slim designs Seattle has on the Supporters Shield. Add in the fact that the Galaxy game comes on a day with an expected high of 93 degrees and Wednesday in Kansas City will reach 95 (with thunderstorms!), and Seattle will have to test its depth in this three game week.

So how much of that depth is utilized against Los Angeles? Eddie Johnson and Mauro Rosales were both given the day off in the midweek match against Caledonia, so they seem certain to start. Alonso played only a half and should also be available. Montero is the most likely of the offensive players to sit, in which case that 6 DP moment won't happen. But those others are all critical players for the Open Cup final. In which case it may have to be that San Jose game next Saturday that has to be sacrificed. A reserve team there would have a tough time earning a point, but holding off the Galaxy from a top 3 spot is likely much more important than trying to keep the Earthquakes away from the Shield.

Regardless, the Galaxy match will likely be decided by whether or not Seattle can keep the Galaxy off the scoreboard. Controlling both Keane and Donovan will require a solid game from the defensive line and Alonso in front of them. Juninho's unimpressive play this season and Beckham's pace means that the central midfield should be able to drop back and help out against the forwards, with the stipulation that Beckham can't be allowed time on the ball to cross it in or shoot from outside the box.

If the defense can stay stout, Seattle's likely to have at least a goal in them with a fresh Rosales and Johnson. And a solid debut by Tiffert, even as a substitute, would get his Seattle career off on the right foot and help stretch the roster enough to make three good showings in seven days.