Share All sharing options for: Sporting KC Scouting Report: Into the Cauldron

What most people don't understand is that home field advantage isn't always about where you play. Just as often, it's about what you're playing for. And no matter where the games are played, US Open Cup matches are home matches for the Seattle Sounders, because this is their Cup. It's our Cup. Sounders players have been stomped, cut, mocked, and bruised for it. They've bled for it. And at the end of every match, they were the victors. For four years, every match. In Tukwila, in Portland, in D.C., in San Francisco, wherever. They were all home matches. And at the end Seattle had won and their opponents were left with nothing.

The latest venue for a home match is Kansas City, Kansas. It's fitting that if Seattle's incredible run comes to an end it will be in a final. It means that should the Sounders finally feel defeat in this competition, it will be the very moment Sporting Kansas City lifts the Cup themselves.

Sporting is a strong team. At times, they've looked like the best team in the league — especially during their first seven games of the season, all of which they won. But lately they've looked mortal, especially at home. They haven't had a win in their last four home matches and have only scored one goal in those games. What on paper looks like a high octane roster full of attacking talent plays like a lumbering, angry bear, winning and holding possession with a ferocious midfield to occasionally kick the ball up to the wings and hope for magic. They have one of the lowest goals per game rates among playoff teams, instead relying on their league-lowest goals per game allowed. In a tournament already developing a reputation for rough play, it's a playing style that promises violence on Wednesday night (6 PM GolTV).

Adding to the drama will be Seattle's near-legendary ability to steal points from Kansas City late. Mike Fucito's winner off a throw in, Jeff Parke's header, the Lamar Neagle/Mauro Rosales injury time double strike. . and it almost happened again in their June matchup in Seattle when in the 88th minute Fredy Montero hit a shot under Jimmy Nielsen that hit his glove then both uprights before being cleared away. Nielsen's nightmares wear Rave Green, and even if they have a late lead, Sporting won't be safe.

We'll project starting rosters all around. Even though both teams had a match last weekend and play again on Saturday, this Cup final will be the clear priority. Regardless of priority, defender Aurelien Collin will be out for KC with yellow card accumulation. And Roger Espinoza will be available, but just returned from London playing with the Honduran team.

Here's Sporting's lineup from their last match, an away win over the Revolution: 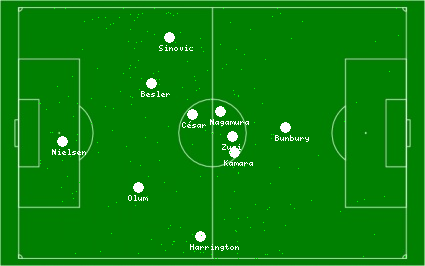 The pinched look of the wingers is actually a result of Kei Kamara and Paulo Nagamura switching sides, not actual narrow play. The defensive look is, however, quite real. Only lone striker Teal Bunbury has an average position beyond the center circle and Kamara has nearly as many actions at left back as he does right wing. It's a map consistent with a team focused on solid defense above all else, content to score on counters via crosses from the wingers.

Getting through that defensive midfield will be a chore, and likely a painful one. A short passing game on the ground will have to be very precise to avoid giving up turnovers and resulting counterattacks. Fortunately, the Sounders have a lot of adept passers, but even so the midfield will be hard to break down. The temptation will be to revert to long balls over the midfield to get the ball into the attack. It may not be a bad idea as both Fredy Montero and Eddie Johnson are strong players adept at taking the ball out of the air, but it may be frustrating for Seattle fans (and players) used to build-up on the ground and possession in the opposing third.

In defense, Seattle just has to replicate their performance against the Galaxy. If they can mark Robbie Keane out of a game, they can mark out Bunbury. If they can largely close off service from David Beckham, they can close off service from Kamara. The major difference is that Sporting relies much more on their fullbacks to come forward and provide crosses. That will place more defensive responsibility on the wingers, which on the right will surely be Mauro Rosales, but on the left is a question mark. Alex Caskey played an excellent game there against LA, but new DP Christian Tiffert has played on the wing in the past and could bring Bundesliga-level play to that position. That would leave central midfield to Brad Evans, who's very comfortable playing there alongside Osvaldo Alonso. Steve Zakuani may also be available to provide a shift, though he may still be seen as a forward rather than a winger for now.

Alonso is, as always, the key. He will be in charge both of shutting down any KC attacks in the middle and starting off any penetration of their midfield. With a spare central defender against the lone Bunbury, the fullbacks will be more free to push forward and the interplay between Adam Johansson and Rosales on the right could be the best route around the middle for Seattle, as it has so often this year.