Share All sharing options for: Learning From Open Cup Failure

Seattle Sounders FC failed to generate many chances in the run of play in their loss to Sporting Kansas City. This wasn't because of poor form, or a lack of confidence. It was because of how Sporting defended.

There were three basic elements to what KC did that are most notable. First, was the high pressure from the three forwards (yes, Graham Zusi was a forward on the night). Second was the multi-defender collapse onto Fredy Montero whenever he got a touch. Third was the deployment of Roger Espinoza as an advanced defender to shut down Mauro Rosales.

That first element didn't have a huge effect. Seattle's starting defenders basically matched the team average for completed passes. While there were a few notable long balls to nothing, it isn't a pattern if you look at the chalkboard. This tactic is more mentally taxing for the defenders, but this didn't change the offensive flow. The second element clearly worked. Montero was not the dynamic offensive player he can be. Again, it wasn't about his form. The number of players that could regularly beat a multi-man defensive collapse that play in MLS is tiny. Montero's probably on the short list of being one of those who can do it with the most frequency, but still the offense needs other passing options.

Seattle's other dynamic passer is Mauro Rosales. Preventing effective service from Rosales to Eddie Johnson limits the attack quite a bit. Shutting Mauro down as a passer at all means no far post headers, no through-balls and no triangles at the right elbow. Shutting him down doesn't just happen through fouls and dirty play. In this case it happened because he was practically marked out of the game by Espinoza (see main image for Espinoza's heat map). 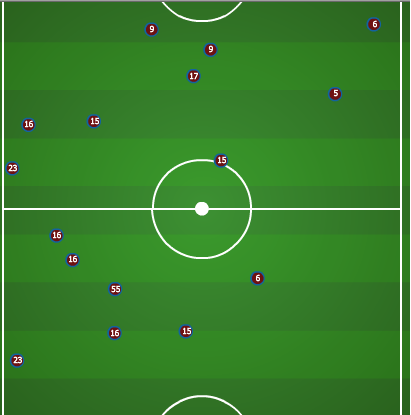 While there may have been uncalled fouls (there always are), you'll note that those that were called were mainly in the Mauro zone. He was stopped that way, but it wasn't just that way. Between the help defense from the right back that bracketed Rosales into poor passing situations, the lack of the stronger right back passing option of Adam Johansson and Fredy Montero getting clearly shutdown Seattle didn't have other options.

Until the second half double sub. For all the things that Rose and Caskey have done well this season, neither are dynamic or creative players. Bringing on Christian Tiffert added a more effective passer (97% completion rate) and adding Brad Evans as a kind of rover that helped in other ways. This is the lesson going forward. The more 4-2-3-1 like shape of the team in the second half provides a future for Seattle.

Evans was primarily, but not exclusively, on the left. Tiffert was clearly in the middle. Those changes meant that when the Sounders tried to bring the ball up through Rosales as he remained shutdown he had two creative outlets at short to middle distances (Tiffert and Montero), a scoring threat above (Johnson) and drop back passes to Scott, Alonso and even Evans at times. This did mean more running for Leo Gonzalez on the left, and is only a temporary solution that couldn't be a regular tactic. Then again how often is a primarily defensive minded midfielder going to be deployed almost solely on the left?

By increasing the dynamism along what is looking to be a more clear band of three now it creates situations where a defensive triangle collapsing on Montero would instead collaps on an Evans, Tiffert or soon Martinez. Then when they swing it over still to the left, or drop back to Tiffert/Alonso to reset, Montero is left on a flank with only one man to beat and only one man on Johnson. Adding just one more creative force and a bit of dynamism Seattle's attack can't be shut down through the two elements that closed them off last night.

It isn't just about shape, but maximizing the skill set of the available players so that a double or triple team on one can be beaten by dropping the ball back to someone who has an great medium to long ball. Seattle now has that. When Rosales is marked out, having a less stringent shape means that the attack can find new angles as well. The second half and the extra 30 minutes didn't show the full potential of these adjustments, but then again these adjustments have only been possible for a week. They may take some practice time to get in order. Maybe a whole week off to prepare for a regional rival?