Share All sharing options for: Sounders Use Unbalanced Shape To Open Passing Lanes

During the last meeting with Chivas USA the Seattle Sounders had trouble defending them within the 18. That problem did not occur Saturday, in fact the defense held the Goats to just six shots and or passes in the penalty area. That defensive improvement held Chivas to just one goal. What may have gone unnoticed is that in the previous match with six goals for the Sounders they had 11 Key Passes plus Assists. On Saturday they had twelve of the same.

If you measure on offenses long term success through chances the Sounders are doing what they are supposed to be doing. But how they are doing it changed. One major change was the presence of Steve Zakuani on the left. Adding that dynamism helps. It isn't just about Zakuani. It is also about the shape and positioning of Montero, Evans and Tiffert. The overall shape was very right heavy (click tactical formation then average position).

Yet, the vast majority of those key passes came from the left (if cut in half) or the left and center (if in thirds). Much of that was done while Zakuani was on the field. He opens a certain amount of space. When Tiffert spends so much time on the right it also drags another opposing body towards that side granting less help for the men on Zakuani. 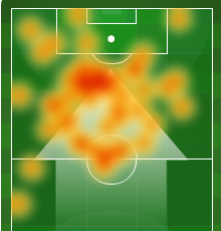 That heat map shows another thing that Seattle did. Montero was mainly active slightly left of center. Tiffert's map is evenly split between spaces that a CM uses and spaces that a RM uses. Brad Evans already kept the left back busy, especially after his success in the last match between the sides. Eddie Johnson's is nearly dead center and further up than Fredy's map.

Again cheating Tiffert to the right drags a central mid that way. Dropping Montero into that hole then pulls a centerback up to him. With Riley then isolated on Zakuani and the other centerback dealing with Johnson there are the diagonal passing lanes open for Seattle to pick apart the Goats and create a significant amount of chances. 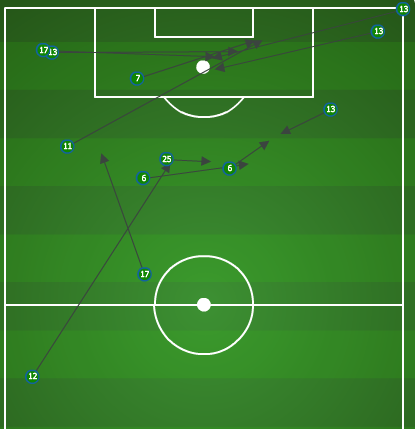 In a match without Mauro Rosales Sigi Schmid used the threats of Brad Evans and Christian Tiffert to create a similar amount of unbalanced defense. The Sounders didn't get six goals on Saturday night, but they created enough chances. The attack was as strong as ever and showing MLS that it is getting stronger.

What they did was beyond the label of a 4-4-2, it was tactical, not strategic. Small moves across the pitch created space for the return of Zakuani and the bold play of Montero. Eddie Johnson then finished those moves. As he said post game, "Fortunately I’m on a team where we have good guys that are getting out wide and putting some great balls into the box. I think that’s one of my strengths and guys are starting to realize that."

When Johnson's scoring like this having both forwards in a band or midfielders operating centrally limit the opportunities to feed him the ball. Instead Fredy's routine of dropping back and systematic movement of emptying the middle for an overloaded flank it leaves Eddie Johnson open in the middle. That's goal arithmetic.