I won't belabor the off-field implications of this game against the Portland Timbers. You'll get enough of that from this site, other blogs, social media, NBC, and other national outlets. Heck, if you're within a day's drive of Portland you'll feel it in the air, like a storm yet to break over the horizon. Suffice it to say that if you're a neutral supporter of MLS, this will be one of the showpiece games of the season.

And if you're a Timbers fan, this is your season. The playoffs are far out of reach. The Open Cup campaign is a distant memory (or a recurring nightmare, featuring Eric Wynalda's smiling face and probably some clowns and vampires and other scary stuff). The only chance at hardware is the Cascadia Cup, one of the few rivalry cups in the US that's worth more than the metal melted down to make it. And so with the Caleb Porter era looming in the offseason, the only chance to transition out of this era with some dignity is to wrest the Cup from the Seattle Sounders, and incidentally win it for the first time in a season that the Sounders competed for it.

For Seattle, a lot more is going on. A win would not only keep the Cascadia Cup at home for at least one more match, it would keep open the slim chance of overtaking the Earthquakes for the Supporters Shield and cement the Sounders in a top 3 spot and a first round bye. And it would maintain momentum into a critical CCL match with Marathon that could decide the group.

So back to the on-the-field factors. This isn't John Spencer's Houston-lite 4-4-2 anymore. Troy Perkins is gone. Jorge Perlaza is gone. Kris Boyd is now the league's most expensive bench player. Instead they're moving to the 4-3-3 and doubling down on Darlington Nagbe.

Here's the average position map from their last home match, a 1-0 win over Colorado (I'll mercifully ignore the following 0-3 loss in Colorado): 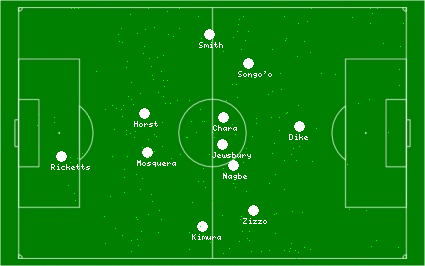 That's a nice, clean, easily identifiable formation. It's the kind of positional rigidity you'd expect with a well-coached team that's learning a new way to play. Bright Dike plays up top as a pivot for the attack, with a winger on either side who can cross or cut in, or drop back to create a 5 man midfield in defense. Nagbe doesn't play in the forward band but is the frequent focus of the attack as he moves forward as an attacking midfielder, leaving Jack Jewsbury and Diego Chara to hold the central midfield.

That creates effectively a 4 man attacking group, but it's a group that comes into the box from multiple angles, requiring more communication and team defense than you'd need against a more static pair of forwards. One of Seattle's central defenders will be around Dike at all times, leaving the other to coordinate with Alonso on picking up midfielders and with the fullbacks on picking up the wings.

What Portland gives up in that thinner attack is a thicker midfield that can cut off Seattle's progress toward their defense. Against Chivas Seattle showed that they can struggle against a midfield committed to packing it in and closing down passing lanes. The Sounders had a hard time generating offense in that game, frequently passing it around the defensive third for 7 or 8 touches and relying on long balls from Leo Gonzalez to get the ball into the attack. But that was without Adam Johansson and Mauro Rosales, both of home are expected to be back for the Portland match.

And when Seattle does penetrate that midfield, things start to get interesting, because the Portland back 4 is one of the weakest in the league. I don't know what happened to Kosuke Kimura, but a player who looked decent enough in Colorado has been pretty close to a disaster in Portland. He's a glaring defensive hole at right back that seems to be good for 4 or 5 major mistakes a game. He was as responsible as anyone for all three of the Rapids goals in Colorado.

We don't actually know who'll be playing left wing for Seattle, as it's by far the position with the most parity for Seattle. I wouldn't be surprised by any of Steve Zakuani, Alex Caskey, Mario Martinez, or Brad Evans. Whoever it is should be able to generate chances on that side and things get even worse for Portland if Fredy Montero drifts to that wing, as he did for the game winning assist against Chivas.

In the center, Mosquera and Horst are fine, but they'll have their hands full with Eddie Johnson and Montero, who are two of the hottest attackers in the league and will be getting regular service from the pair of Rosales and Johansson on the right.

This is a game that might come down to the offensive substitutes and a late goal. For Portland that means 1.5 million dollar supersub Kris Boyd, who scored on Seattle in the first iteration of this game this season. And it means Mike Fucito if he's recovered from a hip injury. Fucito scoring on his old team would be a bit of storybook lore that Timbers fans would relish. For Seattle it could mean Mario Martinez or Steve Zakuani, both of whom have enormous offensive quality that could be decisive against a tired defense.

A fair neutral would have to agree that Seattle will be putting substantially more talent on the field and recent results will put momentum in their favor as well. But it can't be overstated that this game is arguably the Timbers' entire remaining season. If the Cascadia Cup is decided here, everything after is tweaking the formation and tactics to prepare for next season. The team will be as motivated as they can get and the crowd will be a physical force. I think it adds up to Seattle being slight underdogs, but if they can stay organized enough to put out the fires, if Gspurning can make the occasional big save, and if the attack can stay patient and keep applying pressure, a win and the continuation of another decade of dominance is there for the taking.