Share All sharing options for: FC Dallas Scouting Report : From the Ashes

The Sounders put a big dent in Chivas USA's playoff chances last week and have a chance to finish them off with a knockout punch next week. Sandwiched between is the first of a one-two punch against the other team vying for the playoff spot the Vancouver Whitecaps seem so desperate to vacate.

FC Dallas won three matches in the first four months of their season — from March to the middle of July. Earlier this month they won three matches in a week. That's the difference that David Ferreira makes in their midfield. A single player making that much difference to a team might be hard to believe, for anyone who wasn't a Sounders fan and considered what would happen if Osvaldo Alonso were absent for a year.

It's probably no coincidence that both keystone players are central midfielders. Alonso is the glue that holds Seattle's defense together, but Ferreira is his mirror image. He's the glue that makes Dallas' offense work. In those four Ferreira-less months, the Hoops scored 2 or more goals three times. They've scored at least twice 5 times in the month and a half he's been back.

Unfortunately for Schellas Hyndman and his players, it's probably too late. Even their scorching pace coinciding with the ongoing collapse of the Whitecaps leaves a difficult road to a playoff spot for Dallas, who have to play Seattle twice more and San Jose again in a treacherous close to the season. On the plus side, they face Vancouver head-to-head once and Chivas USA twice, so they'll have plenty of 6-pointers to contest. But to have a real shot they have to beat the teams at the top, too. They failed against Los Angeles last week and will have to try again to prove they can do it tonight against the Sounders.

Here's the average position map from their loss to the Galaxy. The lineup against Seattle should be largely similar, though they will likely have Blas Perez in at the start and Fabian Castillo out with a hamstring injury. 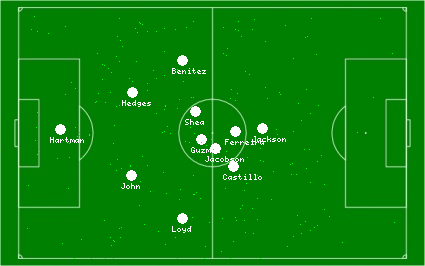 The narrowness in the offensive half is mostly a result of wing switching. Brek Shea had quite a few events on the right wing in the first half, so he averages a central position. But make no mistake, Dallas is a team that can attack the wings. Shea tends to stay out wide before cutting in for a shot and Castillo burns up the right sideline with his pace.

Julian de Guzman was a nice midseason pickup for FC Dallas after a seemingly endless career of disappointment as a Designated Player for Toronto FC. He's now doing a decent job of holding down the central midfield and is threatening to move Dallas talisman (and all-around nice guy) Daniel Hernandez to the bench.

Despite playing a midweek game in CCL play, Seattle's lineup won't be dictated by injuries or fitness. The team is as healthy as it's been all season, with only reserve Andy Rose a recent addition to the injured list and Steve Zakuani and David Estrada both recovering from long term injuries. And even though there's a short turnaround for this match, the schedule further ahead is as light as we've seen all season. After working through the grinder of two games a week for months, Seattle is a on a steady diet of one game a week for the next few weeks, until we see CCL play again against Marathon.

So the usual starters should be starting, with the caveat that there is no usual left wing starter. Brad Evans has staked a strong claim for it after being bumped out of central midfield by DP Christian Tiffert. His crosses with his left foot haven't been stellar, but he's been able to contribute to the attack when he cuts in, including an assist against Chivas. Mario Martinez is also a contender but is less available after playing a lot of minutes on Thursday and heading off to join Honduras for a World Cup qualifier in Cuba on the 7th. Steve Zakuani's availability continues to be a question mark (as is the question of whether he'll play at wing or forward). And there's Alex Caskey as well.

As familiarity continues to develop between Fredy Montero, Tiffert, Mauro Rosales, and Eddie Johnson, they will get even more dangerous, which should terrify the rest of the league. But against Dallas the Seattle fullbacks may be the most important players. Alonso will be tasked with keeping Ferreira from having too much time on the ball, which will drive the Dallas attack to the wings, from where they're quite comfortable attacking anyway. Zach Scott has made a bit of a name for himself keeping Brek Shea in his pocket, but he's a significant offensive liability compared to Adam Johansson. Assuming the Swede plays, he'll have to put in heavy work against Brek Shea. And even without Castillo, the right wing will have to be covered carefully by Leo Gonzalez (or Marc Burch). If all of that works out, the only danger left is the individual ability of Perez to create chances, but if he's isolated from Ferreira the Seattle center backs should be able to manage him.

And that will give Seattle's Four Horsemen of the Apocalypse the freedom to run over de Guzman, George John, and rookie center back Matt Hedges just as they tore up the Chivas USA back line. Montero and Johnson are scoring for fun, and if Dallas wants a win here to springboard them back into playoff contention, they might need 3 goals to do it — a feat that Alonso, Michael Gspurning, and company will make tremendously difficult.