It took me a long time to take the 2012 San Jose Earthquakes seriously, and I'm sure I'm not alone. Despite playing with essentially the same roster that finished 14th out of 18 teams in 2011, they grabbed on to first place in the first weeks of 2012 and haven't slowed down since.

One of the reasons I was dubious about the Quakes' staying power was the fact that none of their important players had been injured for any significant length of time, and that remains true. You need only ask Real Salt Lake or FC Dallas how easy it is to drop from an elite club to a mediocre or worse club with the loss of a critical player. And it isn't hard to imagine what would likely happen to San Jose if (knock on wood) Chris Wondolowski were out for any length of time. But thus far they've avoided that disaster.

But again, a lack of injuries can't turn a bad team into a nearly unbeatable one. So there's the luck factor as well. San Jose's penchant for injury time goals this season has gone beyond the impressive into the ridiculous. They've scored a final game winning or tying goal after the 84th minute 10 times this season, and 8 times it was in injury time. That's a vast amount of points that came from goals at the death, and while there's a lot of skill and confidence behind that, there's also a lot of luck.

Still, we have decent ways to measure luck, like measuring non-goal stats like net shots and offensive pass percentage, and they all point to San Jose being a very good team. The crunchy power rankings have them as statistically the second best team in the league (behind Sporting Kansas City).

Another explanation is that San Jose seems to have doubled down on Chris Wondolowski. As I talked about in a previous scouting report, Wondolowski is a special sort of goal-scorer. He's not particularly fast or technical or tireless or accurate. But he has a magical ability to find open spaces and use them to take open shots, which don't require any particular speed or skill or endurance. And if you have a player that thrives on open spaces, the best thing you can do is give him open space with a massive marauding pest like Steven Lenhart who demands the attention of defenders both tactically and psychologically.

So somehow this alchemical mix of good health, good luck, the addition of Simon Dawkins, and an even wider open Wondolowski has turned a fairly bad team into overwhelming favorites for this season's Supporters' Shield

Here's the average position map from the first half of San Jose's match against Portland: 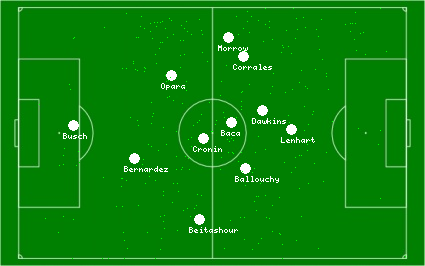 Wondo didn't start the match, but he came on as a sub to score the two goals that tied the game, including one in injury time — natch. There's no reason not to expect him to start in Seattle, which would likely push Dawkins to left wing and Corrales to the bench. Otherwise the lineup should be similar and there's not much complexity to it. Sam Cronin plays holding mid with Rafael Baca slightly ahead. Steven Beitashour and Justin Morrow are aggressive fullbacks, which allows the wingers to cut in centrally. In combination with the target forward — Lenhart or Alan Gordon — they overload the defensive middle and force attention away from Wondolowski, who drifts into space for crosses from the fullbacks. It's a recipe that's led to 60 Earthquakes goals this season, already more goals than any team has scored since 2000.

Seattle has not had San Jose's fortune when it comes to injury. Mauro Rosales and Christian Tiffert are both nursing injuries that have kept them out recently. From Friday's reports it sounds like Tiffert is more likely to go than Rosales. It's important that at least one of them be on the field as they are Seattle's two most important providers. Without both the Sounders' offense easily becomes unimaginative and starts relying on punted balls to penetrate the opposing midfield.

With Tiffert and Osvaldo Alonso together, Seattle will have the defensive presence to help control the midfield, even with Dawkins and Beitashour cutting in from the wings. That will let the Seattle defenders focus on Lenhart without losing track of Wondolowski. At the other end the wingers need to provide enough consistent pressure to keep the San Jose fullbacks pinned back in their end. Rosales is ideal for that, but without him Brad Evans is a fine attacking threat. On the left side Steve Zakuani is rounding back into form, or we could see Alex Caskey.

With Eddie Johnson on yellow card suspension, the forward tandem will be Fredy Montero and Sammy Ochoa. Montero is a consistent MVP worthy attacker and Ochoa is on scorching form in non-league play. There's no reason not to expect that form to translate into the regular season, so Seattle should have plenty of attacking threat from its forwards as well.

The last time these teams played in Seattle, the Sounders were shut out, but I wouldn't bet on that happening again. And the league leaders in goals are themselves rarely shut out. For the two teams that are tied for the fewest losses this season, a draw would be somehow fitting, but it would increase the pressure on Seattle to stave off Los Angeles and Salt Lake to hold onto a top 3 spot in the West. Still, without Rosales and up against the league leaders it'd be hard to demand more.