Seattle plays their fourth and final road match of the 2012 Cascadia Cup campaign. They have the talent to make this their first Cascadia win on the road and set up a dramatic Cascadia Cup finale next weekend in Seattle.

As long as MLS sticks to the current schedule format — which involves each team playing each other team in its conference three times in the regular season — no Cascadia Cup competition will be as difficult as this one, at least in its scheduling. The Seattle Sounders have two of three on the road against both Portland and Vancouver. I'm sure that's just coincidence, but in a season that's provided plenty of fodder for Sounders fans to feel aggrieved — like say secret bid evaluation and coinflips for USOC hosting rights, an extremely dubious refereeing decision to help lose that Cup, and four penalty kicks surrendered in three CCL matches — it's just one more piece of evidence that it's not going to be an easy season on any front. But Seattle overcame most of those obstacles (the called back penalty in the Cup final certainly wasn't overcome) and they're on pace to overcome the difficult Cascadia scheduling.

Seattle only lost one of the three road matches played so far, drawing in the other two. Combined with their home win over Vancouver, that puts them in position to pull even for the lead with another win over the Whitecaps this weekend. Another draw wouldn't be ideal, since it'd give the Timbers a chance to clinch the Cup with a win over Vancouver, but barring that Portland win it'd still put Seattle in position to claim the Cup in the competition's final match next weekend. While it's dangerous to assume anything about the chimerical MLS scheduling process, it would make sense for the home/road breakdowns to be reversed next season. So if Seattle can hold out for this Cup, the odds of winning three in a row (including every Cup contested at the MLS level) would seem very good.

Helping Seattle's effort is the fact that Vancouver seems to be sinking below the waves on their old crests. After storming out in the Spring and looking to make good on Simon Borg's reliably perverse prediction of a Whitecaps MLS Cup, the team went through a major overhaul in midseason, started getting a lot less lucky in defense and scoring, and hasn't recovered. The only thing that's still keeping them in the playoff race is that every team below them in the West is absolutely awful, except for the rejuvenated FC Dallas who still may pass up Vancouver for 5th place.

Before their most recent home draw against Columbus, which given their recent form was quite an accomplishment, they had lost 5 matches in a row, scoring only a single goal in those 5. Since mid-July, when they shipped out Davide Chiumiento, Sebastien Le Toux, and Eric Hassli, they haven't scored more than 2 goals in a game and have achieved that only three times. At the other end, they haven't shut out an opponent since a July 7 scoreless draw against Chivas.

Here's their average position map from that home draw with Colorado: 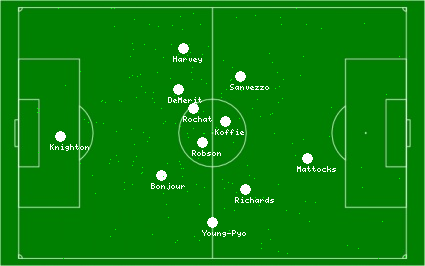 The lines between a 4-3-3, a 4-2-3-1, and a 4-5-1 tend to be blurry. In all three you have a lone target forward and a pack of 5 midfielders behind. If the outside midfielders tend to stay high as wingers, that'll look more like a 4-3-3. If they stay back, it'll look like a 4-5-1, or a 4-2-3-1 if two of the central midfielders drop back. I'd call Vancouver's lineup here a pretty clear 4-2-3-1, with Dane Richards and Camilo much further back than the isolated Darren Mattocks and both Alain Rochat and Barry Robson withdrawn into holding midfielder roles. That's a pretty defensive look, especially in a home game, and it probably isn't coincidence that Vancouver didn't score in the Colorado match until the second half, after Kenny Miller substituted on for Martin Bonjour.

If Miller starts against Seattle, it may look more like a 4-4-2, but it won't be clear how he'll interact with Mattocks. The rookie leads the team in scoring, but has only scored one goal since Miller joined the team along with Robson and Dane Richards to replace Le Toux, Hassli, and Chiumiento.

For Seattle, the game heralds the return of Eddie Johnson from yellow card suspension and likely Mauro Rosales from injury. Last week against San Jose the Sounders demonstrated that they have difficulty creating offensive chances without Rosales on the field, even with new playmaker Christian Tiffert in the middle. And Johnson leads the team in regular season goals in a revelatory season. Their additions should substantially improve the Seattle attack, as should the downgrade from San Jose's stifling defensive pressure to Vancouver's rather more porous defense.

Add the reliable presence of Fredy Montero (with Johnson to create space for him once again), the return of the hard working David Estrada from injury, the continued improvement of Steve Zakuani through his long recovery, and the improving integration of Mario Martinez into the side and there's no reason not to expect Seattle to pepper Brad Knighton's goal with chances, and a shutout seems very unlikely.

At the other end, Osvaldo Alonso should be ready to go, which is always bad news for the opposing attack. The more likely danger will come from the wings, where the speedy Richards and Camilo cut in from the wings. Leo Gonzalez doesn't have the pace to recover if Richards gets by him, so expect him to stay at home, leaving the fullback forays to Adam Johansson on the other side.

Vancouver's early season results have put them in the table position of a borderline Western Conference playoff team, but with only three wins in the second half of the season they're really playing like a bottom of the table team closer to the Timbers or Chivas. In the last scouting report I wrote that there's really no reason for Seattle not to dominate Vancouver at home, and the Sounders won 2-0. Being on the road makes it a little tougher, but there's still no reason for Seattle not to outplay and outshoot the Whitecaps, and they have a very good chance of catching up to Portland in the Cascadia Cup chase, setting the stage for a dramatic finale next weekend.

Sounders at Vancouver Whitecaps Cascadia Cup - From Beginning To End