Share All sharing options for: Sunday Night's 4-3-3 Was Different But Not A Lot Different

The depth of the Sounder's 2012 roster allows Sigi Schmid tactical flexibility. Last night in Frisco, Texas, we got a taste of just how much flexibility. Normally the Sounders play a modified 4-4-2 formation that is affectionately known as Sigi's Arrow. Last night the team lined up in a modified 4-3-3 and by the end of the game was actually playing a formation closer to a 4-5-1 as fatigue set in.

Last night wasn't the first time that Seattle has employed a 4-3-3, but for many of us it is still novel. Like many Seattle fans, I began to follow the modern game when Seattle joined MLS. Last night I found myself constantly looking in the wrong place as I watched the game. I've learned to follow the movement of the ball and the flow of the game in the context of Seattle's standard formation. I expected players to move in one direction, but the change in formation changed their responsibility and consequently their movement on the pitch. By the end of the game, I was beginning to understand more of the movement. After the jump I'm going to take a more detailed look at how the change in formation changed the movement and responsibilities of the players. 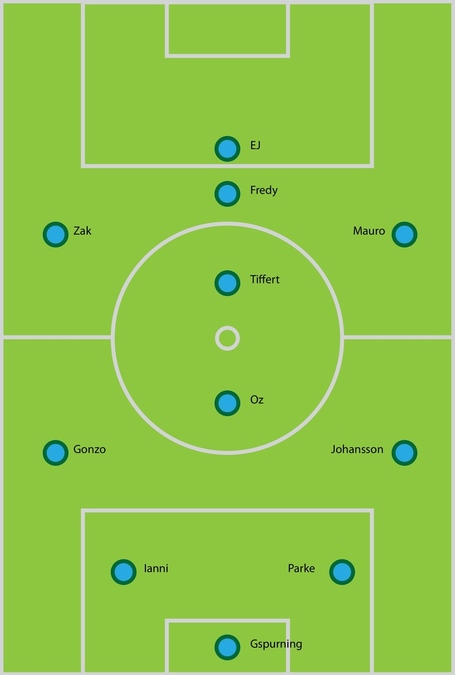 Notice the vertical stack of players up the center of the pitch. Alonso, Tiffert, Fredy and EJ are all free to move vertically or horizontally to exploit the team they are playing against. Pressure up the wings is provided by the Wide MFs and the Outside Backs. Occasionally the Wide MFs will swap positions or pinch in. But they are mostly responsible for pressuring the flanks and providing service. With this formation we see the Wings and Outside Backs make overlapping runs and the Attacking CM provides an outlet, late runs and now, with Christian Tiffert, service. This is the formation we are accustomed to watching. It is our default expectation and when new players enter the line up, we expect them to fill one of these spaces in some capacity.

Now here's a map of the 4-3-3 the Sounders employed last night. 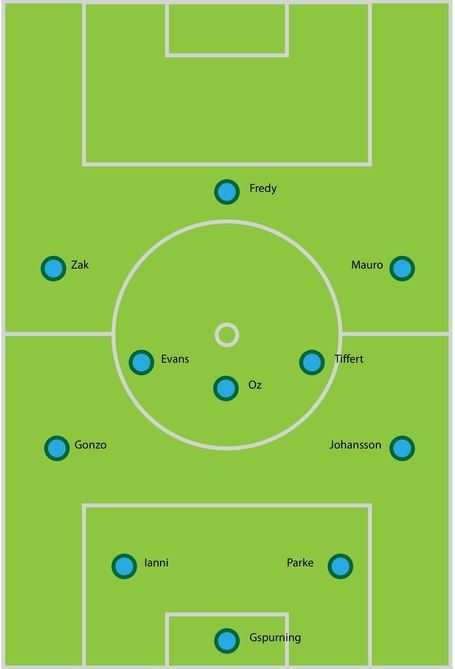 The basic defensive posture of the back four is unchanged. The difference lies in the attacking end of the pitch. The midfield is more congested and five players form an arc behind a single forward. Both teams played a variation of this formation yesterday. Seattle adopted a defensive posture using the formation and FC Dallas took the role of aggressor. Movement and responsibility differ when a team employs this formation. This is particularly true of the wings and the outside backs. Let's look at the isolated case of Steve Zakuani. 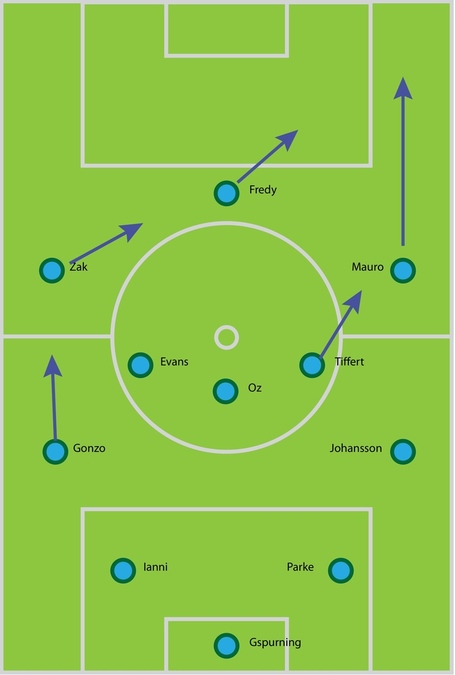 When the ball is on his side of the pitch, Zak is tasked with the role of a traditional winger pressuring the left corner. But when the ball is in the opposite corner he has a very different responsibility. He must pinch in to provide a backside outlet for the attack. The key is Fredy's position. When Fredy Montero moves left, Zak is unleashed as an attacking wing. When Fredy moves right, Zak must pinch in and provide an outlet. This is the adjustment Sigi was talking about just before half. Zak wasn't pinching in during the first half and it was isolating Fredy too much.
FC Dallas has built it's roster to exploit this formation. Their CBs are traditional pillars. Seattle uses much smaller dynamic CBs. The FCD Outside Backs bomb into the attack. Look at the Opta heat maps from the MLS website. 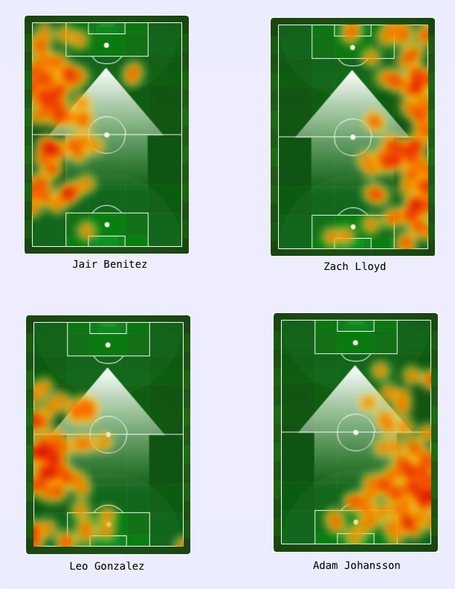 Seattle relies on its Outside Backs to help cover the CBs. FCD expects its Outside Backs to support the attack. Notice how much farther forward the FCD backs are and how much more time the Seattle backs shade toward the center of the pitch on defense. This isolates the FCD CBs but they are used to it and without Seattle's normal fluid attack, they were able to double team their coverage of Fredy Montero.

Now look at the difference between two teams at Forward and Attacking CM. 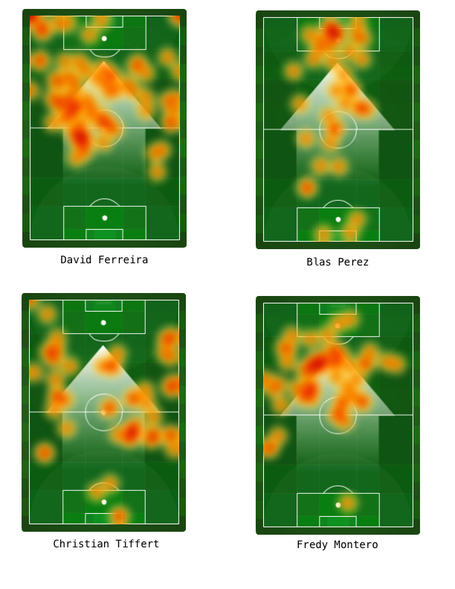 FCD is built around the combination of David Ferreira and Blas Perez. Perez is a burly Forward who holds up the ball and plays with his back to goal. Ferreira is a #10. A true CAM. He both orchestrates the offense and shoots. By contrast Fredy is a Withdrawn Forward and ChristianTiffert is a Regista. Both were asked to play different roles last night. Considering Fredy's substantial size disadvantage to the two FCD CBs, he did an amazing job. He was dangerous throughout the game and did exactly what Sigi asked him to do. Pay particular attention to how closely Fredy's heat map mirrors that of David Ferreira. Yet, Fredy was playing the same role last night as Blas Perez. Even in this role, Fredy needs to be more centrally located on the pitch in order to be effective. He needs the room to turn spin off of the defenders and release into space. (This is also a great example of why playing a WF and a CAM on the pitch at the same time is tough. They need the same space. By contrast look at how neatly Tiffert's movement envelopes the space occupied by Fredy.)

Last night was in many ways a tactical experiment to help the team combat an unique set of circumstances. The team was exhausted from heat and ridiculous travel distances. Eddie Johnson was not available. FC Dallas floods the midfield and bombs the wings. They have been on a strong run of form since the return of George John and David Ferreira. And they just got Blas Perez back. The only pieces they were missing were Ugo Ihemelu and Fabian Castillo. Running a 4-3-3 allowed Sigi to clog the center of the pitch and cut down on the effectiveness of the FCD attack. It wasn't always pretty. But it was a great example of how a balanced team can play different formations to exploit the necessities of the moment. Even though the Sounders were not constructed specifically to leverage a 4-3-3, they are able to play it professionally when needed.

At the end of the day, the highlights of the night were winning a road point and the return of Steve Zakuani to the starting lineup. Dallas needed three points much more than Seattle did. The tie makes it much harder for FC Dallas to claw its way back into the playoff picture. A fully functional Dallas team would be a difficult playoff adversary. Helping to knock them out of the picture is a good thing. But the night was also a testament to the resilience, character, depth and maturity of the 2012 Sounders. As good as Fredy was in 2009, he could not have done what he did yesterday. The team was able to adapt and perform. And in the process, we had a chance to learn a little more about how soccer can be played.