Just two weeks ago the scouting report on Chivas was that they were a miserly team that didn't score much but didn't allow many goals either. So naturally their following game versus the Seattle Sounders featured 8 goals, including Fredy Montero's first hat trick and some pretty unimpressive defending from Seattle that meant a 10 goal game wouldn't have been unthinkable. Chivas continued their sudden massive transformation to an up and down team with a porous defense and they've now conceded at least 3 goals in their last 3 games.

If the intent was to create a more lively brand of soccer, it's come at the expense of results. Despite a sputtering offense, they kept up an outside shot of making the playoffs through most of the season. But they're now winless in their last five, a slide punctuated by changes in the back office, where Chivas de Guadalajara owner Jorge Vergara has taken over full control of the club and is reportedly set to overhaul the team's operations.

One of the oddities of their transformation into an end to end team is that it coincides with their trade for Shalrie Joseph, one of the best defensive midfielders in league history. But Joseph hasn't looked particularly good thus far in red and white, no doubt in part due to the need to build an understanding with his new teammates. Joseph might be a long term upgrade over Nick LaBrocca or Oswaldo Minda in that position, but in the short term the Chivas back has become a sieve.

Here's the average position map from the first half of the match against Seattle in Carson: 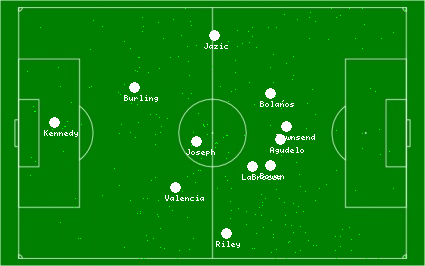 That's a much more aggressive look than in either of the other two average position maps we've published for Chivas this year. Both fullbacks are pushed up into the attack and the entire non-Joseph midfield is pushed up where you'd generally find attacking mids. Townsend, Agudelo, and Bowen are all forwards by nature, regardless of where you put them on the team sheet, Miller Bolaños is an aggressive midfielder who likes to bomb into the attack, and LaBrocca also tends to drift into attack and certainly did in this game. So that's 5 attacking players plus aggressive fullbacks and it's no wonder the remaining defense was overwhelmed. And no wonder why Seattle's goal was under siege as well.

But that's a fight that Seattle will win every time. If Robin Fraser wants to roll the dice again and send in 5 attackers, he'll do it knowing that Seattle's attacking legion of Montero, Eddie Johnson, Mauro Rosales Christian Tiffert, and Brad Evans (or whoever else is deployed at left wing) is just better than his. They proved that in Los Angeles, and at home their advantage would be even greater.

The less suicidal move would be to rein in the cavalry and try to stabilize the midfield again with Minda alonside Joseph and LaBrocca pulled back to leave the attack to Agudelo, Bowen, and Townsend (and maybe some time for Angel). That's an attacking combination that Seattle can certainly deal with and it'd be hard to imagine Chivas scoring more than a goal or two (if they're lucky). And even with the midfield more packed, Seattle's Brougham Bombers are well rested after that grueling match on the surface of the sun in Dallas.

Johnson didn't even make the trip that included Dallas and the CCL match against Caledonia, so he'll be eager to continue his run up the MLS scoring table. The only significant injury concern is Osvaldo Alonso, who gashed his head during the Dallas match and needed stitches. And honestly if there's any question about his fitness, this is a good game to sit out. Chivas isn't completely toothless, but Seattle's playoff situation seems pretty secure in the top three and the Supporters Shield is nearly out of reach. We're not exactly playing for the world in this one. This game is about keeping momentum, keeping the home fans happy, and keeping the development of chemistry and confidence that will set the stage for a good playoff run. The same goes for Mauro Rosales, who's apparently nursing a slight quad issue. Seattle is suddenly deep at midfield even with international absences, so there's no reason to push it if there's any question.

Speaking of those international absences, Mario Martinez is off playing for Honduras in World Cup qualification (beating Cuba today). And Adam Johansson is playing for Sweden in a friendly against China and World Cup qualifying against Kazakhstan on the 11th. The former is not a significant loss given that midfield depth, but right back is much thinner, as we saw when the team struggled without the Swede during the middle of the season.

It's a sign of Brad Evans' versatility that he might be the best choice for replacing Martinez at left wing, Rosales at right wing, and Johansson at right back. But given that there's sadly only one Evans, we're more likely to see Zach Scott at fullback, where he does a fine job as a defensive stopper. After Zakuani's first start since his injury he's also somewhere on the depth chart for left wing, though he's clearly not fully match fit yet. Still, with Martinez and possibly Rosales out it's a good opportunity to give him 60 minutes or so.

This is absolutely a match Seattle should win. Chivas is a broken side that can't figure out how or when it wants to play, the Sounders remain one of the best teams in the league and are nearly at their peak of talent, and it'll be an afternoon home match in glorious weather. Soccer is a funny game and nothing can be taken for granted, but with nothing else going on until next week's match in Portland I don't see Seattle losing focus here. We'll say hello to James Riley on his return to CenturyLink and Chivas will say goodbye to whatever playoff hopes they have left.