After trading Jeff Parke, loaning Fredy Montero and making several other moves, the Sounders appear to have three open senior roster spots and are within spitting distance of the salary cap.

The picture might not be quite as rosy as we'd all like to think after the Seattle Sounders lost their best defender and one of their best scorers, but it sure looks a lot better than it did the last time we looked. Based on a fair amount of educated guesswork and using last year's roster-rules as base, it would appear the Sounders are now about $170,000 over the 2013 salary cap of $2.95 million.

While that might not be exactly what we all would like to hear, there is some good news. The first is that the Sounders have probably scraped together enough allocation money to get under the salary cap and have enough room to sign a few more cost-efficient players. The Sounders should also have three senior roster spots, even after the acquisition of Lamar Neagle on Sunday.

At the very least, I'd suggest the Sounders can afford to sign any of the trialists currently in training camp or could probably figure out how to squeeze a Youth Designated Player onto the roster.

What changed since last time? Let's go through the list:

This being MLS, the exact amount of allocation the Sounders received in the trade will never be known for sure. What we do know is that MLS teams can't trade less than $75,000 in allocation. Parke, who is currently with the United States national team, was surely traded for more than the minimum. I'm estimating it's between $100,000-$150,000. Parke was due to make about $200,000 assuming a 5 percent bump on last year's salary. Combined, the Sounders netted an estimated $325,000 or so in cap space in the deal.

As luck would have it, both Hurtado and Ianni were out of contract. With Parke gone, re-signing them was a no-brainer. We can safely assume both got more than the standard 5 percent raise. Hurtado was already making decent money, but probably got about a 10 percent bump. That would put him right around $200,000. Ianni probably received closer to a 15 percent bump, which would put him around $130,000. Combined, that probably eats up $80,000 over last year's numbers.

Say what you will about the talent hole Montero leaves, but it cleared a good chunk of change off the salary cap. Montero would have hit the salary cap at $367,000 and taken up a DP spot. Obviously, those are only as good as what the Sounders do with them, but it makes whatever happens this offseason possible. Unfortunately, it doesn't look like there was any allocation money to be had in this deal.

Sounders move up to No. 10 in SuperDraft

The Sounders gave up allocation to Toronto FC to move up from No. 16 in the SuperDraft to pick Eriq Zavaleta at No. 10. We don't know exactly how much they gave up, but we can assume it wasn't a lot as it was made just moments before the pick was due to be made. Knowing that a team can't trade less than $75,000, let's assume that's what they gave up. We don't know Zavaleta's salary yet, but we know he's off the senior roster and doesn't count against the salary cap because he's Generation Adidas.

Other bits and pieces

Here's how I had the numbers: 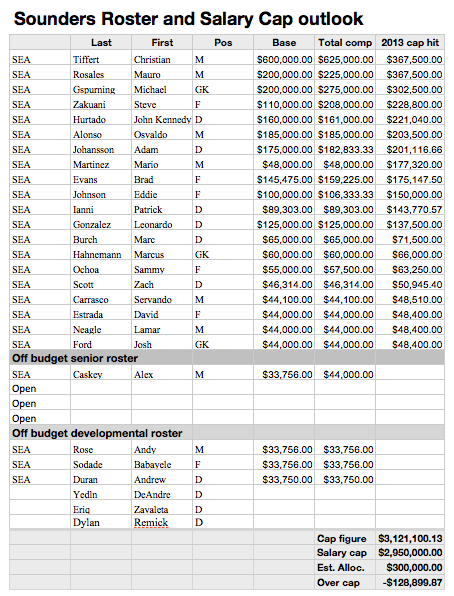 What options do the Sounders have?

The Sounders don't have to fill all their roster spots and actually stand to pick up an additional $35,000 in allocation money for each opening. That would allow them to sign one or more players. If those players sign for the league minimum or below, they'd essentially be added to the roster at no cap-hit. With three unfilled international roster spots, the Sounders have very little limitations in that regard.

They could also choose to sign as many as four additional players. Assuming I understand all of this right, they could sign one of them for as much as $175,000. That's the league minimum plus the estimated $130,000 of cap space they have (assuming they have the $300,000 of allocation I think they do). That figure also puts them well in range of being able to fit a Youth DP on the roster, which would hit the cap as low as $150,000 (if the player is 20 or younger).

The Sounders could also elect to keep one of those roster spots open, take the $35,000 in allocation and should have enough room to sign a senior DP at midseason. If they wait until June to bring in a DP, it would only cost them $183,500.

Of course, there are more drastic options available as well. There are any number of players the Sounders could choose to cut or trade that would free up even more space. Could the Sounders do more with Christian Tiffert's DP spot than they are getting? Is Adam Johansson capable of living up to his hefty cap number? Might Servando Carrasco or Sammy Ochoa be capable of bringing in allocation money via trade? Is Brad Evans as important with more dynamic options available on the wing and cheaper options available in the middle? Might someone else be interested in developing Martinez, who figures to miss a significant chunk of time while on international duty? Would a formation change make Marc Burch an unnecessary luxury?

Not the best options, to be sure, but at least the light at the end of the tunnel is visible.