In last night's draw against Canada Evans was seen as the worst player, or one of the worst, by most of those that do player ratings. And yet, his stats were great - not good, great.

Judging performances in soccer is a complex thing. Many fans look for different things than coaches do. There is no Sounder who that is most true for than Brad Evans. He is routinely praised by Sigi Schmid. He has earned fringe national team consideration. Last night he started for the United States in a 0-0 draw against Canada.

Those that do player ratings found him lacking. He was the worst, or one of the worst, Americans on the pitch. The Opta data had him as the most active player on the field.

Steve Davis at ProSoccerTalk made Brad's limitations the theme of his first review of the match. The focus was on putting Evans at the top of the diamond.

What an interesting choice by Klinsmann to put Brad Evans in the chief playmaking position, at the top of a midfield diamond. The versatile Seattle Sounders’ midfielder may be a lot of things, but he’s not the guy to punch holes in tightly packed Canadian defensive stack-up.

Brian Straus at AOL.SportingNews had his deployment in the middle as a footnote. His time at right back goes unmentioned.

Josh Deaver at American Soccer Now mentions both of Evans' roles, neither in a positive light. Liviu Bird's tactical report on the game is not up yet, but will mention Evans not making decisive enough runs at right back. We'll link that when it goes up. It is up and a must read.

Brad Evans struggled badly in a central midfield role and was only marginally better when he moved to the right side after the break.

Yet, look at Brad's time in the midfield. 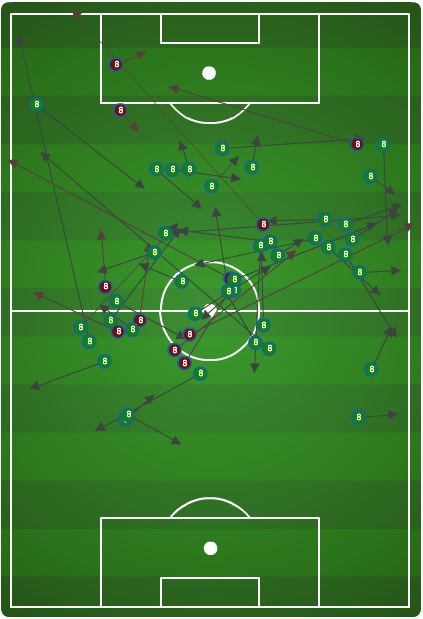 It was active, though very square. It was successful in stifling rare attacks. He won the ball regularly with his head. He was dispossessed only once. In many ways it was a very typical Evans' game where we can only judge if it was successful based on what his coach asked him to do.

Was he actually supposed to be a CAM? Or were Brad Davis and Graham Zusi supposed to be the assist men? If Jurgen wanted to run the offense through Evans that would be a mistake when there were clearly two better playmakers on the pitch. It is a reminder that a CAM is not just about the space on the field, but the strategy employed by the team. As a box-to-box center mid Evans had a great match.

At right back things are different and a mix of positive and maybe some negative when looking at the data. 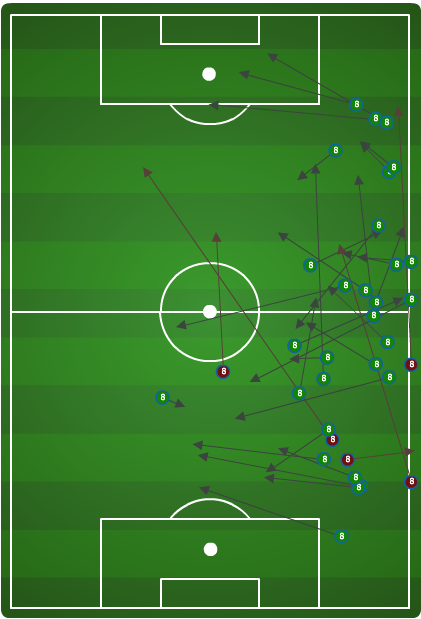 The second half had only six key passes from the USA. Three were from two creative players (Bedoya, Feilhaber) and three were from Brad Evans, he of the awful game. All three were on crosses. Those were the only crosses Evans tried in the second half. All were into the area in threatening places. In fact those spaces were in places where goals often originate.

Objectively, the data looks quite good for Brad Evans. There is the trouble that much of that data we still can not know what is important data to victory at the individual level and what is data without meaning. Subjectively, national observers did not see what they wanted to see from B-Rad. But did Jurgen Klinsmann? That answer will come when the roster against Honduras is announced.