Entering the final month of the season we must wonder how deep is this squad.

Once upon a time a Depth Chart was going to come out in August. The day I was to hit publish the club broke the depth chart by signing Clint Dempsey. After several weeks with the star on the squad and with just five games left in the season the Seattle Sounders FC roster is set and we may just know who the Ideal XI are.

The purple injuries are minor could be resolved for any upcoming match.

Every player on the roster at their most likely spot to be used if the club is at full health. Shaded boxes are for players who entered the season without a professional competitive appearance. The biggest debates will of course be at left mid and the forwards.

Additionally I've been told that Seattle only has a single roster spot open. I can not reconcile that math with what is public knowledge.

A bolded player is one that would start there on nearly any team and help that team towards a Playoff push. Regular font is for those who could start there for some teams. Italics indicate a player that could fill in at the role, but should not be expected to be a positive difference maker at the MLS level at this time.

Here again the wide mid situation may or may not be in flux. This is also operating under the assumption of Dempsey as a central mid (ish) player.

* Herrick is not a Sounders player, but practices here.

The 10 bolded players are the ones most likely to make an impact at the MLS level or better. Regular font listed players could have pro careers, but for some reason or another are not likely to do so. The only advantage that Jones has over Olsen is that Jones is closer to signing. One could argue, and I have at times, that Olsen should be above Kalamar. The HGP eligible players are deepest in the attack at this time.

* Sweet is moving around the pitch a bit recently and harder to classify due to that. He should be on a short list regardless. 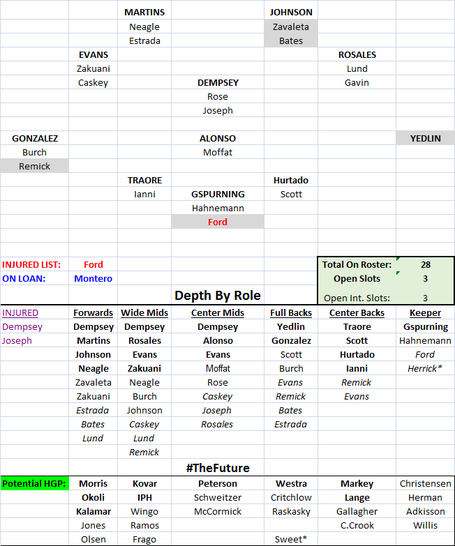