Scouting Report: More About Pride Than A Cup

Share All sharing options for: Scouting Report: More About Pride Than A Cup

It's true that if Seattle can earn a difficult win in Portland today, they'll win the Cascadia Cup that just a few days ago seemed all but within their grasp. But at this point that's almost secondary. The Sounders need to get their groove back. And if that means a good-looking draw that rebuilds their confidence but sends George to the Whitecaps, so be it.

A point would also clinch a playoff spot, solidify a top 3 spot away from the Galaxy, and keep them at least somewhat alive in the dwindling Supporters Shield race. And given what we've seen from the Seattle defense. . and. . well offense and midfield and goalkeeping and. . hmm.. passing and tackling — anything but an abject lay-down and 4 goal beatdown would represent progress.

Fortunately, there are reasons to think this game will be different, and not just because Seattle will be tired of getting trampled. Clint Dempsey will likely be fit enough to start, a rarity since he joined the team. Leo Gonzalez may even be available, which would help solidify the defense and free Marc Burch for the left wing role, from where he was an important part of the offense in midseason. Adam Moffat will have had more time to train with the team, which should help in his midfield partnership with Osvaldo Alonso, which I think we're very likely to see given his history in Portland and the need for a veteran presence in front of the defensive line. 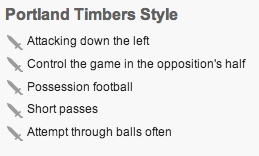 Also, I expect that the swashbuckling defensive line Seattle has been playing to be gone. In Colorado, the team was confident from a string of consecutive wins and looking to earn the Supporters Shield in one blow and so wasn't careful. And against Vancouver they were back at home looking to bounce back and earn the first hardware of the season, and so weren't careful. Today I expect them to be careful.

From Portland's perspective, they would very much like to replicate what the Whitecaps and Rapids did earlier in the week. Ideally that would mean a fast forward to burn Seattle's slow and/or inattentive center backs and fullbacks cheating into the attack. Unfortunately for them, they don't really have a player like Deshorn Brown or Kekutah Manneh. Ryan Johnson is fast enough, but not really enough of a speedster to just blow by a defense and besides. . he's away with Jamaica. Darlington Nagbe will be a good candidate, but he's still nursing an injury and is unlikely to play the full match, if he plays at all. That's probably also the case for Diego Valeri, which would be an enormous relief. He's just the kind of central attacking playmaker that can help tear up a shaky defensive line.

That'll mean that for much of the match, the attack will be Maximiliano Urruti and I guess Khalif Alhassan and Trencito Valencia? Sal Zizzo? There's certainly some threat there, but not the kind that's haunted the Sounders in the last two matches. And it's a deviation from the last time these teams met, when the Timbers' midfield was thinned out by injuries and absences.

Here's their average position map from their away draw with Vancouver: 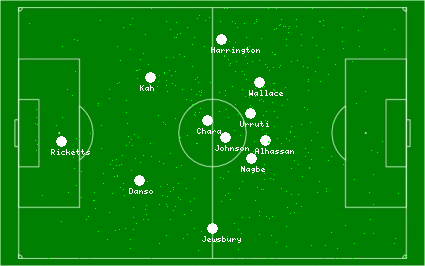 You can just imagine a single 'Osvaldo Alonso' dot in the middle of that attacking cluster in the center. That's why I think we'll play Moffat and pair the two of them deep in the central midfield. I'd expect a heavy dose of midfield possession for the Timbers and the Sounders to back off and bunker against it. That's something Seattle rarely does, but this is a game for it. And without the Eddie Johnson presence on set pieces, that means the best avenue for attack will be on the counter. Missing EJ is actually a help there, as his instinct on counters is to hold the ball up and pass it back to the midfield or defense, which has effectively ended many counterattacks this season. I'd expect Dempsey and Martins to be a little more eager to turn and rampage up the field looking for glory. And if Steve Zakuani can get a few minutes at left wing, he's another likely counterattacking outlet.

Another question is whether Seattle will continue to play at odds with their personnel. On Wednesday they continually tried to move the ball into the attack by playing off of Oba as a hold-up forward. It's a role he's ill-suited for and it didn't work. And when they advanced the ball through Rosales on the wing, he continually tried high crosses into the box, which have no target with Johnson not available. I think both of these irritating tics come down to the lack of attacking ideas. You can also see it when Rosales is out of the game. Against New York we saw it when the team desperately needed a winning goal against New York when Mau was out and they just had no idea how to advance the ball. . instead passing it back and forth across the defenders. The midfielders and attackers weren't making the right runs to get open for passes. That's a problem with preparation, and in the suddenly rather earnest question of whether Sigi Schmid is the best man for the job, that's a factor. If today we continue to see a Seattle that has no idea how to created an attack without Fredy Montero or Johnson on the field, it will not only not bode well for this match, I would be pretty pessimistic about the playoffs.

This will be the first time in the MLS era that Seattle will travel to Portland as clear underdogs. Up to now they've always played in the role of the generally better team in a hostile away environment. But the Timbers under Porter are a clear playoff team and have as good a shot at the Shield as anyone in the wake of the Sounders collapse. A point would be a relief and a win would — at least temporarily — bury the panic that has overtaken the team and fans in the last week and restore some confidence before we move on to the postseason. And according to the sim, we become favorites for the Supporters Shield again. It's effectively a reset button on everything we've gone through in the last two games. So let's try that.