Stuck in the Middle

The Sounders have not had a consistent midfield, either in personnel or performance. In their final games of 2013, they will need one.

Share All sharing options for: Stuck in the Middle

Last Sunday, I argued that there may be a relationship between the defensive involvement of the Sounders midfield and conceding shots on goal. A question came up (tip of the hat to dc13) of how midfield performance has varied with lineup decisions. Due to form, familiarity, availability, and role the performance of individual Sounders has varied considerably over the course of the 2013 season.

Sigi Schmid's lineup decisions reflect that reality. Over 32 MLS games, he has started 25 different midfield permutations (the most common of these - Neagle/Evans/Alonso/Rosales - only 4 times). 9 different central midfield pairings have started the game, and 12 different wide midfield pairs have lined up alongside. 13 players have accumulated more than 100 minutes in a midfield role. So... when someone asks (or tells) you how the Seattle midfield has performed, the best response may be 'which one?'

Over all the lineup turnover, has there been a noticeable impact on performance? Let's set several measures of midfield stats against the cumulative minutes 7 most-utilized players on the roster. 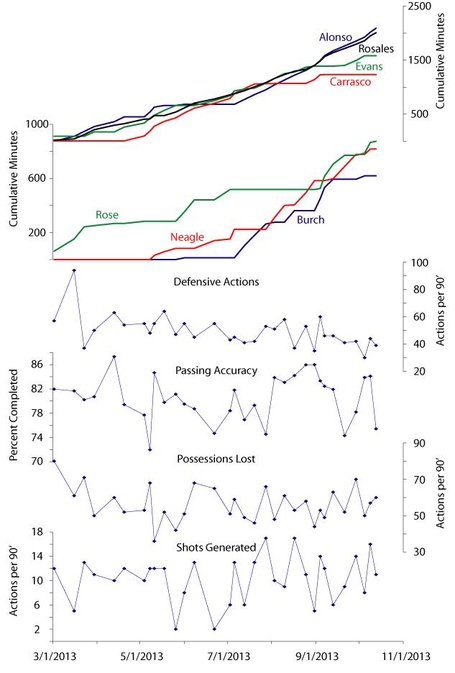 For all the inconsistency of personnel, the statistical variation over the course of the season has been fairly modest. The occasional absence of Osvaldo Alonso due to injury around midseason (around May, June, and July) may have made a dent, with a decline in simple passing accuracy. However, the trends of defensive involvement and turnover rate remain fairly constant over that period, and completion percentage jumped back on Alonso's return to the lineup and to form in August (this also coincides, to some degree, with Marc Burch's increased use in midfield and an easier stretch of games). Perhaps more of a concern is the bottom graph, describing shots generated (either shots from midfielders themselves, or assist and "key passes"). This metric does not exhibit a decline, but rather a startling level of game-to-game inconsistency. The pattern is not readily attributable to the use of any individual player, and the erratic nature of the lineup makes any such... scapegoating, for lack of a more appropriate term... very problematic. There are too many differences in the quality of the opponent and the form of the forwards to focus solely on the midfield, and too few games played. 2013 is, truly, not a fair measure of almost anyone in the midfield.

That having been said - what trends do we see in those midfield pairings or individual players used most often? For inclusion in the table below, a player much have at least 7 games playing over 50 minutes in a midfield role, and a central or wide midfield pairing must have started at least 4 games in those positions. Given how these games are spread out over the season with different quality of opponent and variable home field, we also need to adjust for difficulty. The table re-introduces the concept of "expected goals" - where Goals Enhanced (GoalEnh) is a measure of "extra" goals per game above what would have been expected of the opponent, in the same venue given an average performance and Goals Suppressed (GoalSup) is the corresponding measure of the Sounder defense. Shaded boxes are the top-performance in a category. Passes per 90 and Defensive Actions per 90 represent offensive and defensive involvement of the midfielders, respectively. 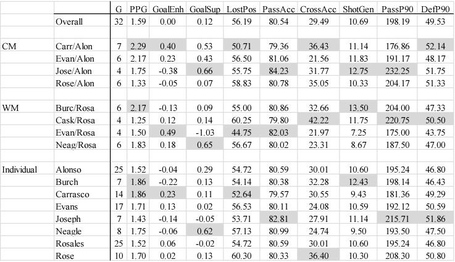 There's a lot of material to dig through in the table, and the sample size of any set under 10 games must be taken with a heavy grain of salt.