The Playoff Peak Does Not Exist

Share All sharing options for: The Playoff Peak Does Not Exist

The same platitude comes up around this time, every season. This year, spoken of the Portland Timbers...

"I think good teams do peak this time of year; they turn it up a notch," Porter said. "Whether that's by design or because you smell a bit of the blood in the water and you know it's important at this time of year to turn it up. ... We're peaking at the right time and we're confident right now, and that's what you want."

Head coach Hans Backe agreed with McCarty's sentiments, saying that winning on the road was "massive" and that it "means a lot for the Red Bulls" confidence. But Backe also added that New York may be peaking at the best possible time.

"It looks like we start putting things together the right way moving into the playoffs," said Backe. "You never know, but the last two games says it looks better than before."

...and there are many other examples. The notion that end-season form may feed into MLS Cup playoff success makes some intuitive sense, after all. Perhaps the roster is more healthy. Potentially, a late strategic change has improved play. Possibly, the team has adapted to an earlier episode of turnover in personnel.

If one believes this narrative of successful teams, its opposite might as well be true. If a team is losing consistently in the run-up to the playoffs, it must be losing for a reason - and what evidence so we have to suggest that reason will not persist in postseason play, particularly against stronger opposition?

Without gainsaying any individual team or the specific examples about, recent evidence shows no link between end-season and postseason form. Taking the last 3 Major League Soccer postseasons (2010-2012), let's chart playoff success against the results of the last 6 regular season games. 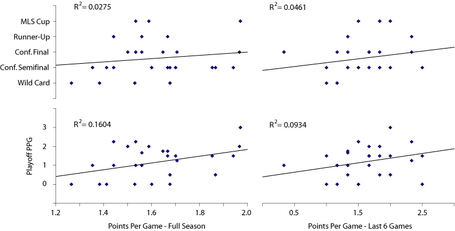 Each of these plots show a modest positive correlation and an immodestly terrible fit to the data. The "best" relationship is that between playoff success and full-season record (or, "better" teams - as established over the full season - are more likely to win playoff games). There are no trends to indicate a hot streak at the end of the season independently favors a strong playoffs.

The best (by a hair) end-season performance from 2010-2012, in fact, belongs to teams exiting the playoffs in the conference semifinal. 5 teams have entered on 6-game unbeaten streaks - 3 bowing out in the conference semifinal, 1 in the final, and 1 losing the cup match. The two best end season records (15/18 points) both belong to the Seattle Sounders, and they lost their semifinal home-and-away both years. The worst record in the last 6 belongs to 2011's Real Salt Lake, which earned 2 points of its last possible 18, drawing its last 2 games, and then demolished one of those Sounders squads 3-0 in the first leg at Rio Tinto.

The MLS playoffs entrain a set of teams having a very similar talent level (even more than is the case for the league in general) - and that fact of parity makes the postseason deeply unpredictable, driven by the same performance fluctuations we observe in our teams any month of the year. Streaking teams should avoid complacency and slumping teams should take solace - you don't need to learn to win in October to win in November.