Inside the Numbers: Some (Defensive) Reason for Optimism

Despite a late season collapse of the previously stout Sounders D, there is some statistical reason for hope heading into this win-or-go-home game against Colorado.

Share All sharing options for: Inside the Numbers: Some (Defensive) Reason for Optimism

With 13 goals conceded in their past five games,  a fair bit of blame for the late season collapse of Seattle would seem to lie with the defense.  While the Sounders boast a talented strikeforce, the team has struggled all year to consistently create opportunities.  Much of the success of the team is due to the defense, although this excellent Zach Slaton piece finds inadequacies all over the field.  Despite the recent dip in form, there is plenty of reason to believe the Sounders defense can rebound. 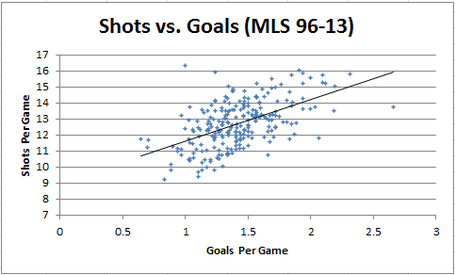 The above graph shows every team in MLS' history shots per game plotted against goals per game.  Unsurprisingly, there is a relationship.  Ok, so we generally know the less shots you give up the less goals you give up.  But what are the underlying defensive indicators that can predict fewer chances allowed?  And how do the 2013 Sounders stack up? 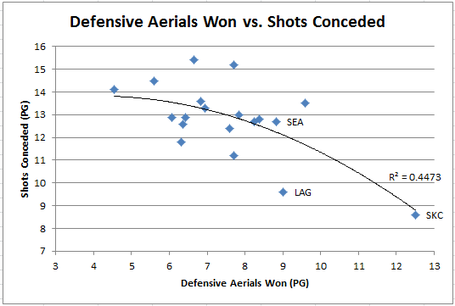 It turns out that defensive aerials won explains nearly half the variance in shots conceded.  The Sounders have done a good job all year in the air defensively, and are fourth in the league in this metric, just behind the LA Galaxy.  Another metric that Seattle scores well in is PAPPA (Passes Allowed Per Pressing Action), which is adapted from Colin Trainor's introduction to defensive metrics. A pressing action is defined as: tackles won + interceptions won + defensive aerials won.  The lower the number, the better.

PAPPA also explains a fair amount of the variance in shots conceded (though less than defensive aerials won). 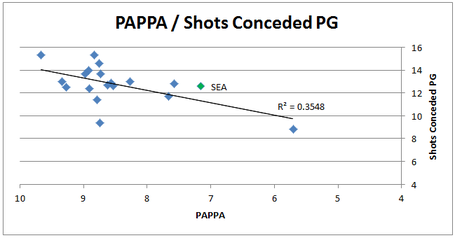 Seattle has proven this year that, when playing aggressive and intelligent defense, they are one of the most difficult teams to break down.  Tonight would be a good time to get that mojo back.