A look at the rapidly improving Rapids team that tonight stands between Seattle and the Supporters Shield.

After an ambiguous result in last weeks' match against New York, which could have decided the Supporters Shield one way or the other, the regular season race is still very much up in the air. The Sounders are still leading by PPG and by probability, but they're either (depending on which prediction model you believe) even odds with or slight underdogs to the field. Last night's loss by Montreal was a slight help in that it effectively eliminated the Impact from the equation, but they were long odds anyway. We're still in a four team race between the Sounders, the Red Bulls, the Timbers, and Real Salt Lake.

Tonight's match against Colorado isn't quite a must-win. With two games in hand and as long as none of the other three teams goes on a ridiculous tear, Seattle can still win the Shield with 60 points, which they can still get to even with two losses as long as they win their two at home and one of the three on the road. Or they can draw out on the road and still get to 60. But winning would, once again, put to bed a lot of 'what if's. Winning tonight and on Wednesday against Vancouver would clinch the Cascadia Cup and nearly clinch the Shield, with the team needing only 3 points in their last 3 games to get to 60.

And even if Seattle can't quite get to the Shield, the final regular season standings aren't academic. 'Home field advantage' in the two-legged series is mostly nonexistant, so the difference between 1 and 2 in the West isn't a huge deal, but the difference between playing a potential MLS Cup final against Sporting Kansas City in Seattle versus in Kansas is obviously a huge deal. So there's a lot to play for here. And fortunately Seattle has a history of success playing in Colorado, including a 1-0 win earlier in the season, which if nothing else should eliminate any intimidation factor.

Still, this is a dangerous Rapids team. Head coach Oscar Pareja has effectively integrated a very talented group of young players into a team that's on the verge of making the playoffs after a disappointing 2012 season, and they haven't lost at home since June. They have three legitimate candidates for Rookie of the Year on one team and it's marginalized some veteran players, like Matt Pickens and Brian Mullan — who were among the team leaders in minutes last season.

Here's the team's average position map from their last home match — a 2-1 win over FC Dallas: 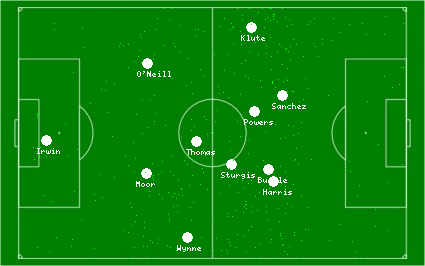 Among those young players, Chris Klute at left back has emerged as one of the real gems. There's a real chance that in a few years your regular fullbacks on the US national team are named Yedlin and Klute. You can see on the map how frequently he touches the ball in the attacking third as a regular overlapping fullback and why he leads the team in assists with 7. On the other side, Marvell Wynne has moved back to fullback after a few seasons as the fastest center back in the league, and now he can use his speed once again to roam the sideline, leaving the center to a very good tandem of Drew Moor and Shane O'Neill — another good young rookie.

In the middle ex-Wigan player Hendry Thomas holds the defensive midfield behind Nathan Sturgis, who plays the reserved box to box role he played with the Sounders in front of Osvaldo Alonso. And in front of him is Dillon Powers, another solid rookie who hasn't shown any signs of being intimidated by the pro game in his first season as an attacking midfielder.

If the Rapids have any weakness it's probably at forward. Deshorn Brown has come down to earth from his own very good early season to become an unreliable goal scoring threat (ruining my fantasy team in the process). And Edson Buddle has become even more of the Edson Buddle who wasn't good enough for the German second division and has an amazing ability to flub easy chances. Behind them was Tony Cascio, who's been his own brand of unreliable after a pretty good 2012 season. So in midseason they brought in veteran Uruguayan winger Vicente Sanchez and Panamanian Gabriel Torres as their first Designated Player to solidify the attack. But with only a couple of games under their belts they won't be acclimated to either the altitude or the rest of the team. Those are more moves for next year and hopefully Seattle can catch them while they're still unsettled, because when they are settled I think this will be one of the best rosters in MLS for years to come.

Another weakness might be a lack of midfield bite. The team is 16th in the league in net recoveries and they don't play with the midfield ferocity that you see from other playoff teams. That could give Osvaldo Alonso's partner in midfield (whether that be Brad Evans, Adam Moffat, or Andy Rose) the freedom to pick his head up and help with playmaking.

Because playmaking will be a problem. We know the Sounders will be without Clint Dempsey. There are burbling rumors that they will be without Obafemi Martins. If that's the case the seemingly eternal question of who will play forward will once again answer itself and we'll see Eddie Johnson and Lamar Neagle, which moves Neagle back to the position where he's been substantially more effective this season. And it continues the trend of the Federal Way native being the team leader in minutes among the attackers despite technically having lost his job at forward some time in late March. The team's inability to get even two of their vaunted three forwards on the field at once, much less all three, is approaching the amazing. But still, they've proven they can win a lot of games in that state and they can win this one. Johnson is a tremendous threat on set pieces and Neagle at forward is good for a few chances a game.

The maybe larger problem is that Leo Gonzalez also didn't travel. Marc Burch is a fine deputy at left back, but the problem with Burch playing left back is that Burch isn't playing left mid. And if Burch isn't playing left mid, the service to attack suffers as we revert to Mauro Rosales being the only player on the field who can create chances. That was shown in stark relief in the New York game, when in the last 10 minutes or so after Rosales had been subbed off and the team was desperate to break down the Red Bulls defense, they reverted to passing the ball around the defenders for minutes at a time with apparently no idea of how to get the ball forward.

Honestly, this is a match where I wouldn't feel terrible about Shalrie Joseph playing center mid to provide another outlet for creativity. . . as long as we have good defensive cover from the fullbacks and the wingers. But I wouldn't be surprised if Joseph didn't see another minute this season and given that it's a game on the road, sacrificing too much defense for offense probably isn't a gamble Sigi will take. Instead we might be once again down to set pieces to try to create chances, and that's where Johnson could shine again. Set piece defense is actually a strength of the Rapids so it won't come easy, but the Rosales/Johnson combo has been lethal this season and we may need it to be again.

Against a different fullback another option for creating chances could be Zakuani on the left as a sub, if he's fit to go for 30 minutes or so. He's the sort of player for whom providing or receiving service is sort of irrelevant since he creates his own chances. But Wynne neutralizes his greatest asset since he's one of the few fullbacks in the league who could keep up with Zakuani's pace.

So in the end it might be another game for sneaking one on a set piece (or a penalty or whatever) and holding on for 1-0 or 1-1. And holding them to 1 or fewer goals will require disciplined defense and good team defense on the right flank to shut down Klute. Fortunately Yedlin has the pace to keep up with him, but he will still get all the space he needs if there's any confusion in the Sounders defense when he overlaps with Sanchez on the left wing. It's probably best to have a mobile partner with him on the right side of central defense. . Hurtado or Traore over Zach Scott, say.

Don't be fooled by the Rapids position in the standings. This is a team in progress, but progress has been swift and sure. Barring some massive injury problems, this will be a team that competes for hardware in 2014 and 2015 and beyond. But right now the question is whether they will stand in the way of Seattle competing for hardware right now.