Seattle gets a chance to quickly recover from a bad, bad loss. It also happens to be a chance to win one Cup and get back into the driver's seat for the Shield chase.

If beating the Whitecaps to force the Timbers fans to hand over the Cascadia Cup doesn't get you up for a match, then I don't know how to help you. More pumpkin beer, probably. Tonight the Cascadia Cup will be in the building, borne by the usurpers from Portland who borrowed it for a year. If Seattle can get a result at home.. even a draw.. it will be returned to the Sounders faithful for Seattle's first trophy since the 2011 US Open Cup. . a rather long dry spell by our standards. But we know a win here is the right result.

And a win is important for that other little trophy on the line: the Supporters Shield. The Sounders loudly and enthusiastically shat the bed in Colorado and then waved the sheet around like that scene in Trainspotting so everyone could see how thoroughly that bed was shat. And that means Seattle needs to take care of business at home to get the Shield pursuit back on track. Because if they don't win in, you know who does? Maybe it's New York and their dainty captain who will only deign to play on a blend of 80% Kentucky bluegrass and 20% ryegrass. Does that deserve a Shield? Maybe it's Sporting KC, so they can talk endlessly about how they wrested a shield from us so recently after wresting a Cup from us. Maybe Jimmy Nielsen can waggle his tongue across the Shield for a while. How's that make you feel? Maybe it's the Timbers. Yeah, mull that one over for a while.

No, none of those work for me. And that means we have to win the Shield. And to do that we have to beat the Whitecaps. So that's happening. Fortunately, no matter what happened in Colorado, Seattle's home-fu is strong. The Sounders haven't lost at home since the opening game of the season, and that draw against New York was first non-win at home since July.

On the other hand, Vancouver will be motivated. Rennie is probably still telling his troops the playoffs are a possibility. And while the odds are very long, it helps that their last two games of the season are against the Colorado team they're chasing. I'm sure they can imagine a result in Seattle and then consecutive wins over the Rapids that — assuming San Jose doesn't do anything — could put them in playoff position. And of course there's the Cascadia Cup. If they can win tonight, they can still win the Cup for the first time in MLS play if Seattle doesn't win in Portland. So there's no reason to think they'll just be playing out the string or tinkering with the roster.

They might be forced to do a little tinkering due to international callups, though. Darren Mattocks has been called up to Jamaica, and he had been subbing in reasonably well for the injured Kenny Miller. With Miller still a longshot to play, we'll probably see either speedy Kekutah Manneh or lumbering Tommy Heinemann. After watching the Sounders defense getting torched by the Rapids attack I'd expect Rennie to go with Manneh there.

Seattle is affected by callups as well, but on net gets stronger than in their last match. They lose Brad Evans and Eddie Johnson because America needs them. But it looks like they'll be getting both Obafemi Martins and Clint Dempsey back from injury. Not a bad couple of substitutes to bring in. That again opens up the question of what to do with Lamar Neagle, whose dramatic performance differential between forward and left wing hasn't improved. Long term for the team playing him on the left is a good move, because assuming everyone is healthy in the playoffs, Neagle will only be playing if it's on the left wing, so the more reps he can get there the better. But this is a game for a Cup, and the priority has to be on winning, not grooming players for positions. So you could argue for playing the Oba/Neagle forward tandem that's played so well earlier in the season and move Dempsey to an attacking midfield position. The problem here is that with Evans out we don't have a left winger to replace him with. None of Alex Caskey or Steve Zakuani or Blair Gaven or David Estrada — all of whom could fill in there —have shown any signs of being ready to start in such an important match. So we may see Neagle there simply out of necessity until we can seriously talk about Zakuani starting agaain.

Here's the average position map from Vancouver's dramatic 2-2 draw with Portland on the weekend: 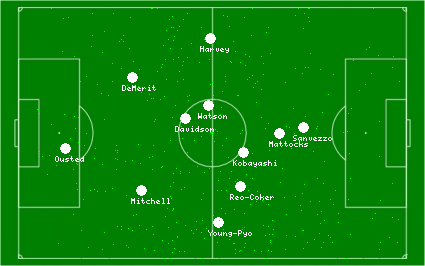 In theory, that's a 4-3-3 with Nigel Reo.C (as the kids call him) in the middle band, though against Portland he was aggressively moving up the right side to the point that he looked more like a member of the attacking band. Against Seattle I'd expect him to be more reserved, but he will still make the occasional dangerous attacking run. We've talked about Mattocks being gone, likely for Manneh. And Captain Canada Russell Teibert will likely return to the right wing, moving Kobayashi back a line.

But the attack right now runs through Camilo, whose scissor kick goal (which right now has to be a favorite for goal of the year) tied the game against Portland. He's going to be coming in off the left side and I'd expect him to be beelining for DeAndre Yedlin every chance he gets. The Sounders' home grown fullback had his worst game of the season against Colorado, as he failed to cover Deshorn Brown on the opening goal and was starkly overpowered 1-on-1 by Brown for the third, Now his task is to recover quickly from that game and help shut down one of the best attackers in the league.

At the other end, it's time for Dempsey to score. He's fought through injury for most of his time in Seattle and his few minutes on the field have mostly been ball-control exhibitions, but he was brought to Seattle to score goals. I would expect Vancouver's center backs and two holding midfielders to track him relentlessly, so the Sounders will have to find ways to get him into open space. . with counterattacks, quick passing, and dropping him into the midfield to find space. And their defensive focus on him should give Martins plenty of chances. He needs to finish those with more regularity than he's been showing. He's had some notable misses in the past few games. Finishing just two of those would have dramatically changed where Seattle is in the standings. Finishing two tonight would make it all better.