Scouting Report: What Has Come Before and What Will Be

Nothing is certain. Not even a lead in the home leg of a playoff series.

Share All sharing options for: Scouting Report: What Has Come Before and What Will Be

A week before, FC Dallas — the top ranked team in the West — traveled to Mile High Stadium to face the Colorado Rapids, who had barely staggered into the postseason after winning only 1 of their last 8 games. In a grinding, physical game typical of the adolescent years of MLS, Dallas left the away leg with a 2-1 lead thanks to goals from Abe Thompson and their superstar Carlos Ruiz. And now the Rapids were on the brink.

The return leg was also physical... violent at times. And in the 29th minute it boiled over when Dallas' usually reliable veteran defender Chris Gbandi went in hard on a sliding challenge over the ball and was given a straight red. Despite being down a man, Dallas delivered what should have been the dagger with a Ruiz goal just after halftime, forcing Colorado to score two just to get even. But the man advantage eventually paid off, and a second half brace from Argentine Nicolas Hernandez resurrected the Rapids, forcing extra time.

Just minutes into extra time, Dallas' young American defender Clarence Goodson delivered the telling goal that again could have finished off Colorado, but in the 115th minute another American defender — veteran Clint Mathis — tied the game for Colorado (after having another goal incorrectly called back for offside) and it went to PKs. In the 6th round of penalties Colorado's Joe Cannon saved a shot from his opposing keeper Dario Sala and Rapids captain Pablo Matroeni beat Sala on the next kick to win the series and advance Colorado to the Western Conference Final.

In the first leg, the Red Bulls — the top team in the Eastern Conference — beat San Jose — the 8th and final playoff team in a 16 team league — 1-0 away thanks to a goal from their newly signed Estonian Joel Lindpere to set up what should have been a victory lap at home in New Jersey.

But San Jose wasted no time in making it clear that's not how it was going to go down, as Bobby Convey was left wide open at the top of the box in the 6th minute and he beat Bouna Coundoul to even the series. The stalemate held until the 77th minute, which began a wild five minute period in which control of the series swung back and forth. First, Convey was sent through on goal and beat Coundoul again to give the Earthquakes a 2-0 lead and the lead in the series. But just seconds after the restart Juan Pablo Angel was left wide open in the box for an easy header to even the series again. And just minutes later a long Convey punt into the box found Chris Wondolowski and his looping header went in to give San Jose the advantage again. They held and won the game 3-1, won the series 3-2, and advanced to the Eastern Conference Final.

Just two years after their own series comeback against New York, it was the Earthquakes who were in the driver's seat. In a dominant, Supporters Shield winning season that saw Chris Wondolowski tie Roy Lassiter for the most goals in a season in MLS history, the Quakes were relentlessly winning games in the dying moments of matches, earning them a nickname so irritating I won't even repeat it. So it was fitting that in leg one in Carson it was a goal in the 4th minute of injury time — a 30 yard free kick from Victor Bernardez of all things — that gave them the series lead over the LA Galaxy, who needed a close win in a wild card match over the Vancouver Whitecaps just to make it to this series.

But in the return leg, the defending MLS Cup champion Galaxy didn't even leave it late for drama. They put the pressure on San Jose early and after Bernardez left the game with an injury in the 13th minute, it looked like the Earthquakes gameplan was undone. In the 21st minute Robbie Keane was allowed to dribble into an open shot outside the box and the series was tied. In the 34th a Landon Donovan throughball let Keane dribble around Busch and tap it in for goal number 2. In the 39th in front of a hostile but stunned home crowd Donovan sent a low hard cross into the box for Mike Magee to finish. It was only the first half and the Earthquakes' series lead was gone, their homefield advantage was gone, and even an 82nd minute goal by Gordon — a last faint echo of Goonie-dom — wasn't enough to keep their season alive.

There are many unknowns for the Sounders going into tonight's match against the Timbers. First, there's the personnel. If Obafemi Martins can play, that represents a dramatic upgrade at a position where Lamar Neagle has struggled to create chances in the postseason (and who won't be available thanks to yellow card accumulation). If DeAndre Yedlin can play, it reintroduces a critical component of our flank play, especially if we stick with the diamond. If Leo Gonzalez can't play, it puts significant pressure on Marc Burch to prevent the Timbers from creating chances on their right wing, where both of their goals came from on Saturday.

And there's the question of the formation. Against Colorado, Clint Dempsey looked very good as the point of the diamond. Against the Timbers and their ability to relentlessly double team him there, he did not. And the team looked much better in leg one after Mauro Rosales entered the game as a substitute. But his ability to play a right mid in a diamond is completely untested, and it's a dangerous time to be experimenting.

Even that hinges on Martins, really. If he can play, then you must play him, Eddie Johnson and Dempsey. And that means Dempsey in the midfield, which defensively requires more stout midfielders behind him, so Brad Evans and Adam Moffat — and Rosales frustratingly again left as a late substitute. If Martins can't start, I think there's a case to be made to move Dempsey up to forward in Neagle's absence and revert to the bucket midfield and wingers. In that case, Rosales is again available at right wing, maybe Evans to left wing, and Moffat and Osvaldo Alonso in the middle. It's a lineup that Seattle is very familiar with, though it hasn't looked particularly good against good teams this season.

Another option that I'm warming to if Martins can't start is to stick with the diamond but move Dempsey up to forward and let Rosales play the playmaker role in the middle. It's a role he's looked good on occasion in the last couple of years (mostly when he's swapped with Johnson to cut into the middle) and he certainly has the skill set to provide dangerous balls to the forwards. That gives us a midfield of Evans, Moffat, Alonso, and Rosales, which is nothing to sneeze at and keeps us in a formation that's shown promise late in the season.

Assuming we do play the diamond again, the game will again come down to the flanks. That's the weakness, as you overload the central midfield to keep possession there in exchange for opening up the sidelines. It was a wide open run down the flank that gave Jack Jewsbury the freedom to cross a ball to Ryan Johnson for the Timbers first goal. But to some extent those are the chances you just live with. If they make that play 10 times, I'd bet Johnson only flicks that ball at just the perfect angle to beat Hahnemann once.

You can see how wide the fullbacks were playing in the average position map: 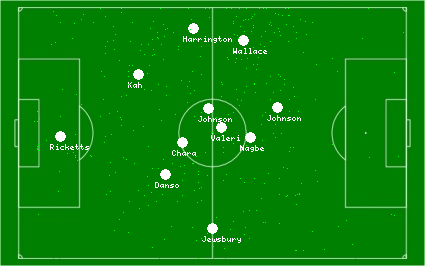 Porter gummed up the center with Diego Chara, Will Johnson, and Futty Danso trying to outnumber and starve Clint Dempsey of oxygen. Meanwhile on the flanks Rodney Wallace was left out wide to try to take advantage of Zach Scott (which he failed at, it should be noted, despite Scott playing most of the game with a cracked rib) and otherwise the fullbacks were tasked with moving into the open space to create the attack. Despite the Timbers' two goals, overall it was not a stunningly successful strategy. The midfield was successfully turned into a meat grinder with that many bodies involved, but Dempsey's skill on the ball gave him frequent enough chances to find open space. And in return Diego Valeri had to work through the same meat grinder and was completely invisible in the match. And, as mentioned, Wallace didn't take nearly as much advantage of the Scott matchup as I'm sure Porter hoped. With a potential Yedlin start, even that apparent weakness goes away and I would suspect it will be Nagbe's turn to try to work the flank this time to try to take advantage of Burch if Gonzalez can't start.

Teams lose series after going up on the road. Even very good teams. It's happened twice in the last three years. If there are Timber fans who are dreaming that the magic of Porterball means it can't happen again, they are opening themselves up to a very rude awakening. No matter how much Porter wanted to evade the topic on Saturday, Portland was every much outplayed by Seattle in leg one. They had two good chances and they finished them. Just Dempsey had three very good chances in the last 20 minutes, much less the rest of the Seattle team. If he hits those a little better, if his bounce off the turf stays a couple of inches lower, if his last second header goes anywhere but right at Donovan Ricketts' chest, we are having a very different conversation. Those are the inches that decide soccer matches, and on days when the inches go your way it can seem like your gameplan was perfect and your players were more determined and your victory was inevitable. It wasn't. You just got the inches.

This is not a game in which I suspect either team will be substantially outplayed. Seattle has the talent edge. The Timbers have the home field and the edge in familiarity with each other and the system. It will probably just have to come down to those inches and which team can find and exploit them. If Seattle gets the inches in Portland on Thursday, we'll have another entry in the growing list of Conference final turnarounds.