This offseason has seen a lot of player movement so far. With another round of the Re-Entry Draft, the SuperDraft and then the International Transfer Window GM Adrian Hanauer has some holes to fill and issues to solve with his yacht of Allocation Money.

If you've had some trouble keeping up with Seattle Sounders FC offseason moves there's a reason for that. It's been quite busy. Not just normal waivery stuff and shuttling of minor talents in December, but massive changes.

GM and minority owner Adrian Hanauer explained during the Eddie Johnson trade conference call that the moves were as much driven by cap issues as they were by a desire to change how the team behaves on the field and in the locker-room.

"A lot of it has been driven by salary cap issues. The roster cap challenges and the lack of allocation money to have flexibility with the roster. We also have wanted to and will continue to try to get strong in different parts of the field and maybe more balanced. I guess I probably should have started with the transactions that were pretty big ones for us in locking up Brad Evans, Osvaldo Alonso, getting a new deal done with Leo [Gonzalez], so we had some priorities kind of coming in to the offseason and we checked those off," Hanauer said. "Now we're trying to round out the roster. We certainly have, I would say, likely more moves ahead of us. And then I guess, transitioning into some of what Joe [Roth] and I addressed at the end of year business meeting, which is a continued focus on the type of soccer, the type of character we want in the locker room, and on the field, and I think we've added to that so far in some of our transactions. I think as future transactions transpire, they will probably be more of the same."

The quick version is that with this many changes one thing is certain, Hanauer & Co are not done.

Those moves leave Seattle with holes in the midfield, particularly in the wide box-to-box roles that fill out a diamond or in the touchline hugging winger types providing service. The centerback position is rather crowded. In some ways there are way too many forwards as well.

If one is to look at a Depth Chart the needs become crystal clear. Again, in three parts it is a Starting XI (assuming Diamond-ish shape), depth by role to demonstrate flexibility and the future of the club. 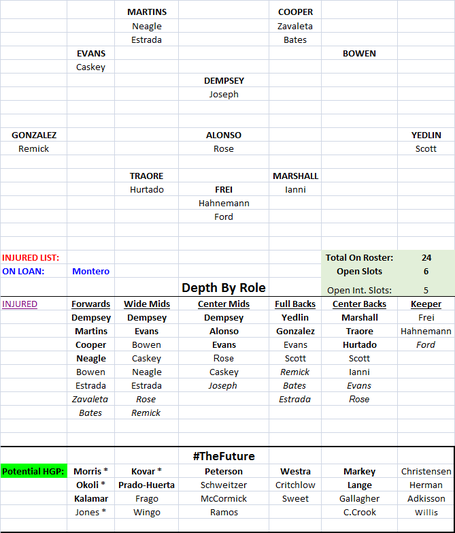 That midfield looks rather empty. Bowen, per Alicia, is a decent player, with promise, but should not be a regular starter. Backing up Dempsey are Caskey and Shalrie Joseph. Considering that Dempsey could miss a game or two early in the season on loan and several during the World Cup and preparations that's a distinct lack of depth in a vital spot. The midfield is the spot where Sounders FC likely drops a yacht-load of cash in front of a near DP quality player.

Centerback is the opposite. It is crowded with not-quite championship caliber starters. It is probably the only place on the roster where significant pruning can still occur. With no clear-cut leader to start alongside the newly acquired Chad Marshall who goes and who stays is likely to come down to perceived value in this league, or others within the Americas. With such a tight cap Seattle can not afford to waste money to go four deep on pricey veterans.

Forward has some depth, but Hanauer indicated that they may even be looking to add or change there. Being three deep in the scoring roles (four if you include that Clint Dempsey guy) is solid in this league. If you are looking for balance between youth and age the attack has it.

Establishing that finished product will come from Wednesday's Stage 2 Re-Entry Draft, the Super Draft (picks 13, 21, 55, 70 and a non-existent 6th round while possibly losing a pick to RSL and TFC), signing Home Grown Players (four are ready now and marked with a *), trades within the league and of course signing international talent when the window opens on, or about, February 12th.

One or two of the moves are going to be big.

"We need to dot the i's and cross the t's on Kenny Cooper and Tristan Bowen. That's maybe step one. We do have pretty good flexibility now, so I would count on one or two more pretty major signings potentially," Adrian answered. "They could be anywhere on the field. I think it's fair to say with Mauro and Steve going, that width in the midfield is potentially in the area that we'd be looking at, but we could potentially still be interested in getting better defensively, or at another spot in the midfield, or even adding another forward. I would say we're still pretty far from the finished product."

One or two major signings.

If you think the season's been silly so far, it's about to get down right crazy.