Do the Sounders have the creative players to make the diamond 4-4-2 work?

The Sounders are looking more and more like they may move to the diamond midfield for next season. Do they even have the right personnel to make that formation work? Are there issues with creativity that need to be addressed?

Share All sharing options for: Do the Sounders have the creative players to make the diamond 4-4-2 work?

The last few weeks in Sounderland have seemed like a whirlwind of moves, countermoves, juxtapositions, feints and trades and countertrades. Okay, that's hyperbolic to a fault but it's certainly been a rollercoaster ride of emotions with the departures of Steve Zakuani and Mauro Rosales.It's also been a consistent methodical approach to removing a lot of the wide attacking talent from this roster. It's undeniably what should constitute a trend as this team moved away from the hybridized 4-4-2/4-2-3-1 system of their past five years to their new formation as a diamond 4-4-2 over the latter half of the 2013 season.

While it is a more welcome tactical evolution of the Sounders over the empty bucket 4-4-2 (personal opionion) and a very clear attempt to leverage all of the Sounders attacking talent with the introduction of Clint Dempsey, it's also a formation that requires very specialized tooling and the right players to work correctly. One of the main complaints I had with the end of last season was the diamond re-tool on the fly. Bringing in Adam Moffat was an example at doing exactly this as the Sounders lacked a second true box-to-box style midfielder to play beside Brad Evans. Moffat wasn't the best choice for that role as his subsequent trade certainly highlights but he was most likely the only one available. It was a choice that cost the Sounders Servando Carrasco for a little over a month of Moffat.

The biggest strength of the diamond 4-4-2 is the strength of the midfield. Much of the evolution in the last 20 years in football has been about leveraging the central midfield to maintain ball and spatial control over the opposition and the diamond 4-4-2 is the ultimate expression of that. While almost every other system relies on a midfield trio, the diamond packs the midfield with 4 players. The use of four-men in central midfield is results in man-advantage in that space that allows many teams to maintain possession through the central midfield with ease (unless up against another diamond 4-4-2, the ugh). The carrilleros (alternate term: shuttlers), or widest two players in the diamond, become the important roles for facilitating and maintaining spatial control while the CAM becomes the main creative influences in driving play forward. With Brad Evans and his advanced tactical nous and creative capabilities his use as a carillero is probably one of the best choices the Sounders could have made in leveraging his skillset. The only question remaining is who the alternate carillero becomes.

At the same time the biggest weakness of the diamond midfield, the lack of width in attacking midfield and the susceptibility to the counterattack, is born directly of that strength . The system employs no wide players as the two forwards stay tucked more centrally and relies exlcusively on attacking fullbacks to give the squad width through the midfield. In many ways it's a system that gives DeAndre Yedlin his freedom on the right. There are certainly questions regarding Leo Gonzalez ability to fill the same role on the left given his age and that he's a more defensive LB option, but we've been shown no reason to think that Leo Gonzalez can't fill that role adequately.

Can the Sounders Use the RSL Model?

It's a tactical framework the Seatle Sounders are incredibly familiar with. 4 meetings in 2011. 5 meetings in 2012. 3 meetings in 2013. It a system designed around the dynamism and creativity of Javier Morales and Kyle Beckerman. Their diamond 4-4-2 requires creative impetus from both the CAM and the CDM. Javier Morales is one of, if not the, best central attacking midfielders in MLS and he is aided by Beckerman and Grabavoy, who in their own right, are creative players, that allow RSL to flourish even in games where Morales is marked out. However, the Sounders in their diamond midfield formation had no answer to this issue.

In their MLS Cup quarterfinal appearances against Portland, the Sounders utilized their diamond formation to little effect. With a defend and counter game plan, Portland were able to mark Clint Dempsey out of the match with Diego Chara. While Brad Evans, Adam Moffat and Mauro Rosales were trying their hardest to maintain midfield control spatially, they were really unable to generate any creative movement forward. That coupled with the fact that Osvaldo Alonso is a holding midfielder in the destroyer mold with limited playmaking capacity, it's no wonder the Sounders were stifled for quality chances on goal over both legs.

Over the past three years, Osvaldo Alonso has been consistently one of the best passers in MLS and one of the (if not, the) best defenders in MLS. But the whole package of Osvaldo Alonso comes with limited playmaking ability. Over the past three years, he has average 0.75 key passes per 90 minutes. Comparing that to his dreadlocked counterpart at RSL who has averaged ~1.5 key passes per 90, we see that Osvaldo Alonso just isn't in the same creative league as Beckerman. Some of that may be down to style of play considering Alonso has operated in tandem with Brad Evans for years (and briefly Christian Tiffert), but it's time to face to idea that Osvaldo Alonso might not be the playmaking CDM required for the diamond 4-4-2 to work in this fashion.

Without that deep playmaker the diamond midfield becomes a jekyll-and-hyde formation. The CAM becomes the main conduit for the sides playmaking ability and given the Sounders intent to use Clint Dempsey in that role(who in himself is not necessarily the most creative player, and is much better operating as a second striker or wide midfielder then as a playmaker), it becomes increasing clear that the Sounders could suffer from the same issues we saw in the playoffs. As Jonathan Wilson noted in 2009, " the danger of playing through one creative source, is that a single stream is easily dammed. The diamond's lack of width only exacerbates the problem."

What model do the Sounders need?

With that in mind, using plug and play box to box midfielders in the vein of Adam Moffat or Andy Rose are not going to be effective options if this team has any hope of winning the MLS Cup. It becomes increasingly clear that the Sounders need players who fit that playmaker mold as the carilleros. Unluckily, recent Sounders history is littered with players who fit that mold: Mario Martinez, Christian Tiffert, Shalrie Joseph(playmaking, not the carillero part). Given the indications that Mario Martinez may be on his way back to the Sounders, we may be seeing the response to these issues. But that's one move among a slew that need to occur.

Osvaldo Alonso's passing ability is his greatest skill in moving forward and the main strength he brings to the table in an offensive capability. This helps to reduce the emphasis the carillero's must have on transitioning play from deep into the CAM and allows them to focus on spatial concerns. This is where Brad Evans excels with the brain that allowed him to earn a RB spot under Klinsmann.

Furthermore it lends credence to the Mario Martinez rumors whose dribbling and passing skill, in addition to his creative ability(caveot: a skill only seen in brief spurts so far), are boons in a carillero role considering how he excels at finding space. In addition, the Honduran's set piece ability is something the Sounder are missing right now with the departure of Mauro Rosales. (I'm not particularly keen on seeing a season of Neagle/Dempsey laser blast set pieces). The retention of Leo Gonzalez at left back over a more attacking left back option(a Dylan Remick skillset as an example) gives the Sounders the option to play a more offensive left carillero. Simultaneously, adding in that more creative left mid option allows Clint Dempsey to roam left in attack while the left midfielder can slot in working as the CAM for brief spells of time. 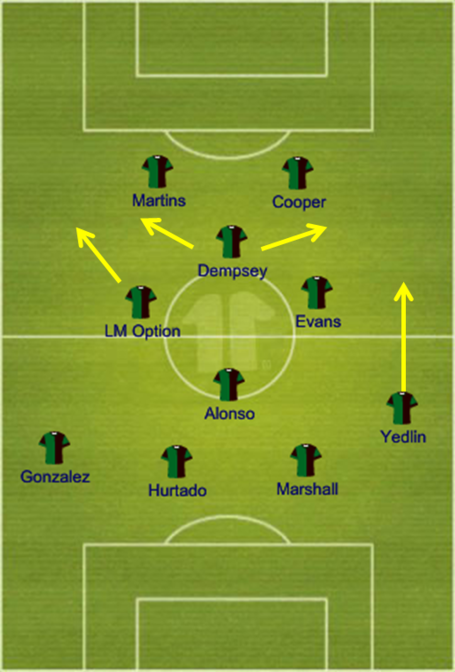 Ultimately, the question comes down to do the Sounders have the midfield creativity to make this system work? Unfortunately, we also really can't answer that question until the Sounders complete their new signings which will most likely only begin once the international transfer window begins. But right now, this team needs not only options at one primary position but backup options at all of the major creative positions. Clint Dempsey is going to miss significant time early this season with his loan, squad integration, along with the international ramp up and the World Cup. The latter also hold true in the case of Brad Evans.

Right now the Sounders lack depth for Dempsey and their left carillero. Andy Rose can fill in adequately for Brad Evans should the need arise but the other positions have no backups. In many ways, it's the price the team would pay for moving to such a specifically tooled system. It's going to need quality players with versatility and broad skillsets that can play multiple midfield positions. Bringing in Mario Martinez (or a very similar player(also, call me crazy but I'm seeing Lamar Neagle as an option)) would go a very long way towards fixing both of those issues in one move. Bringing in a player with a Christian Tiffert styled skillset fixes backup issues associated with Alonso and Evans.

Both of those types of players are quite often expensive. The salary cap makes one, let alone both, of those moves very difficult. The pile of allocation money Adrian Hanaeur is rolling around in makes them all believable.