Nenana Public High School has a team that competes in the state’s coed league, which includes other schools from small villages that don’t have the means to sustain full boys’ and girls’ teams. But the school has no field of its own — yet.

UPDATE | 8:45 A.M. PT, MARCH 6: The project to raise money and build a field in rural Alaska is over $1,000 closer to its $8,000 goal. I received the above photo from the project manager last night, as well as some positive words:

We took a picture to thank the Sounders fans. I am sending it to you to update your webpage and express our appreciation.

So, the news are these on the soccer field. I got a quote for $40,000 from a topsoil company. $16,000 will be to buy the topsoil and $20,000 to bring it down here. This is the first precise quote I managed to get from anyone, so it's good cause we now can start working towards that. We are still optimistic, I have written some more grants (the U.S. Soccer Foundation grant would be perfect but we missed the deadline for this year) and hopefully will get some publicity and people will get interested. The students are becoming really excited and will be organizing fundraisers, bake sales, cake walks.

The photo above is on the baseball field, where the Nenana High School team currently trains — not that you can tell, since everything looks the same under a foot of hard-packed snow. 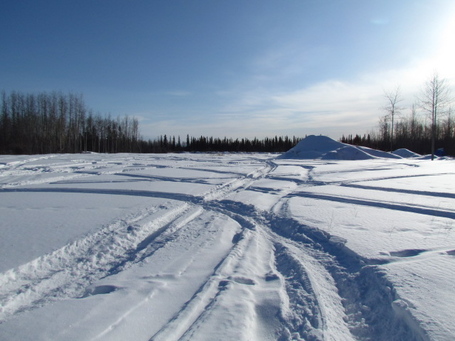 So you see what I mean about the snow. The little hill on the far side is the silt that will be used to help lay the field in the summer.

Andreas is from Athens, Greece, and he's a big Olympiacos fan. He added this tidbit at the end of his email to me that I thought you might find interesting. It's by no means a complete thought, but here you go:

ps Sounders should buy Martins. He is really good. We played Levante for Europa and they threw us out.

UPDATE | 8:25 A.M. PT, FEB. 28: Donations now total $890. The project has received support on Twitter from a couple of my other bosses at American Soccer Now and The New York Times. The response has been great, but I expected nothing less with our strong soccer community both in Seattle and nationwide.

At this point, I will not be updating the story further. For up-to-date numbers, here is the link to the donation page again.

UPDATE | 1:05 P.M. PT: The donated money now totals $640. The difference since the original story has been made up largely of Sounders fans and the Sounder at Heart community.

I grew up playing soccer in Fairbanks, Alaska. Before anybody asks, yes, we play soccer outside in Alaska.

Through the harsh winters in the frozen north, we played on gym floors in every available facility, but in those few months where we could play outside, we were lucky enough to have a full-size field complex with more fields than Starfire.

That's not the case everywhere on the tundra.

A friend of mine who I played men's league with, Andreas Droulias, is trying to change that for one lucky village about an hour away from my hometown. Nenana is not much to look at, and I never went there except on the six- to eight-hour drive to Anchorage.

Nenana High School's coed team has existed since 2001. To this point, a group of dedicated kids and coaches get on a bus for a 20-mile ride to another village, Anderson, for their "home" games.

A year after the program's inception, the school bought a bag of balls and a couple of goals. The team practices on the softball field, but a city block has been cleared for creating a soccer field, mostly through volunteer efforts in chopping down many trees and hauling them away.

Now, the field needs sod. Hauling topsoil from Fairbanks to Nenana, down the Parks Highway, is the biggest and most expensive challenge in the project.

That's where our faithful readers at Sounder at Heart come in.

I almost never use my platform for personal projects, but I felt compelled to ask for your help raising money in this case. This project is close to my heart because it is one of my friends spearheading the effort, but also because the idea of our beautiful game spreading to all corners of Alaska makes me very happy.

Go to this page to donate any amount you see fit, and please share this with all your friends who love the game as much as we do. A full history of the program and the effort is there as well. Here is an excerpt:

Co-ed soccer in Alaska's small schools still retains that pure competitive element that makes the game fun and beautiful. The fact that it is co-ed is actually an advantage. The level of competition does not suffer at all because, unlike other team sports, soccer allows for a variety of body types and skill levels to participate and actually make a difference in the game. Yes, boys are faster than girls but it is really fun to see the tiniest girl throwing the biggest boy off the ball because she knows how to plant her feet on the ground.

The students in the co-ed tournaments play their hearts out every soccer season and they do it with style and sportsmanship. They meet the challenge, compete and the joke about it after the game. There is no yelling, no cussing, no spitting, no dirty fouling, and no fighting. Alaska style soccer captures the essence of the game.

And this why it is important to support and promote rural Alaska co-ed soccer any way we can.

In 22 days, Droulias has raised $500 of an estimated $8,000 needed to complete the project. The final cost may be much higher, he tells me, as he has heard it may cost as much as $60,000 for the transportation of topsoil from Fairbanks to Nenana.

But this is a good start, and it shows the city that the community is serious about wanting its own field. Imagine not having a place to play soccer. Don't let this community suffer through that any longer.