The new Sounders style was revealed at a private party in downtown Seattle at the Cinerama.

This evening, Sounder at Heart was present at a private Sounders FC party in downtown Seattle for the official reveal of the 2013 kits. Current impact players including Eddie Johnson, Mauro Rosales, Brad Evans, Michael Gspurning, and Steve Zakuani were on hand to model the new kits. Mere days before the opening kick, those on hand were presented with each a Rave Green and Shale option, just as last year. The modern variants however, do not use matching designs and do not suffer the much-maligned silver straps of the 2011-2012 era.

As has been seen in leaks over the past month, the green primary kits feature a silhouette of the Space Needle across the right chest (assuming you don't wear your numbers in the front). The expected Adidas stripes on the shoulders are blue, matching the previous kits, and the love handles are painted blue. The pictures show the jersey in companion with blue shorts, which have green Adidas stripes down each side and a touch of green around the bottom of each leg. The crest adorns the right leg. 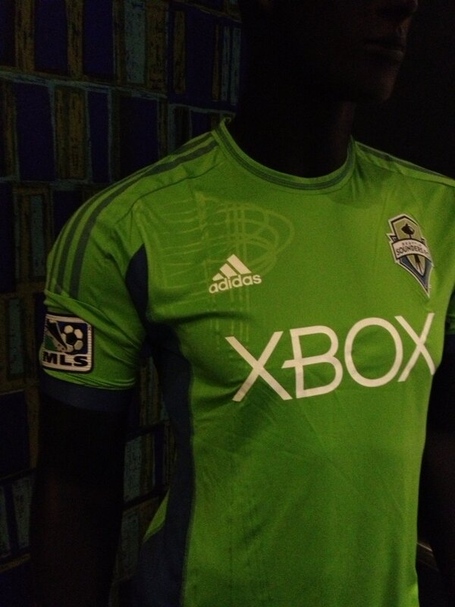 With the shale kits, there is no alternate color under the arms; only a slight green stitching and green Adidas piping on the shoulders. The deep grey shines like the hair of a thoroughbred, which sounds weird. However, the main attraction is a vertical patterned stripe down the left chest and through the Sounders crest alternating between blue and green. It is worth noting that this feature is vastly different in the "replica" kits being sold through the team store; only green is present in those versions. These were demoed strictly with shale pants. 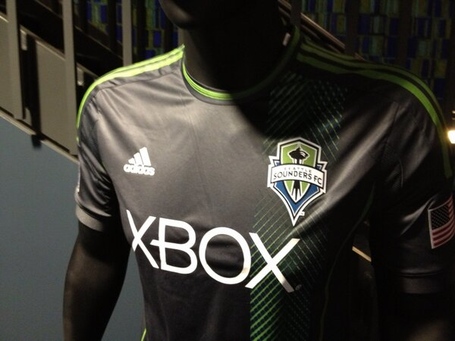 The shown goalkeeper kit was all white with black over the shoulders.

There will be a new number font league-wide, and that is reflected on Seattle's new shirts, though the sponsor (XBOX) remains the same through the 2013 season. Both kits read "Sounders FC" inside the neck. No green shorts were seen at the event, though they certainly may still exist (green on green was a popular choice in 2012). Those expecting MLS to update their crest in the very near future may be disappointed to see the same "shield" of the last two decades still adorns the right sleeve, while the American flag occupies the opposite arm. On both kits, the socks matched the displayed jersey. The jerseys are available now, with more images and angles.

The Sounders FC team site was updated soon after the event with a photo gallery. Make your first impressions, then sound off below.