First kick is just a couple days away and if you're anything like me, you've changed your fantasy roster about a dozen times. I'm attaching a photo of my first fantasy roster--which does not, in the slightest, resemble my current fantasy roster. (In fact, only five players of these players survived the reaping.) I would like to think my 15 is stronger now, but really...who knows. 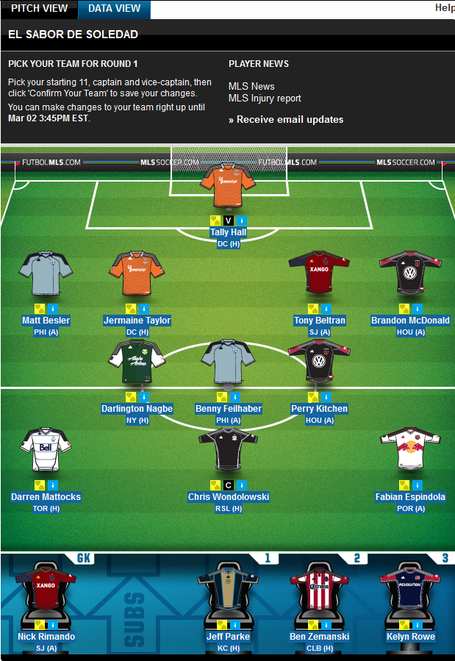 I include this lineup-that-was for two reasons: 1) to show how compulsively I change my lineup in preseason and 2) to note the fact that there are no Sounders on either team. I just couldn't do it. Seattle's defense is in flux and there aren't any real offensive threats in that back line anyway, save maybe Ianni. Mario Martinez ($7.5) and Steve Zakuani ($8.0) weren't the bargains they should be in midfield, and Mauro Rosales would've broken the bank at $9.0.

For me, it came down to whether or not I would add Eddie Johnson as my second forward alongside Wondo. With a second-week bye for the Sounders and the small number of transfers available in the MLSsoccer.com league (usually 2-3/week), I didn't want to burn a transfer on EJ right out of the gate, and I don't have the depth to cover him. (I ended up selecting Federico Higuain.)

We'll see about week 3, EJ. The Timbers at home might be a good matchup for you.

What about you guys? Which Sounders do you have in your fantasy lineup?

Remember: it's not too late to sign up for the Sounder at Heart MLS Fantasy League. To join, head to fantasy.mlssoccer.com, create your team, and use this code to join the league: 9484-1855. You'll probably be able to get 4-5 roster iterations in before then.