Today's match is on BeIN sports with coverage starting at 12:30 and kickoff right about 1 PM. Connections to the Seattle Sounders are as strong as they've ever been for a World Cup Qualifier.

A road match in CONCACAF World Cup Qualifying is about getting points. Either a win or a draw sets the United States up well for the rest of their journey to Brazil 2014. A loss does not do the damage many supporters think. It is important to remember that The Hex is like a mini-league where the top three teams go to the next World Cup and the fourth qualifies for a Playoff against the winner of Oceania.

Both sides of the ball have a many Sounders' connections. For the United States there are current Sounders Eddie Johnson and Brad Evans. While neither are starting both have a chance at getting some playing time. EJ's ability to play the left and of course as a great target man means that he can be inserted late earned the start, nominally on the left. He will look to take advantage in set-play situations. Evans' best chance is as a late sub to hold a lead or due to an injury at right back. Gomez also was once a Sounder. 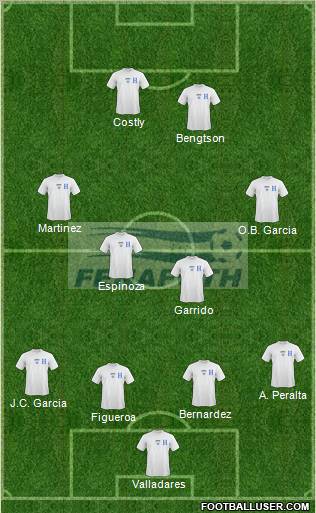 Black & Red United looks at how Honduras will lineup, attack and defend against the USA

Honduras has current Sounder Mario Martinez. Mario Mart is certain to start. Two players rumored to have drawn interest from Seattle are also on the roster though neither will start - Wilmer Crisanto (RB, rumor dead) and Jose David Velasquez Colon (CB, possible future trialist). Their squad ise a mix of MLS players, lower Euro leagues, some from Honduras and even a couple EPL players. It would not be going to far to refer to this as a potential Golden Era for the Central American nation.

The keys for the Americans are simple;

Am told lineup for the US against Honduras is: Howard; Chandler, Cameron, Bocanegra, Johnson; Williams, Jones, Bradley, Zusi; Dempsey, Gomez

UPDATE: Leader was wrong. Gonzalez is in for Boca, our own Eddie Johnson is in for Zusi on the left, and Altidore is starting up top instead of Gomez.

This is your gamethread

USA at Honduras opening World Cup Qualifying in the Hex