Scouting Report: Putting One Finger on the Cup

The season is young yet, but the signs are that Portland will be a more dangerous team than they were last year. Are they dangerous enough to threaten the Seattle Sounders in their own den?

Share All sharing options for: Scouting Report: Putting One Finger on the Cup

It will be a tough task to wade through the layers of drama leading into this weekend's Cascadia Cup opener against the Timbers and get into the tactics.

Go on, pick a storyline.. It'll kick off the first season in the 10 year history of the Cup that Seattle will try to win it back after losing it to the Timbers. Previous to 2012, Portland had only won it with the Sounders out of the league. It'll be the first Cascadia Cup match for the Timbers' 3rd MLS coach Caleb Porter. Who, incidentally, coached Sounder DeAndre Yedlin last season at Akron. Who, incidentally, has detonated onto the local (and national) soccer scene with his performances in the first games of the season.

Oh, and new mega-DP Obafemi Martins will be at the stadium. Maybe even dressed for the match.

But for all that, the game will be decided in the shape, the lines, and the movement on the field. So back to the Timbers. Here's the average map from their first half against Montreal last week. 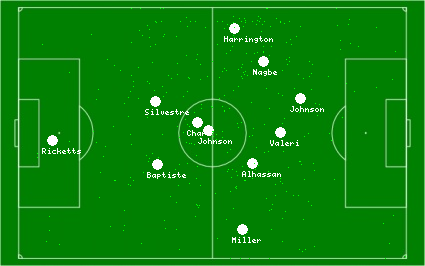 Porter has instituted a possession-oriented 4-2-3-1 in the Rose City. At home against an Impact team happy to bunker deep, it was a very aggressive posture, with the fullbacks nearly as far up the field as the attacking midfielders. That puts a lot of pressure on centerbacks Mikael Silvestre and Andrew Jean-Baptiste and holding midfielders Diego Chara and Will Johnson. Thus far this season that pressure has been too much, with Portland falling behind in both of their first two matches and only an epic comeback against the equally defensively fragile Red Bulls salvaging one point in two games at home.

It's very unlikely that the fullbacks remain that aggressive away from home in a tough environment at CenturyLink, which will narrow the attack through Nagbe, Alhassan, and Valeri in the middle, underneath lone striker Ryan Johnson.

That's not bad news for Seattle, since the central defensive midfield is the domain of Osvaldo Alonso, a one-man Roman phalanx. And both Jhon Kennedy Hurtado and new signing Djimi Traore have looked defensively solid early in the season. That would suggest that even away from home, Portland will be relying on overlapping fullbacks and midfielders drifting out wide to attack the flanks. On the right, we expect to see Yedlin again as Adam Johansson is still out injured. He's a young player and should be expected to make some mistakes (whether or not getting trucked over by an Alberto Acosta stiff arm should count as a mistake is a matter of some debate), but one thing he has going for him is his recovery speed, which is tremendous and helps paper over positioning errors. On the other side, Marc Burch is available again after his suspension to start the season. He appeared for a few minutes to close out the comeback win over Tigres, but is otherwise fresh.

At the other end, Seattle's depth and the impending arrival of Martins mean that the Sounders' attack has some questions. Certainly Eddie Johnson will be there and we've probably seen the end of Mauro Rosales playing underneath him as a withdrawn forward, both because Rosales is likely out this match with a back injury and because it never really worked that well anyway. That means his partner — and I'm assuming here it's not Martins. . I think it's unlikely he'll play at all and incredibly unlikely he'd start — will either be Ochoa or David Estrada, who's coming back from a preseason injury. Rosales' absence creates a spot on the right for Mario Martinez, and Zakuani should run the left. And Brad Evans' injury creates a spot for Andy Rose in the middle.

If the wingers, particularly Zakuani, can pin back the Portland fullbacks, their attacking width will be neutered, letting the Seattle fullbacks pinch in to assist Rose and Alonso in the middle. And if they try to push up anyway, Zakuani and Martinez should have a field day playing behind them and forcing Will Johnson and Chara to move laterally to cover.

With both teams employing two defensively minded central midfielders, they're fairly close to mirror images. If you recast Seattle's withdrawn forward as an attacking midfielder (and the difference is really only a few yards of space), it's essentially the same formation. Given that, a position-by-position comparison is somewhat useful. And it's a comparison that's generous to Seattle. Would you rather have Eddie Johnson or Ryan Johnson? Alonso or Chara? Jean-Baptiste or Hurtado? Gspurning or Ricketts? The only positions where I'd give the advantage to Portland are Valeri over Estrada and Will Johnson over Rose. (And note that both are playing due to injury. With Martins in and Evans healthy, it's a reasonable assertion that Seattle has the better player at every position).

But even with the two reserve players, Seattle has more quality, they're fresh off of an emotional and inspiring second half comeback over Tigres, and they'll be at home in front of a raucous crowd. Anything can happen in soccer, but this is a game that Seattle should dominate in possession, forcing Portland to rely on counters — which the Sounders are capable of sweeping up with Alonso's midfield domination and Yedlin's speed — or some magic from Diego Valeri. And if your primary hope for victory is relying on magic, you're in a tough place.