The Portland Timbers stole a point late from Seattle Sounders FC, tying 1-1 on Saturday. It was a fair result given the play, which Sounders FC saw the better of early, and Portland did the same later on. 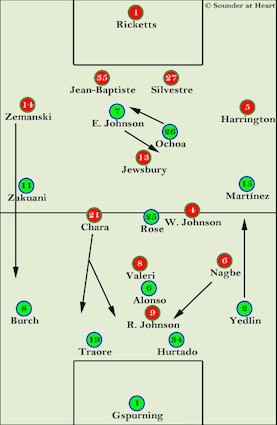 SEATTLE — Sounders FC and the Portland Timbers could not make their skill match the fans' enthusiasm for Saturday's 2013 Cascadia Cup opening match. A defensive lapse on each side, one early and one very late, punctuated a 1-1 tie mired in disconnected passing and rusty execution.

The formations were typical of what the Sounders and Timbers have displayed in recent history. Seattle trotted out Sigi Schmid's usual 4-4-2, while Portland played Caleb Porter's favorite 4-3-3.

Osvaldo Alonso was back to his normal role after missing the first league match through suspension, mopping up in front of center backs Jhon Kennedy Hurtado and Djimi Traore.

On the opposite side, the big change from the first two games was Jack Jewsbury's inclusion, bumping Kalif Alhassan to the bench and Diego Valeri to a higher position.

Ben Zemanski also made his first start of the season for Portland, coming in for Ryan Miller at right back.

Both goal-inducing errors came not from outside backs but from central players.

First, Diego Chara carelessly spilled a ball that allowed Steve Zakuani to pounce on and find Eddie Johnson in the box for a good finish.

The most egregious part of Chara's mistake was how easily it could have been avoided. Had he made the pass in front of Zemanski with the inside of his left foot instead of trying to flick it with the outside of his right, it likely connects and Portland continues its march up the field.

Instead, he gives it away, and it leaves the Timbers defense stretched.

Then, Rodney Wallace was left unmarked for an entire attacking sequence in stoppage time, and he made the Sounders pay by tying the game.

The sequence lasts the duration of three balls into the Seattle penalty area, and Wallace is entirely unmarked for the last two balls in. A combination of ball watching and a lack of communication and tight marking is what does the Sounders in on this one. 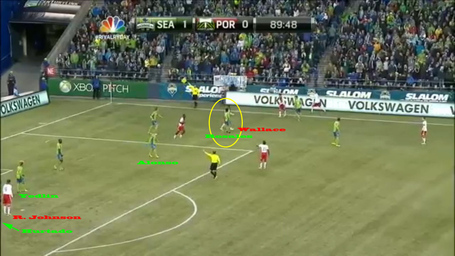 On the initial throw-in, Mauro Rosales is tightly marking Wallace. In the penalty area, Hurtado (out of picture) marks Ryan Johnson, and Eddie Johnson (also out of picture) is back to take care of Frédéric Piquionne.

DeAndre Yedlin and Djimi Traore are both marking nobody. Keep that in mind; it becomes important later. 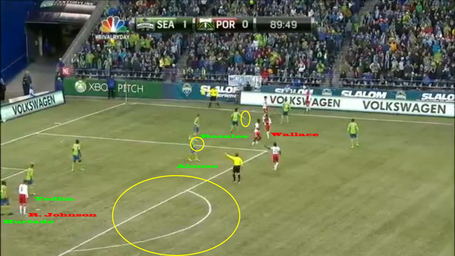 The ball is cleared for another throw, and Wallace spins away from Rosales. Wanting to stay in the most dangerous area of the field — which is always wherever the ball is — Rosales attempts to pass Wallace off.

Trouble is, he never really passes his mark off to anybody. His hand is clearly pointing at Wallace as if to say, "Hey, I'm letting him go. Somebody else pick him up."

In defense, players are taught to never leave a player until another defender verbally confirms that he is taking over the mark. It almost looks as if Alonso is saying he will take Wallace (and perhaps also pointing at him), but he never actually gets close to the Timbers substitute.

Meanwhile, Wallace sees the giant gap on top of the penalty area where any cross or knockdown is likely to land, and he heads straight for it. 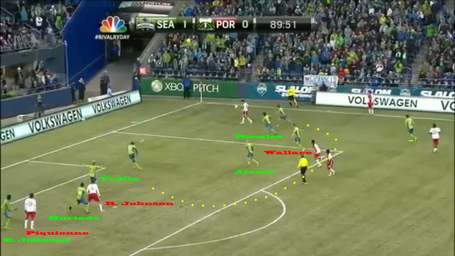 From the point Rosales lets Wallace go to the point where his head meets the ball on the finish, he is totally unmarked. Throughout his entire run, he passes by three or four Sounders defenders without drawing as much as a look.

Everybody is focused on the ball. Rosales and Alex Caskey go to close down on one player, and Traore stands in the space to block a near-post cross. 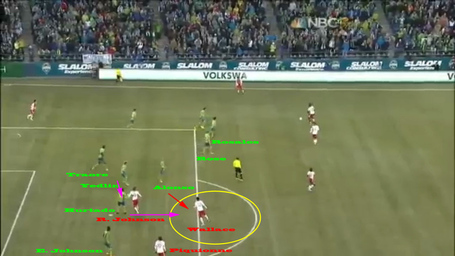 Yedlin clears the ensuing cross, but the defensive line fails to step out of the penalty area. Wallace still has the entire "D" (the area where the arc meets the penalty box) to himself.

Hurtado is still tight on Ryan Johnson, and Eddie Johnson is still marking Piquionne. Nothing is wrong with either of those — the breakdown comes with the fact that neither Yedlin nor Alonso are marking anybody, and they don't seem to be looking around for anybody to pick up, either.

At this point, Hurtado, Eddie Johnson and goalkeeper Michael Gspurning should all be yelling for Wallace to be marked. This could happen any number of ways: Alonso could step directly to him (red line), or Hurtado could pass Ryan Johnson off to Yedlin and step to Wallace (purple lines). 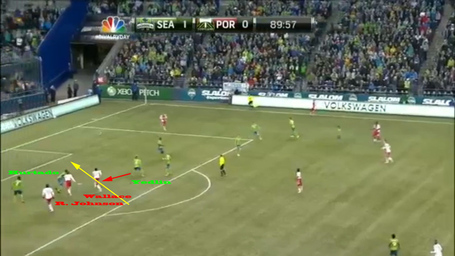 Instead, Wallace finds another gap in the Sounders defense, splitting Hurtado and Yedlin with his run. Again, this would be a good point for some communication.

Now, the only real option would be for Yedlin to slide to his right and pick up Wallace's run. 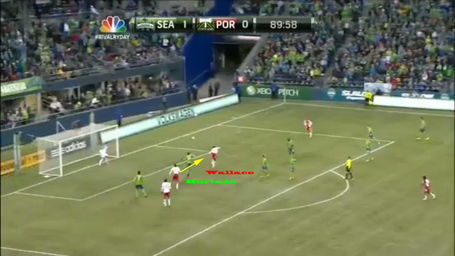 By the time he decides to leave Johnson and try to cut off Wallace, it's too late. He has to hold his ground initially because if he doesn't, the ball could be played over his head to Johnson.

It's not entirely Hurtado's fault that Wallace has that much space to pick his spot and head home, but he could have helped himself and his team out with some early vision and communication.

Until that point, Seattle seemed to have the game in hand. Portland could not respond to the Sounders' early goal, despite having the majority of the possession for the rest of the game.

The Timbers did their opponents a favor before the match even started that made little sense, given the team's performances in its two preceding MLS games.

They moved their best player out of position and effectively gutted their own attack. Head coach Caleb Porter made this decision despite every player being healthy, and after naming an unchanged lineup the previous week.

In the first two games, Valeri played behind Ryan Johnson in the traditional No. 10 — or enganche, to use a word with which Valeri is undoubtedly familiar — playmaking role. Moving him to the front line meant he had to drop into the midfield to find the ball and create.

This left a gap on the right side of attack that Zemanski had to fill by overlapping from right back or Chara had to slide into from his point in the midfield triangle. Neither proved to be an effective mean to attack.

Darlington Nagbe had the most success with runs through from the opposite side, but he couldn't connect on the finish.

On the opposite end, perhaps because of Zemanski's need to step and fill the gap, Seattle had a great day running down the left side. Zakuani found success running with the ball at his feet, not least when he assisted on the Sounders goal.

Mario Martínez had an extremely quiet day on the right side, though. Yedlin made more of an impact than the winger did in the attack.

Although they can't all be great days, the Sounders have come to expect more from Martínez. He is a game-changer when he is in good form, which he was not on Saturday.

Perhaps he was just showing the early-season form many of the rest of the players on the field were exhibiting. It certainly was not the exciting match fans have come to expect from the Cascadia Cup matchups.