The Seattle lineup has some holes this weekend, but San Jose has holes you could drive a truck through, so the Sounders have a good shot at a positive result in their first road match of the MLS season.

For different reasons, neither the Seattle Sounders nor the San Jose Earthquakes will be fielding their first choice forward complement in this weekend's match in the Bay Area.

For San Jose, the problem is injury. Both Steven Lenhart and Alan Gordon remain unavailable for the "not-Wondolowski" role in the Earthquakes' attack after offseason surgery. In the opener it was locally popular Mike Fucito who took over as starter, but he also picked up an injury in their second match against New York, forcing rookie Adam Jahn — their fifth forward on the depth chart — onto the field. That turned out pretty well, as Jahn scored a goal in the match and set up the injury time penalty that would give the Quakes the win in that match. Jahn then started last weekend in Columbus, and we should expect him to again get the start at not-Wondolowski.

Jahn is a big player in the mould of the other two San Jose target men and superficially fills the role, but keep in mind that Wondo's game is built on ghosting into open spaces — in other words, in not being paid attention to. And forcing a defense to not pay attention to a golden boot winner is a pretty tall order. It takes a partner who can demand attention. That's something that Lenhart excels at. He's not just big and dangerous in the air, he is intentionally tremendously annoying. Forcing not just his marker but the entire defense to pay attention to his antics diverts focus away from Wondolowski's late runs into the box and drifts into open space, which free him up for the open looks he needs to score (given that he is not, contrary to popular to belief, a particularly incisive finisher). Thus far no one else has managed to give him that space this season. Outside of his penalty, in three games this season he has no goals and only 3 shots on goal, putting him on a pace for his lowest total in both since he became a regular MLS starter.

The season is young of course, and Lenhart is scheduled to come back any week now, but if not for an injury time penalty against New York, last season's runaway Supporters Shield winners would have two points through three games, and that has to be a bit worrying.

Seattle's issues at forward are mercifully unrelated to injury. Instead, our top two are on international duty — Eddie Johnson with the US and Obafemi Martins (still awesome to write that, by the way) with Nigeria. Seattle is not deep at forward. It was Sammy Ochoa who did a workmanlike job at target forward over the first few weeks of the season and we should expect to see him again. Reviews of his play are mixed, but I think he holds the ball up well without being too goal dangerous himself. That's fine if your partner is Johnson, but this weekend his partner will likely be David Estrada, who's just back from injury. Estrada has shown flashes of lethality now and then, but his primary skills are tenacity and work rate. That means a starting forward tandem of two grinders and not a lot of creativity.

That's not the worst situation to be in in the first away match of the season. Grinding out a result is a skill and one that Seattle is improving at. But the Seattle attack is likely going to be built on speed and counterattacks this season, and in that regard this game will just have to be an anomaly. Neither Ochoa nor Estrada is a burner and that leaves Steve Zakuani as the only realistic counterattacking outlet, something I'm sure Frank Yallop and his right back Ty Harden is well aware of. On the plus side, Ty Harden is Ty Harden. He's the Quakes' third string right back after Steven Beitashour and Dan Gargan. It's possible Gargan will be fit to go, but he's still Dan Gargan. Zakuani should be able to overmatch either. Normally the Quakes would then have cover as titanic center back Victor Bernardez slides over to help, but the Honduran is out playing for Honduras. That leaves Nana Attakora or an equivalent backup to do the sliding. Plus Justin Morrow is also out playing for the US, so the backline will be even further destabilized. The game may well be determined by how well Seattle reacts to San Jose's adjustments to deal with Zakuani, and that's where Ochoa and Estrada will have to show their awareness and ability. 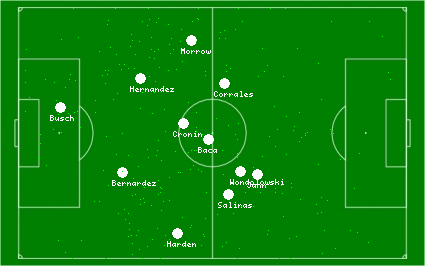 That's a pretty substantial offensive lean to the right, and it's not an anomaly. They did the same thing against New York. Wondolowski prefers to start his ghost-runs on the right side, often situating himself as a right winger when an attack starts. And his partner will suck over at the same time to distract the defense enough to give him space. That creates a big gap on their offensive left. Last season Simon Dawkins would drift into that space from an attacking midfield position and do some damage, but he's now plying his trade at Aston Villa, leaving that side to the venerable Ramiro Corrales (who may drop back to left back to fill in for Morrow) and late runs from Rafael Baca, of which there have not been many.

That should free the Seattle defense to keep at least three eyes on Wondolowski at all times to track his movement. Jahn seems like a fine player, but the rookie should be manageable with one of the Sounder center backs, and we should see less offensive threat from the Earthquakes patchwork fullbacks, which frees our fullbacks to provide even more defensive cover to the middle. And that gives Osvaldo Alonso license to dominate the central midfield and spark counterattacks to keep San Jose on their heels.

This is not the best team that Seattle can put on the field, but it's even less close to the best team that San Jose can put out, and I don't think this Earthquakes team is nearly as good as last season's edition, even without those absences. Seattle's thinness is in the attack, but the Earthquakes have holes throughout the lineup. I have a hard time predicting a road victory with two backups starting at forward, but if Seattle can force a goal through via a set piece or some magic from Zakuani, I think a point would be the minimum expectation. Surrendering two goals against this edition of San Jose should be considered a defensive failure.